SEAN: Next week is a very quiet week. I’ll take it!

ASH: A chance to at least pretend I can catch up on my reading! 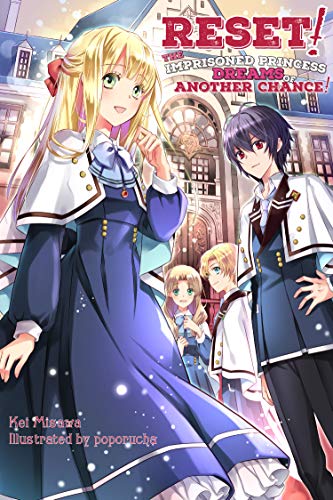 SEAN: Cross Infinite World has a debut light novel, Reset! The Imprisoned Princess Dreams of Another Chance! (Torawareta Ōjo wa Nido, Shiawasena Yume o Miru), a “Peggy Sue” style story along the lines of Tearmoon Empire, about a princess whose life and kingdom are destroyed finding herself a 12-year-old once more.

J-Novel Club has quite a few ongoing titles. Campfire Cooking in Another World’s 2nd manga volume, Der Werwolf 10, The Epic Tale of the Reincarnated Prince Herscherik 3, Fushi no Kami: Rebuilding Civilization Starts with a Village 2, Record of Wortenia War 9, Sorcerous Stabber Orphen: The Youthful Journey 2 (this is the manga), and A Wild Last Boss Appeared! 3.

In print, Kodansha has Beyond the Clouds 3 and The Quintessential Quintuplets 12.

Digitally, the debut is A Couple of Cuckoos (Kakkou no Īnazuke), the new series from the creator of Yamada-kun and the Seven Witches. It combines “accidentally switched at birth” and “arranged marriage”, and sounds sort of like an updated Marmalade Boy.

SEAN: Also digitally: Ace of the Diamond 30, Peach Boy Riverside 3, Practice Makes Perfect 4 (the final volume), Saint Young Men 9, The Story of Our Unlikely Love 2 (also a final volume), and We Must Never Fall in Love! 5.

MICHELLE: At last here are a few I plan to read!

SEAN: One Peace has Hinamatsuri 11.

ASH: Speaking of needing to catch up – I enjoyed the first few volumes of Hinamatsuri but keep falling further behind with the series.

SEAN: See? Super short. Anything here for you?