SEAN: No more small weeks anymore. All the weeks coming up are huge, huge, huge. Starting with next week.

Denpa gives us the 3rd volume of Today’s Menu for the Emiya Family, with Best Girl on the cover.

Ghost Ship has the 2nd Creature Girls volume, as well as To-Love-Ru Darkness 12. 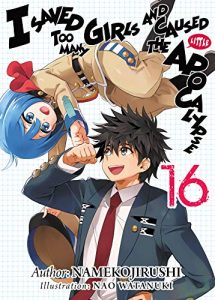 No debuts for J-Novel Club, but we do get the 16th and final volume of I Saved Too Many Girls and Caused the Apocalypse.

In print, Kodansha has erm… nothing. On to digital! The debut is Guilty (Guilty – Nakanu Hotaru ga Mi o Kogasu), a josei series that runs in Be Love, and judging by the cover seems to be Very Serious Indeed.

MICHELLE: I am intrigued.

ANNA: I am too, but I somehow almost never get around to reading the digital manga I buy.

SEAN: Digitally we also see Domestic Girlfriend 22, Fairy Tail: Happy’s Heroic Adventure 2, and The Prince’s Black Poison 10 (a final volume, I think), as well as the 10th GTO: Paradise Lost, the first volume in almost a year and a half.

Seven Seas has one debut, which digital readers will have seen already: the first of the Neon Genesis Evangelion: ANIMA novels.

Seven Seas also has a lot more, though. Alice & Zoroku 6, the 10th and final Dreamin’ Sun (yes, I know, it was here before, sorry, it slipped), Getter Robo Devolution 4, the print edition of Grimgar of Fantasy and Ash 11, The High School Life of a Fudanshi 5, the 3rd Mushoku Tensei novel in print, New Game! 7, and everyone’s favorite punching bag, Pandora in the Crimson Shell: Ghost Urn 12.

MICHELLE: Probably I said something like I still intend to finish Dreamin’ Sun, even though I prefer orange, and that is still true. 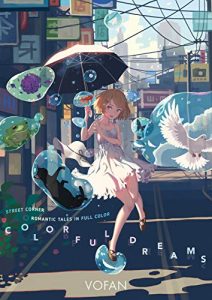 SEAN: Vertical has Colorful Dreams, an artbook of VOFAN’s non-Monogatari works. It is apparently super gorgeous.

Despite a number of delays, Yen does have quite a bit out next week. Yen On has one debut, The World’s Strongest Rearguard: Labyrinth Country’s Novice Seeker (Sekai Saikyou no Kouei: Meikyuukoku no Shinjin Tansakusha). Reincarnated Japanese dude in fantasy world, dungeon game stats, picking a seemingly weak job and making it the strongest – this ticks those boxes.

Yen On also gives us Bungo Stray Dogs 2 (the novel version), Final Fantasy XIII-2 Fragments After, Kingdom Hearts 3D: Drop Dream Distance, Magical Girl Raising Project 7, No Game No Life 9, Overlord 11, and Sword Art Online 17. Feels like the last three of those are the most important.

ASH: I should give the Bungo Stray Dogs novels a try one of these days.

SEAN: No debuts on the manga side, though we do get the 14th and final Prison School omnibus.

MICHELLE: I am so far behind on Silver Spoon. Sigh.

ASH: Totally worth making a point to catch up when you have the time!

SEAN: Do any of these float your boat? Or will you just ring and run?