SEAN: Usually the 2nd week of the month is the smallest one. NOT NEXT WEEK. 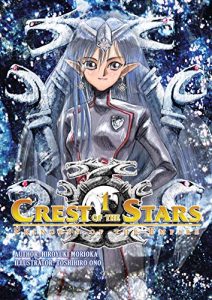 J-Novel Club debuts Crest of the Stars. Tokyopop released this way back in the day, but it’s been out of print forever, and I’m very happy to see it back with new translation and cover art. It’s also great science fiction.

ASH: I have at least one of the Tokyopop editions floating around somewhere; nice to see this series being revived.

ANNA: I think I missed this the first time!

MELINDA: I missed it, too!

SEAN: It also has How NOT to Summon a Demon Lord 9, and Seirei Gensouki: Spirit Chronicles 5.

Kodansha, print-wise, has Boarding School Juliet 6, That Time I Got Reincarnated As a Slime 10, Tokyo Tarareba Girls 7, and, for those with long memories, Noragami: Stray God 20. This was the HOT NEW SERIES till it hit the “caught up with Japan” wall.

MICHELLE: I watched a bit of the anime recently and it was pretty intriguing.

ASH: I haven’t seen the anime, but I’ve largely enjoyed what I’ve read of Noragami manga. Tokyo Tarareba Girls is a must-read series for me, though it packs quite a punch.

ASH: I’d likewise like to see it in print!

SEAN: One Peace has an 11th volume of The Rise of the Shield Hero. 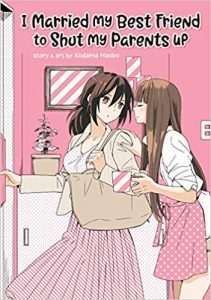 Seven Seas debuts I Married My Best Friend to Shut My Parents Up (Oya ga Urusai Node Kouhai to Gisou Kekkon Shitemita), which if nothing else has a very eye-catching title. It’s a yuri one-shot, which I reviewed here. It ran in Ichijinsha’s Comic Yuri Hime.

ASH: I’ve been curious about this one, and appreciated Sean’s review, so I’ll likely be picking the manga up.

SEAN: There’s also the print debut of Skeleton Knight in Another World, a light novel I was unable to finish the first volume of when it came out digitally.

ASH: Which reminds me I still need to read the first volume of Candy Color Paradox!

Vertical also announced that the first seven Monogatari Series novels are now available digitally! Great news for those of us phone readers. These are already out, so go get them. 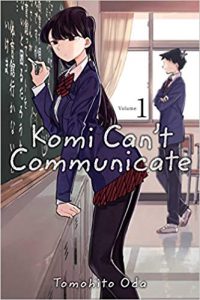 Viz’s manga debut is Komi Can’t Communicate (Komi-san wa Komyushou Desu), a Shonen Sunday title that I’ve really been looking forward to. Its premise may seem familiar: the cool and aloof beauty of the school is just really poor at socialization. It’s also a 4-koma, for those who seek out/avoid those.

MICHELLE: The covers for this series are really cute! It runs in Shounen Sunday, and I’ve liked slice-of-life shounen from that magazine before, so I’m hopeful about this one, 4-koma or not. (The best 4-koma is still Monthly Girls’ Nozaki-kun, though!)

ASH: Monthly Girls’ Nozaki-kun is the best of a lot of things.

ANNA: I’ll check it out.

MELINDA: I’m very hit-or-miss with 4-koma, but I’ll usually give it a chance.

SEAN: Viz also has a giant Evangelion artbook, with illustrations from 2007-2017.

And there’s Magi 36, Sleepy Princess in the Demon Castle 7, and Splatoon 6.

MICHELLE: I am hoarding Magi until the final volume. Just two more months!

ANNA: One of these days I’m going to do a full Magi marathon.

SEAN: See? Not a small week at all. What’s here for you?