Dark Horse has a 2nd volume of its manga adaptation of the 2nd Dangan Ronpa game.

J-Novel Club has the 2nd and final volume of Apparently It’s My Fault That My Husband Has the Head of a Beast, and the 12th and nowhere near final volume of In Another World with My Smartphone. 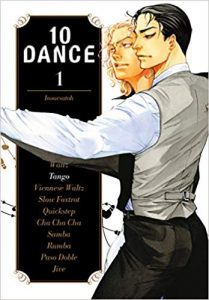 Kodansha has a bunch of debuts, and they’re even print! We start with 10 Dance, which combines BL and ballroom dancing, so sounds AMAZING. It runs in Young Magazine the 3rd.

MICHELLE: I am so looking forward to this. The cover and concept makes me think of the works of est em.

ASH: Yes! I am so excited for this one!

MELINDA: YES to this! I’m so excited!

SEAN: Hitorijime My Hero is a spinoff of a title that used to be released digitally here by JManga, but no doubt stands up fine on its own. I gotta be honest, this student/teacher BL story excites me far less than 10 Dance. It runs in Ichijinsha’s Gateau.

MICHELLE: I’ve seen a couple episodes of the anime and liked it, but I never got far enough for anything particularly problematic to happen. We’ll see how it goes, I guess.

SEAN: And on the yuri end (hey, when Kodansha decides to do new genres, they go all in), we have Yuri Is My Job! (Watashi no Yuri wa Oshigotodesu!), from Ichijinsha’s Comic Yuri Hime. A girl ends up working at a yuri café, but behind the scenes things aren’t quite as yuri… or are they?

ASH: I’m very happy to see Kodansha starting to release BL and yuri titles in print. I hope the venture does well for the company so we might see even more!

SEAN: Kodansha also has Golosseum 5 and Waiting for Spring 10 on the print end, as well as Ace of the Diamond 19, Ao-Chan Can’t Study! 4, the 8th and final Aoba-kun’s Confesssions, Blissful Land 2, Kakafukaka 4, and PTSD Radio 6. Looking forweard to Ao-chan and Kakafukaka.

MICHELLE: For a second, my brain interpreted the word “radio” to mean that we were getting more Wave, Listen to Me, but not yet, sadly.

ASH: That would be nice. 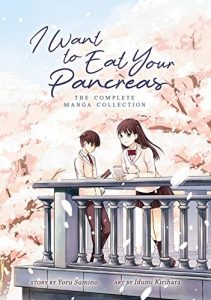 SEAN: Seven Seas has a mere two titles next week. We get the manga adaptation of I Want to Eat Your Pancreas, which should be as heartrending as the book was. It’s a complete omnibus edition, and ran in Futabasha’s Monthly Action. There’s also the 2nd print volume of light novel How a Realist Hero Rebuilt the Kingdom.

ASH: I still need to pick up I Want to Eat Your Pancreas in one form or another; I’ve heard good things.

MELINDA: I should do the same.

SEAN: Vertical gives us a 3rd volume of The Delinquent Housewife!.

SEAN: And now Yen. There were a few titles delayed till the final week in January, but for the most part it’s all next week. On the light novel front, the most interesting title may be The Kids Are Alright: A Turks Side Story. This is a Final Fantasy VII novel.

Also out in novel form is Death March to the Parallel World Rhapsody 7, Goblin Slayer 6, Overlord 9, A Sister’s All You Need 3, and Strike the Blood 11. An off month for me, as Strike the Blood is all I’m getting of those titles.

There are four debuts next week, some of which may even interest the rest of Manga Bookshelf. First we have DIVE!!, which is, oddly, a remake of a manga that ran in Shonen Sunday back in the 00s. This one is from Young Ace, and the premise is the same: let’s save the diving team from getting shot down. If you like sports manga, or the anime Free!, you’ll like this.

MICHELLE: What troubles me is the long list of credits on this one. I’ll give it a shot.

ASH: I’m hoping the original light novels will be licensed and translated at some point, too.

SEAN: From the sublime to the ridiculous, we then get Monster Wrestling: Interspecies Combat Girls. It runs in Monthly Comic Ride. I guess if you like the other vaguely softcore Yen monster titles you’ll like this? Hard pass from me. 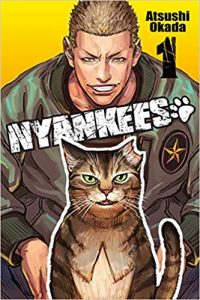 Nyankees is the delinquent manga you never knew you wanted, showing stray cats as if they were in teenage hoodlum gangs. I must admit I really want to read this. It runs in Shonen Ace.

MICHELLE: I really want to read this, too!

ANNA: Based on the description, I feel happy that something like this exists in the world.

ASH: I’m so looking forward to this series!

MELINDA: I’m so on board for this.

SEAN: Lastly we have The Witch’s House: The Diary of Ellen. This may sound like an OEL project like the James Patterson books, but no. It’s Majo no Ie: Ellen no Nikki, a harror manga that ran in Kadokawa’s Dragon Age.

There’s more Yen too, of course; Based on light novels, we see A Certain Magical Index 16, Death March to the Parallel World Rhapsody (manga version) 6, DanMachi 10, DanMachi Sword Oratoria 6, and The Saga of Tanya the Evil 5.

SEAN: A lot of debuts next week. What interests you most?