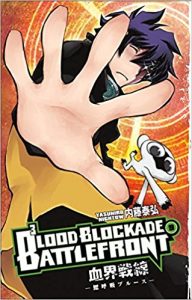 J-Novel Club has, after a brief hiatus, new volumes for Demon King Daimaou (4) and I Saved Too Many Girls and Caused the Apocalypse (7).

Kodansha Digital has a new release, Liar x Liar. It’s a shoujo manga from Dessert, about a girl who pretends to be someone else to hide her identity from her stepbrother… then begins dating him? I think I will pass.

ANNA: There’s a lot of other Kodansha Digital manga that I would get caught up on before trying this.

And if you like print, there’s a 5th volume of Waiting for Spring.

MICHELLE: Yay! And no easily dupable stepbrothers in sight.

ASH: I do in fact like print! And I’ve been enjoying Waiting for Spring, too. 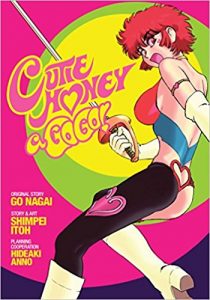 SEAN: Seven Seas has Cutie Honey a Go-Go!, a recent variation on the classic Go Nagai manga (which Seven Seas will also be releasing later in the year). I’ve actually heard good things about this variation, so am looking forward to it.

SEAN: They’re also debuting New Game! This is about a young graduate who looks middle-school aged and her adventures at a game company. It’s a 4-koma, and runs in Houbunsha’s Manga Time Kirara Carat. It had an anime.

And we also get Soul Liquid Chambers. Zombies, nudity, blood and gore, fanservice, and it runs in Shonen Gahosha’s Young King Ours GH, home of many other titles with ‘ecchi’ in their descriptions. I… think I will pass. Again.

SEAN: In terms of ongoing series, Seven Seas has Devils and Realist 14, Shomin Sample 8, and There’s a Demon Lord on the Floor 5. And Don’t Meddle with My Daughter comes to an end with its third volume. 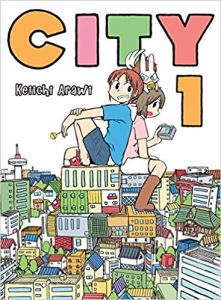 Vertical debuts CITY, a new series from the creator of Nichijou. I look forward to seeing if it’s still very funny and strange, or slightly more normal.

Vertical also has a Seven Deadly Sins novel, Seven-Colored Recollections, which seems to be a short story collection.

Yen On also gives us the remainder of Kieli digitally, with Vols. 6-9. This completes that series.

Yen On has no debuts this month, but we do see Durarara!! 9, The Irregular at Magic High School 7, Magical Girl Raising Project 3, Re: Zero EX 2 (the last volume to date of this side-series), The Saga of Tanya the Evil 2 (which is EVEN LONGER than the first), So I’m a Spider, So What? 2, and the 19th Spice & Wolf. That’s a lot of light novel.

ASH: That it is! I’m not following as many series as I once was, but I’m very happy that so much is being translated.

SEAN: There are also a few manga out, though a lot of March’s releases were pushed back to mid-April. Forbidden Scrollery (aka the Touhou manga) has a 2nd volume, Graineliers has its 2nd book, Horimiya has its 10th volume, and there’s a 15th Spice & Wolf manga.

MICHELLE: Yay for Horimiya. Despite the endless stuff, looks like I only really like two titles this week.

ASH: I’m interested in seeing how Graineliers develops; the first volume was a little uneven, but had potential.

SEAN: And we have a debut: Laid-Back Camp (Yurukyan △). It’s also a Houbunsha title, from Manga Time Kirara Forward, about girls who camp. It also has an anime. I believe the symbol in the Japanese title is meant to be a tent. Which should tell you what level we’re going for here. The level of CUTE.

ASH: I suspect this won’t be The Summit of the Gods, but I do like camping enough to give the series a try!

SEAN: Does this whet your appetite? Are you starving for titles now?