SEAN: A new year, new manga, and new series to get way behind on. 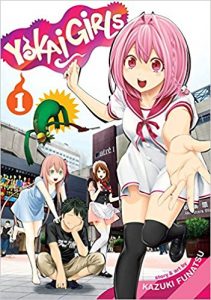 SEAN: Ghost Ship has a debut, Yokai Girls, perhaps the most unsurprising license ever given ecchi yokai series are the new zombies. This ran in Weekly Young Jump, and is about ghosts and fanservice, not in that order.

ASH: I’ll usually give anything having to do with yokai at chance, but it may take a while for me to actually get around to trying this series.

SEAN: J-Novel Club has quite a few releases, starting with Ao Oni, a horror series that’s based on a video game, and very much in the “kill the cast off over and over” genre.

In Another World with My Smartphone has a 6th volume, this one focusing on Touya’s youngest love interest, Sue, and her attempts to not be married off.

And Invaders of the Rokujouma!? goes back to finish its side story with Vol. 8.5.

Kodansha has a lot, as you’d expect, mostly digital. Actually, entirely digital. On the Del Rey rescue end, we have a 17th Pumpkin Scissors. Newer titles include Ace of the Diamond 7, Ayanashi 2, Drifting Dragons 2, Real Girl 10, and Space Brothers 31.

MICHELLE: Ace of the Diamond is a lot of fun.

ASH: As usual, I’m glad that so much manga is being translated, but I really hope more of Kodansha’s digital-only titles turn out to be digital-first.

SEAN: Seven Seas gives us a 5th Dreamin’ Sun and a 7th Not Lives.

Their debut is a spinoff of Miss Kobayashi’s Dragon Maid, entitled Kanna’s Daily Life. Given Dragon Maid doesn’t have much of a plot, I can’t imagine how much more slice of life it can get, but… 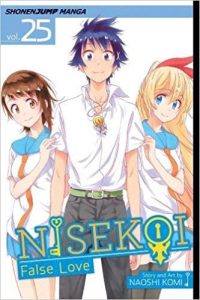 Viz time. No debuts this time around, but Nisekoi is coming to an end with its 25th volume. Given how poorly romantic-oriented Jump titles have done over here before (looking at you, Strawberry 100%), it’s impressive to see how popular Nisekoi was… at least until fans knew which girl one, at which point the knives came out, as always. Oh well.

MICHELLE: Haikyu!! is ever a favorite.

ASH: I’ve fallen a bit behind, but I enjoy Haikyu!! immensely.

There’s also a 5th 3-in-1 of Rurouni Kenshin (still not cancelled, though Japan cancelled the sequel series), an 11th Twin Star Exorcists, and an 18th World Trigger, which was the last volume out before its current hiatus.

On the shoujo side, there’s a 6th Anonymous Noise, a 28th Kimi ni Todoke (which just ended in Japan, I believe), a 21st Natsume’s Book of Friends (yay!), and the 4th Water Dragon’s Bride.

MICHELLE: I will be reading all four of those, though I am also most “yay!” about Natsume’s Book of Friends.

ASH: It appears I will be echoing Michelle, again. Yay, Natsume! I need to get caught up on Water Dragon’s Bride, too.

ANNA: I’m most excited about Water Dragon’s Bride. It is such a consistently great series.

SEAN: Do you have something you want here?