SEAN: Well, it would be a quiet final week of 2017… were it not for Kodansha, who are determined to break us.

First off, yes, they did it again. Out already is Living Room Matsunaga-san, a title that was announced after Manga the Week of went to press. It looks like a typical shoujo title from Dessert.

MICHELLE: So far, I feel kindly disposed enough toward Dessert titles to give this one a look. 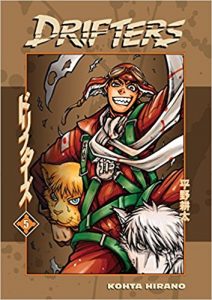 SEAN: Dark Horse has a 5th Drifters, whose volumes come out so infrequently I tend to forget what’s going on beyond “crazy faces”. Which, honestly, is probably for the best.

J-Novel ends two of their ongoing light novel series next week. Bluesteel Blasphemer wraps up with its 4th volume. And, while it’s not an official “ending”, My Big Sister Lives in a Fantasy World has no current plans for new volumes after Vol. 7.

Kodansha. Wow. They have print! We get new volumes of Attack on Titan: Before the Fall (12), Land of the Lustrous (whose anime has really exploded in Western fandom) (4), Love & Lies (3), and That Time I Got Reincarnated As a Slime (whose novel came out last week from Yen) (3).

ASH: Despite not always completely understanding what’s going on in Land of the Lustrous, I am enjoying the series and its striking artwork.

SEAN: We have digital debuts! Yes, and I actually know about them in advance. My Boyfriend in Orange is, yes, another Dessert title (Dessert is the new Betsufure). This time the boyfriend seems to be a firefighter. Pitch-Black Ten runs in Shonen Magazine R, and seems to be a supernatural series.

MICHELLE: I could cut and paste my line from above here, too. It’s not that I really crave a romance series with a fireman in it, but eh. Okay. Why not?

ANNA: Sure, why not?

SEAN: We have ongoing digital series! Piles of them. I think I got them all. DAYS 7, Domestic Girlfriend 13, Drowning Love 7, The Full-Time Wife Escapist 8, Giant Killing 9, House of the Sun 13, I Want to Hold Aono-kun So Badly I Could Die 2, Kounodori: Dr. Stork 7, Love’s Reach 6, and Peach Heaven 12. As always, I’m all about Wife Escapist, but I believe Michelle will be looking at the soccer.

MICHELLE: I will be looking at the soccer *and* the spouses! (But probably, yes, I do love Giant Killing the best.)

ANNA: So far behind on Wife Escapist. I will not give up though! 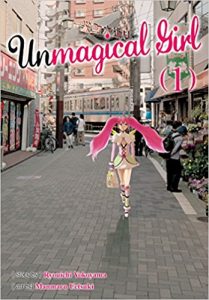 SEAN: There are publishers other than Kodansha with titles next week, oddly enough. Seven Seas’s debut is Unmagical Girl, a comedy series about a fictional magical girl who’s somehow brought into reality, and now has to cope with everyday life. I’m just happy to have a magical girl series that it’s “let’s kill the magical girls”. It apparently ran in a Pony Canyon magazine, but I think the license may have gone through Ichijinsha.

Seven Seas also has a 2nd Absolute Duo, a 4th Magical Girl Site (which is absolutely about killing magical girls), and a 4th Species Domain (which is actually pretty cute).

SuBLime has a 4th volume of The Night Beyond the Tricolored Window, which looks dramatic as hell.

MICHELLE: I love this series so much and have been eagerly anticipating volume four for a year!

ASH: I want this series in print so much!

MICHELLE: So do I! Even though I don’t mind reading digitally, I crave that extra security you feel when you own a tangible copy of something.

Lastly, Yen Digital has a 4th IM: The Great Priest Imhotep, who is still invisible, I believe. (I will never stop making that joke, sorry.)

Are you getting anything from this? Or still catching up with this week’s avalanche?