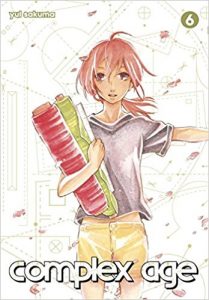 Kodansha has the final volume of Complex Age, Vol. 6, which I found a little TOO realistic for my tastes, but it was very well written.

MICHELLE: Volume five was less painful than volume four, though I am still nowhere near certain that we’re going to get a happy ending.

ANNA: I’m way behind on this series but still interested in it!

ASH: Same! The first volume left a deep impression on me, and the other volumes I’ve read were likewise very strong. I’ll definitely be reading the rest.

Fuuka hits Vol. 14, despite still being written by Seo Kouji.

And there is a 12th volume of Kiss Him, Not Me!, which is The Wallflower for the millennial generation.

ASH: I’ll admit, I’ve fallen behind on the series. But while are parts of the story I’m not fond of, I do like the manga overall.

SEAN: If you didn’t get burned out by the heroine of Mikagura School Suite’s light novel, One Peace has Vol. 1 of the manga. 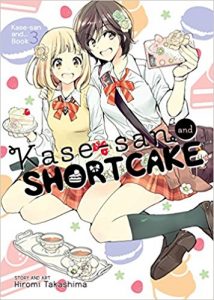 Seven Seas is next. The third Kase-san And… volume, which of course has no actual numbers, is Kase-san and Shortcake. It promises to be adorable.

SEAN: Monster Girl Encyclopedia sure was popular with a certain type of fan. If you are that type of fan, there is a 2nd volume.

Non Non Biyori’s cast continues to do not very much in a cute way with this 8th book.

And we also get a print version of the second volume of Occultic;Nine, whose digital edition came out from J-Novel Club.

SuBLime has a 5th volume of Don’t Be Cruel, which is not subtitles To A Heart That’s True, but should be.

ASH: I haven’t read the series proper yet, but the first volume of the side stories was entertaining.

SEAN: And we also get the 7th and final volume of Love Stage!!, which can now pass on its extra exclamation marks to needy new manga.

SEAN: Vertical has a 5th volume of the Master Edition of BLAME!.

ASH: For anyone interested in Tsutomu Nihei’s artwork, this is absolutely the edition to pick up.

SEAN: Lastly, Viz’s poster child for “do scanlations hurt sales?”, Hayate the Combat Butler has finally hit Vol. 30. I eagerly await it, though I may be totally alone there.

Hey, a light week! Relax, or buy something from this list?

ASH: Until now, I didn’t realize that light weeks even existed anymore!