And also a second volume of Infinite Dendrogram, which seems to be… just about a gamer in a VR world. What, he’s not trapped or anything? Pff. 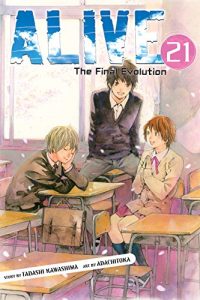 Another Del Rey rescue bites the dust with the 21st and final volume of Alive.

ASH: It’s been a long time since I’ve read the beginning of Alive. Now that the series has been completed, maybe it’s time I revisit it.

SEAN: Aho Girl was amazingly stupid but amusing, so I look forward to Volume 2.

On the digital front, Altair: A Record of Battles has a 3rd volume.

And on the Michelle front, there’s a 4th DAYS.

MICHELLE: Heh, you know it! Also, I really do need to read Altair.

ANNA: I haven’t read the first volume of Altair yet, but I will!

SEAN: The title that nobody remembers (even Amazon, who hasn’t listed it), we get a 3rd DEATHTOPIA from the creator of Cage of Eden.

ASH: I want this series in print so, so much! The anime adaptation was great, too.

SEAN: House of the Sun got of to a fast start but slowed down after that. Here’s a 6th book.

MICHELLE: I’ve started this series but struggled to connect with the characters. I haven’t given up, though. 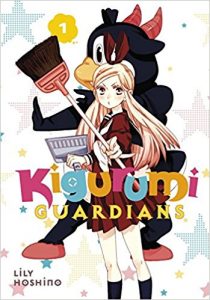 SEAN: Briefly back to print for a debut. Kigurumi Guardians is a shoujo title from Nakayoshi, but its creator, Lily Hoshino, is better known for her BL titles. No surprise then that this manga has a lot of pretty boys.

MICHELLE: I’m hoping this is fun.

ASH: Hoshino’s manga can be a little hit-or-miss for me, but I’m definitely curious.

ANNA: Hmm, I am curious too!

SEAN: Another forgotten by Amazon digital title, B&N lists a 29th Space Brothers volume. Apologies for forgetting to mention the first 28 or so. It’s a great series.

SEAN: Seven Seas has a sea of titles next week, including three debuts. The first is Absolute Duo. It’s based on a light novel. It’s from Comic Alive. It takes place at an academy filled with fighting. My lineface can possibly be seen from space, but I’ll add it just in case. :|

SEAN: Akashic Records of Bastard Magical Instructor is another debut this week. It’s based on a light novel. It’s from Shonen Ace. It takes place at an academy filled with fighting. :|

SEAN: A Certain Scientific Accelerator has hit its 6th volume, and despite ALSO being a spinoff of a light novel title that runs in an otaku-oriented magazine and taking place at an academy filled with fighting, I quite enjoy it. 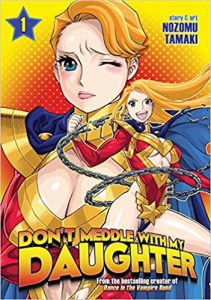 Theoretically, Don’t Meddle with My Daughter should get points for at least NOT being based off a light novel or taking place at an academy of fighting students. However, it runs in Young King and apparently has two doujinshi sequels by the author that are actual porn, so let’s just say my hopes are not high. It’s about a retired superhero mom who returns to action to protect her daughter, who is now taking over the family business, so to speak. Oh yes, it’s also by the creator of Dance in the Vampire Bund. It’s almost the perfect anti-Manga Bookshelf title.

ANNA: It could be the Manga Bookshelf Kryptonite.

SEAN: And along the same lines, we have a 12th Monster Musume, which can be very ecchi. And not only that, but…

On the Vertical front, there is a 9th Cardfight!! Vanguard, which has fights… with cards! (Yeah, yeah, shut up.)

Vertical also has the 2nd Nisemonogatari novel, Tsukihi Phoenix, which features the youngest of the Araragi siblings, though honestly Karen’s toothbrushing scene will likely get all the attention. Also, are fans still going to be dagnabbit mad? Probably.

Yen has some digital titles, with new Corpse Princess (12), Gesellschaft Blume (2), IM: Great Priest Imhotep (2), and Saki (12). Something for everybody.

SEAN: And of course there’s always a Yen straggler, and next week it’s Dimension W’s 7th volume. Why they always delay one or two books to the next week, I dunno. It’s one of those manga mysteries.

As you can see, there is much to choose from, though my colleagues may be staring at this and saying “Yeah, um…” So what are you getting?