Dark Horse gives us a new volume of Drifters, the 4th. It comes out sporadically, so I will no doubt have to refresh my memory about what’s happening besides cool old famous people reincarnated and fighting each other. Actually, no, that should do it.

ASH: Let’s see, the last volume was released in English in… 2014. I didn’t expect that we’d ever see more of the series! I suspect that last year’s anime adaptation may have something to do with that.

SEAN: And there is a 4th omnibus of “Like Evangelion, only stupider” spinoff manga Shinji Ikari Raising Project. 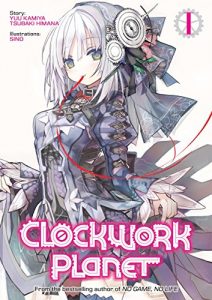 J-Novel Club has a new debut, but it may seem familiar: Clockwork Planet, whose manga adaptation Kodansha has been releasing. This is their first Kodansha license, and will hopefully open the way for more in the future.

And we have the 4th In Another World With My Smartphone, which I hear is where the plot really kicks off.

Kodansha has titles both digital and print. Digitally we have the 2nd Altair: A Record of Battles, which is clearly not on the fastrack like some other digital titles.

ANNA: Good reminder for me to read the first one!

SEAN: And the 2nd Aoba-kun’s Confessions as well.

I was unprepared for the Attack On Titan: Before the Fall adaptation to be this long, but here we are, Volume 11. Huh.

ASH: I’ve fallen behind, but I do largely like how the manga further develops and expands the story and characters from the original light novels.

SEAN: Back to digital with the 5th Full-Time Wife Escapist. Will these two poor communicators finally get together?

ANNA: I enjoy this series!

MICHELLE: Me, too. I’m always happy when I see a new installment on the schedule.

SEAN: And L♥DK has hit double digits, and presumably has not run out of ways to frustrate its heroine.

Seven Seas has the most titles out next week. There’s a lucky 13th volume of Devils and Realist.

And the 2nd print volume of the light (hah!) novel Grimgar of Fantasy and Ash.

Miss Kobayashi’s Dragon Maid will try to ride out the post-anime depression with its 4th volume. 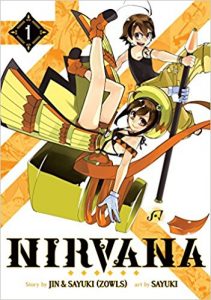 The debut next week is Nirvana, an action fantasy with a “trapped in another world” veneer, the gimmick being the protagonist is female for once. It’s written by Jin, the creator of Kagerou Daze, and runs in Comic Gene.

Not Lives gives us a 6th volume. Has the cast diminished yet?

Also at double digits next week is Servamp. (poses) Vampires! (peers around, crickets chirp) Could it be the running gag has gone on too long?

SEAN: SuBLime has a digital-only release next week with Am I In Love Or Just Hungry, from popular author Akane Abe.

In print, they have the 2nd Deluxe Edition of Finder.

And the 5th volume of Ten Count, which has managed to irritate most of Manga Bookshelf by now.

ASH: I’m still reading it, though I completely understand why people dropped the series. The character’s relationship is far from healthy–right now to me it actually reads more like a horror manga and less like a romance.

SEAN: Viz has a 5th digital release of The Children Nowadays, whose existence I keep forgetting.

In print, they have the 21st volume of Itsuwaribito, which must be reaching a climax of some sort, I say as if I read past Vol. 1.

And a 2nd Legend of Zelda: Twilight Princess.

ASH: I’m enjoying this adaptation so far; I’m also glad that it doesn’t end with the second volume.

SEAN: Magi has reached 25 volumes! In Japan it’s wrapping up, here we still have a ways to go.

MICHELLE: I’m always kind of relieved to hear a series is ending. It’s probably the reassurance that I’ll actually get the complete story.

SEAN: Lastly, we have a 9th volume of Monster Hunter: Flash Hunter, which wars with Yu-Gi-Oh in how often it ends a Manga the Week of column and leaves me with nothing to say.

What do you say? Anything for you next week?