MELINDA: Wow, it’s been… a long time hasn’t it, my friend?

MICHELLE: I am scared to even verify how long it has been. A couple of years, at least!

MELINDA: So what’s brought us here today is the boys’ love series Ten Count (volumes one

) by Rihito Takarai, published here by SuBLime. From what I understand, the series has reached five volumes (ongoing) in Japan. The third volume is due out from SuBLime next month. 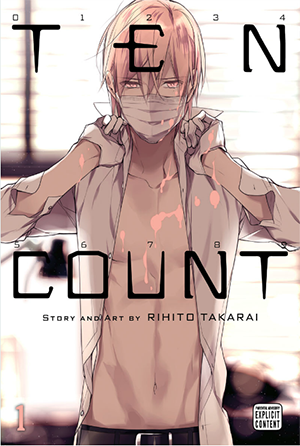 Shirotani is a lifelong germaphobe, resigned to his condition, though it keeps him isolated from others. Fortunately, with the help of his understanding employer, he is able to tolerate his job as secretary to a corporate CEO. It is in the corporate line of duty, then, that he first meets Kurose, a therapist at a local mental health clinic. Kurose notices Shirotani’s condition immediately, and suggests he seek help, but though Shirotani is able to make his way to the clinic, he can’t bring himself to go inside. Acknowledging this difficulty, Kurose offers to help him in a non-clinical capacity, as a friend, an arrangement to which Shirotani eventually agrees. As Kurose slowly helps him accomplish progressively difficult tasks (touching a doorknob with his bare hand, buying a book from a bookstore), the two become close in ways that complicates their relationship and threatens the fragile boundaries between them.

Fans of BL manga don’t need me to explain what that means, or probably why my greatest fear with this series would be that the therapist/patient dynamic (even in the context of them being “friends”) would create a problematic imbalance of power. And it does, though not right away. Had I read only the first volume, this paragraph would be a very different one, gratefully dismissing my fears and filled with satisfied discussion of their slowly-evolving relationship and lots of talk about how that kind of careful development is so rare and wonderful in this genre. Had I read only the first volume, I would have declared a lot of love for this series. Unfortunately, Kurose’s careful handling of Shirotani is abandoned less than two chapters into the second volume, when after declaring his love for Shirotani, he mercilessly forces him into accepting sexual contact (against Shirotani’s clear protestations), which only escalates as the volume continues. In fact, Shirotani’s germaphobia makes the situation even more brutal, as Kurose is not only performing non-consensual sexual acts with Shirotani, but also blatantly ignoring Shirotani’s boundaries regarding skin-to-skin contact without any of the thoughtful consideration he promised as part of their initial arrangement. It’s obvious that the author intended the germaphobia as a metaphorical stand-in for the typical uke resistance so popular in BL, but instead it just feels like piling on.

MICHELLE: What I found most interesting to contemplate is that Kurose does, in fact, give Shirotani opportunity to object. He warns him that he’s going to attempt these kinds of things if they continue to see each other, and asks questions like, “Did you really not like what we did a moment ago?” Sometimes, Shirotani is able to give voice to his objections, but he also holds back his disgust, and I have to think that’s because he doesn’t want to drive Kurose, the only person to whom he has any kind of close relationship, away. How much, then, does Shirotani actually reciprocate and how much is he just desperate to keep Kurose in his life?

If I had faith that Takarai was wanting us to consider this question in a thoughtful way, I’d be fairly happy. But there are a few comments, mostly in bonus stories or author asides, that make me think she is setting up a dominant/submissive paradigm in which Kurose simply enjoys seeing Shirotani squirm, and that is very troubling indeed.

MELINDA: Yeah, you’re right—he often does ask Shirotani for permission to do something, or for confirmation that he’s enjoying himself, but those check-ins feel pretty empty, considering the fact that he generally moves on with what he’s doing without anything resembling actual enthusiastic consent. And if she’s trying to set up a dominant/submissive relationship, she’s doing it 50 Shades style, which only furthers my discomfort. Kurose’s behavior becomes increasingly controlling over the course of the second volume, by the end of which he has not only violated most of Shirotani’s personal and sexual boundaries, but also has begun infantilizing him to a truly creepy degree. Between declaring a preference for a “childlike” hairstyle and outright asking Shirotani to agree to be “dependent” on him, Kurose has basically given up any pretense of respect or even basic acknowledgement of Shirotani’s agency as an (older!!) adult man. It is a testament to the strength of the series’ first volume that I’m even still reading this thing. But I would be lying if I said that it hadn’t broken my heart.

I understand that rape fantasy is a thing, and that it’s in poor taste to judge other people (especially femme-identified people, who are this genre’s target audience) for such fantasies. And on some level, I even understand a bit why someone’s fantasy might include giving up control, though I’d probably understand that better if we lived in a world where acknowledgement of a woman’s control over her own body was not considered a radical political act. I also understand that it’s, at the very least, pointless to wish for a story to be a different one than what its author wants to tell. I know that I should simply accept that something is not for me and move on. But after a full volume of something that *seems* to be for me, that truth can be difficult to swallow. 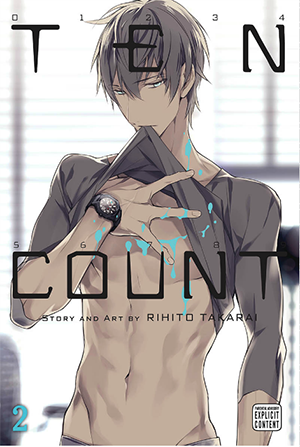 MICHELLE: Another thing that strikes me about the questions Kurose poses is how detached and clinical they can seem, even after a sexual act. One example is, “Were you more concerned with the possibility that I found you unpleasant than whether or not you found the situation itself unpleasant?” Leaving aside the tacit admission that he knows Shirotani could’ve been finding the situation unpleasant, attempting to reassert the therapist/patient dynamic at such a moment is, well, kind of creepy.

I’m not ready to give up on the series yet. Like I said, I want to believe Takarai is trying to make a more subtle point here, but I just don’t know. If volume three is more of the same, it might be too much for me, too.

MELINDA: Upsides of this series that extend beyond its fairly awesome first volume include Shirotani’s sweet, understanding boss, whose constant mindfulness regarding Shirotani’s discomfort and physical boundaries paint a picture of a pretty awesome guy. Similarly, Shirotani’s acquaintance from his company’s sales department, Mikami, proves himself over and over to be a good friend and a stand-up guy. It’s a shame that these characters, who operate without personal motive and truly seem to have Shirotani’s best interests at heart aren’t the people he trusts most. I can’t help but think that if either of them knew what was going on, they’d be the first to jump to Shirotani’s defense and help him get the hell out of the abusive relationship he’s been lured into by Kurose.

MICHELLE: I liked them, too! I really wanted to believe that Shirotani was indeed able to make progress in his therapy with Mikami, as he initially claimed to do, though we later learn he was lying in hopes that he could resume seeing Kurose. Perhaps it was some kind of self-fulfilling prophecy, in a way. Like, he tried with Mikami, and had no success, and now he believes that Kurose is the key to moving forward, thus increasing his dependence. He is able to achieve some things for these people in his life, though, like when his desire to find a book to entertain his hospitalized boss results in a successful purchase at a bookstore.

Regarding Kurose and his motivations, do you think there’s still some reveal to come? When he has Shirotani write out the list of ten activities he feels aversion for, with ten being something he thinks he could never do, Shirotani leaves that one blank. Kurose refuses to divulge his reasons for helping Shirotani on his own time until Shirotani fills in that tenth item. Do we already know that it’s because he was falling in love? Or is it something like, “I’m secretly a major sadist”?

MELINDA: That’s a really good question! I feel like I have no idea. I mean, on one hand, things have gone so far at this point I’m sort of just expecting the usual “tortured uke” trope to continue from this point, with more and more uncomfortable sex scenes and less and less real storytelling. So I’m not as optimistic as I’d like. On one hand, the series obviously continues beyond this, but I wonder if it will continue to really explore and examine this relationship or whether it will just turn to side characters like so many deceivingly-long BL series do.

Your whole first paragraph, though, just reminds me how much I loved the first volume! Gah! I want to be optimistic!

MICHELLE: So do I, and part of me thinks there’s still room for something great to evolve from this. I’m thinking of Tomoko Yamashita’s marvelous The Night Beyond the Tricornered Window, actually, in which no sexual contact has occurred, but in which one lead (Hiyakawa) casually appropriates the body of the other (Mikado) in a way that alarms others but which the affected party chooses not to think too deeply about because with Hiyakawa around, he no longer feels alone or potentially crazy for his ability to see spirits. There are some definite parallels to Ten Count there, but Yamashita is more clearly going into a psychological direction with her story, whereas Takarai seems to be taking a more traditional, explicit route.

I will still read volume three, though. How about you?

MELINDA: I will probably give this series one more volume, yes, even though I don’t feel as optimistic as I wish I did. Also, I’ll second your shout-out to The Night Beyond the Tricornered Window, which manages to talk about consent more thoughtfully, despite its supernatural premise. In that series, there is at least another character screaming out, “THIS IS NOT OKAY” all the time, so that we’re aware that the author knows there is a problem. It makes all the difference in the world.

MICHELLE: Indeed it does.

MELINDA: Bottom line, though this series starts off as a thoughtful look at the slow development of a tricky but potentially important relationship between a lonely professional who becomes friendly with a younger mental health specialist, its second volume takes a dark turn, devolving into a tale of emotional abuse, sexual assault, and deeply broken trust. We’ll probably keep reading it, but buyer beware.