SEAN: Are you giving thanks for so much manga? Hope so, as there is SO MUCH.

ASH: I always give thanks for manga!

SEAN: Kodansha has a bunch of stuff. A 5th Forget Me Not should please romance fans. 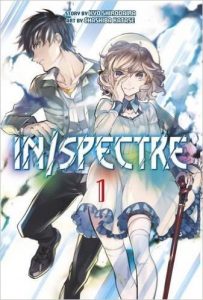 MELINDA: Hmmmm, maybe me too.

SEAN: The Prince and His Dark Days has a 2nd volume, which I’m hoping is a bit less Dark Days, to be honest.

ASH: It does seem to be an aptly named series.

SEAN: Real Account has its 5th volume – though technically this is the third volume of Real Account II. The distinction is something no one would ever notice, but that’s why I’m here.

ASH: Huh. I was unaware.

SEAN: Lastly, a third volume of Tsubasa World Chronicle, which I haven’t tried yet. Have Michelle or Melinda?

ANNA: I am saddened by how indifferent I am to CLAMP when I used to love them so much.

MELINDA: I haven’t, which surprises me more than anyone, honestly.

SEAN: One Peace has a 6th novel of Rise of the Shield Hero. I would think he’d have risen by now – even Christ only took 3 days.

Seven Seas gives us a 5th and mercifully final omnibus of I Don’t Like You At All, Big Brother!!.

Magia the Ninth is their first debut, another Gene Pixiv title (which I think is Media Factory’s equivalent to Zero-Sum or Wings), from the creator of Black Bard. The plot is essentially “classical music composers hunt demons”.

ASH: Okay, I can’t help it, I really want to read this series. And I did rather enjoy Black Bard.

MELINDA: Sean knows he can get my attention by invoking the names “Zero-Sum” and “Wings.” So. Yes.

SEAN: In case you worried there were no monster girls this week, well, there’s monster guys, as we get a 5th Merman in My Tub. 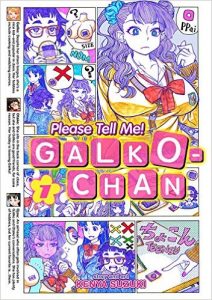 The other debut is Please Tell Me, Galko-chan!, a comedy title that runs on the Comic Walker website. It seems to involve a blunt girl and her friends.

ASH: I’ve heard good things and so am curious.

SEAN: And the title that always gets me mixed up, The Testament of Sister New Devil, has a 4th volume.

Vertical has another spinoff novel in the Attack on Titan series, called The End of the World. It’s a novelization of the live-action movie.

And there’s a 3rd volume of To The Abandoned Sacred Beasts.

The rest is Yen, though it’s not even all of Yen – they pushed a few titles back to the week after next. For Yen On, we have a 3rd volume of The Isolator, the dark thriller from the creator of Sword Art Online.

Black Butler is still popular, I hear, even in these days of Monster Girls. Vol. 23 is out next week.

And popular as well is BTOOOM! 15, which may never really surpass that whole ‘bomb bounces off the boob’ scene that is the only reason anyone remembers it.

Corpse Party: Blood Covered has a 3rd omnibus of, well, blood and corpses, no doubt.

Fruits Basket has a 7th omnibus, as past traumas collide with present abuse to hopefully lead to future healing.

SEAN: There’s a 6th volume of the Danmachi manga, aka Is It Wrong To etc etc etc.

And a 6th Karneval omnibus as well. 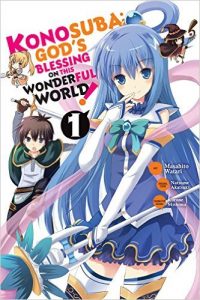 Another title better known by its fan nickname, Konosuba: God’s Blessings on This Wonderful World! *still* ends up being a mouthful to say. It’s a parody of ‘guy ends up in fantasy game world’ titles, is based on the light novel due out here next year, and runs in Dragon Age, which means it must have fanservice.

Always welcome on my shelves, we have a 5th volume of Monthly Girls’ Nozaki-kun, which means more hilarious tsukkomi faces.

MICHELLE: I recently watched some of the anime on Crunchyroll. It’s pretty great!

SEAN: There’s a 9th volume of the Watamote manga, aka No Matter How I Look etc etc etc.

Madoka Magica now has spinoffs or spinoffs, as the Oriko Magica spinoff gets a new side-story, Sadness Prayer. Given it’s Madoka Magica, I think sadness is guaranteed.

Rose Guns Days begins its Season 2 arc. Will Rose be able to get by without Leo?

School-Live! has a 5th volume of friendship and zombies.

I always love it when a title and its volume match. Have Trinity Seven Vol. 7.

Yen’s big debut is another title from Natsuki Takaya, creator of Fruits Basket. Back in the day, there was thought to be a licensing war over this series, but nothing came of it. Now we get Twinkle Stars in omnibus format. It’s about half the size of Fruits Basket, but has the same amount of drama.

MICHELLE: I’m so happy about this. I read the Australian editions of the first two volumes back in the day, but they were pricey to import. My plan to buy and painstakingly read the French editions did not get far.

ANNA: Officially on my holiday wishlist!

SEAN: Lastly, we have a lucky 13th omnibus of Until Death Do Us Part, which is also the final volume.

Full of turkey? Or full of manga?