SEAN: Glory be! A small week at last! Write this week down in your diary, folks.

MICHELLE: “Glory be” is gonna make me have “The Night Chicago Died” in my head all day! :)

SEAN: We start off with Kodansha’s 14th volume of The Seven Deadly Sins, which is at least seven too many sins. Are they just repeating sins now?

For those going to TCAF, you may be aware that Rokudenashiko will be appearing and discussing her genitalia-related art. A manga-style memoir discussing the whole thing, called What is Obscenity?: The Story of a Good For Nothing Artist and her Pussy, will be out next week from Koyama Press. 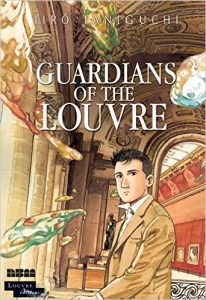 SEAN: And Jiro Taniguchi fans will be delighted to hear about the hardcover Guardians of the Louvre coming out from NBM Publishing.

ASH: Looking forward to reading this! I enjoy Taniguchi’s work, and it’s a part of the series that brought us Hirohiko Araki’s Rohan at the Louvre as well.

MICHELLE: Ooh, I had no idea about this.

SEAN: SubLime has a 5th volume of Love Stage!!.

Vertical has somehow reached double digits with What Did You Eat Yesterday’s 10th volume. That’s a lot of food.

ASH: And a delectable series.

MICHELLE: Yay! I treasure each new release of this series.

MELINDA: I’m so excited! I always want more of this series.

SEAN: Ranma 1/2 has a 14th omnibus, as we get to see Hinako fall for Soun Tendo, every Ryouga/Ukyou fan’s favorite story (they won’t enjoy the manga version), and Ryu Kumon, possibly the most sympathetic antagonist in all of Ranma.

And Requiem of the Rose King has a 4th volume, as I begin to wonder how closely we’ll be sticking to Shakespeare’s timeline. Is Henry VI not long for this world?

ASH: I still adore this series. The atmosphere! The drama!

MICHELLE: I’m enjoying this one, too.

MELINDA: I’m head-over-heels for this series! Figures, the first small week in ages, and it’s the one with the most for me!

ANNA: I agree, this is one of my current favorites!

SEAN: Are you going for the arty manga, or the more traditional fare? Or both?

ASH: I’ll apparently be picking up a copy of almost everything being released this week…