SEAN: ‘Tis Spring, and a young man or woman’s thoughts naturally turn to manga. What pleasures await us next week?

Unlike Strike Witches (look, panties!), Arpeggio of Blue Steel is an honest to goodness spy thriller that just happens to feature girls who are battleships. This is likely why I’m looking forward to the fourth volume from Seven Seas.

And for those who prefer their manga with a bit more yuri, there’s the 2nd volume of school drama Citrus.

Vertical gives us a new volume of Ajin: Demi-Human.

ASH: If you don’t mind dark and violent, Ajin is shaping up to be a great series.

SEAN: The rest is Viz. We get a 3rd Assassination Classroom, one of my favorite new Jump licenses.

ANNA: I haven’t read the second volume yet, but I’m looking forward to catching up. This series is fun and quirky. 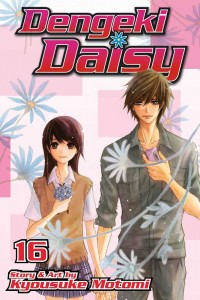 SEAN: And one of my absolute favorite Shojo Beat series comes to an end with the final volume of Dengeki Daisy. Will Kurosaki finally go bald? The most important question yet to be answered!

MICHELLE: There’s so much VIZ I am gonna be reading from this week, man. Definitely all the shoujo!

ASH: Wow, Viz really is releasing a bunch of great stuff next week! I’m due for a Dengeki Daisy marathon read.

ANNA: The main story wraps up pretty quickly, but there are a ton of side stories in this volume which I always like.

SEAN: Meanwhile, in Food Wars! 5, all our hero has to worry about is having his life ruined forever by not serving enough breakfasts.

MICHELLE: I fell a couple volumes behind on this one, and am looking forward to a Food Wars! binge.

SEAN: And there’s not only war among chefs, there’s also Library Wars, though I think its 13th volume may be a bit less serious than previous ones.

Meteor Prince also comes to an end, though with only two volumes it’s had less of a chance to addict us than Dengeki Daisy has.

ANNA: The first volume was adorable!

SEAN: If you aren’t picking up the 4th volume of My Love Story!! next week, there’s something terribly wrong with you. (Apologies to TMBG.)

MICHELLE: There certainly is.

ASH: Such an incredibly delightful series!

SEAN: One Piece 74 promises to give us more action, intrigue, silliness, drama, and possibly fresh fruit as well. 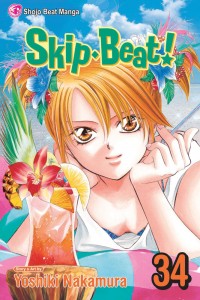 Skip Beat! 34 once again asks the question “will this be the volume where the plot progresses?”.

MICHELLE: I don’t even mind if it isn’t.

ANNA: I don’t care either!

SEAN: Toriko hits Vol. 27, will it kill off its hero in a pitched battle? Unlikely.

Voice Over! is almost, but not quite, over as it hits double digits.

MICHELLE: I continue to be surprised I enjoy Voice Over! as much as I do, but I’m really fond of it. Maybe I like best the series with exclamation points.

Finally, there’s a 2nd Yukarism, a series that interested me more than I expected last time. Will Volume 2 keep it up?

MELINDA: I’m actually really interested in this. I think I liked this more than most critics, and I’m pretty happy to see more of it.

ANNA: The second volume delves more into the past live of the main character, and deals with some of the ramifications of reincarnation in the present. I’m enjoying it too.