SEAN: I think Yen Press has set a record for most volumes released in a single week. (At least for that publisher… I suspect Viz has it beat overall there.) Let’s start with what isn’t Yen, though.

Blade of the Immortal is perilously close to finishing, and it also hits its 30th volume this week from Dark Horse. Wasn’t it the last series still published in 32-page floppies to give in and go volume-only?

ASH: I’m not certain, but I think that’s true. Either way, I’m very happy that Dark Horse continued to release the series. Nearly two decades later, this is the penultimate volume in English!

ANNA: That’s pretty epic! I loved the artwork in the first few volumes of this series, but I didn’t really stick with it for the long haul. No question that this is a big achievement.

SEAN: Attack on Titan: No Regrets has its 2nd and final volume, in which Levi’s two childhood friends survive and go set up a nice house somewhere, no doubt. Wait, no, this is Attack on Titan.

ASH: I rather enjoyed the first volume of this spinoff, so I’ll be picking up the second volume, too.

SEAN: I’ve gotten too far behind on Fairy Tail to make jokes about its plot, so hey! Fairy Tail 43!

There’s a double dose of Alice this week, from two different publishers. Seven Seas gives us the 6th volume of my favorite spinoff of the series, Alice in the Country of Joker: Circus and Liar’s Game.

Vertical has The Garden of Words, one of the more optimistic works by Makoto Shinkai. That’s not saying much, of course. I reviewed it here.

MELINDA: As a Shinkai fan, I’m a pretty interested in this. I’ve enjoyed manga adaptations of his films in the past, including 5 Centimeters Per Second. So, yeah. I’m on board.

ASH: Me, too! (Though, I’ll admit I haven’t actually gotten around to watching the anime, yet…) 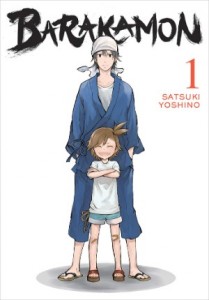 SEAN: In case you missed the digital release of Another, the horror novel Yen put out last year, we now have an omnibus print edition under the Yen On label.

MELINDA: This looks interesting to me as well!

SEAN: Alice in the Country of Diamonds ~Wonderful Wonder World~ is part artbook, part guide to the PSP game, and part fan thing, with interviews, manga, etc. If you like Alice, it’s all here.

Barakamon is an anticipated new series from Yen, about a calligrapher who is sent to a remote island after losing his temper; the plot is basically “fish out of water”, but it’s apparently quite well done.

MELINDA: Again, I’m interested. This actually is turning out to be a pretty intriguing week!

MICHELLE: I was just reading the description for this on Yen’s site the other day. It definitely looks appealing!

ASH: This is one of the series from Yen that I’ve been most looking forward to reading.

ANNA: This does sound really intriguing.

SEAN: Black Butler hits its 18th volume, and I’ll bet you two to one that Ciel and Sebastian are investigating something-or-other.

Bloody Brat gives us a 2nd volume of wacky antics with the cast of Blood Lad, to contrast with the wacky antics already present in the main series.

MELINDA: Always up for more wacky antics in this universe.

MICHELLE: Me, too. It just suits my humor. I actually found that the main series is funnier than the spinoff, at least in the first volume, but I’ll actually be reading volume two this evening for… reasons. 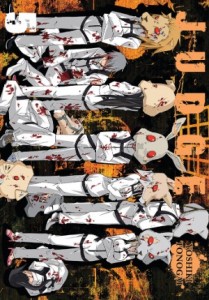 SEAN: A Bride’s Story is now an annual release, but that’s more ‘caught up with Japan’ than anything else. It’s still a terrific title everyone should read.

MELINDA: It’s been a while, indeed. This can’t come too soon.

ASH: Anything by Kaoru Mori is always a must for me. (Also, Yen is bringing back Emma!)

ANNA: I need to get caught up on this series. I agree that anything by Kaoru Mori is a must have.

SEAN: Doujinshi Anthologies (non-porn) are a staple of popular Japanese franchises, but we rarely see them over here. Yen has made a few exceptions, and after seeing The Misfortune of Kyon and Koizumi a while back, we now have The Celebration of Haruhi Suzumiya, which binds together three similar volumes into one big omnibus.

Inu x Boku SS had quite a plot twist last time, one that leaves the series seemingly with no one left to carry on. Where it goes from here will be the big reason to read this 5th volume.

Given the author drew the Time-Killing Arc, one of my favorite Higurashi arcs, I wish I liked Judge better than I do. Survival Game is just not my favorite genre. Here’s the penultimate volume.

Kingdom Hearts 358/2 Days has its fourth volume, and yeah, I got nothing.

I’ve said it before and I’ll say it again – the gag manga The Melancholy of Suzumiya Haruhi-chan, whose 8th volume ships this week, is a better adaptation of the source than the main manga. Not more accurate. But better.

No Matter How I Look At It, It’s You Guys’ Fault I’m Not Popular! has its 5th volume ship, and the only thing that makes me more uncomfortable than reading it is having to type out its full title. Still good, just cringe inducing.

ASH: Yeah, it can be a bit hard to read, but it is a good series. 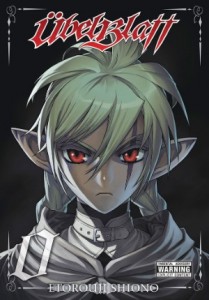 SEAN: Hey, remember Oninagi? Had 3 volumes out about 5 years ago from Yen? Not very good? Ever wonder where that final fourth volume ever got to? Well, wonder no more. Here ‘tis.

ASH: Oh, wow, I’m not familiar with this series at all! It’s still great to see it being completed in English, though.

ANNA: I’m going to sit in the corner and whimper for all the unfinished series I’d like to see completed in English.

SEAN: Another Madoka Magica tie-in also wraps up, this being A Different Story.

I was surprised to see the dark fantasy series Ubel Blatt licensed, but unsurprised to hear it will be coming out in omnibus form, given its length. This first one collects Vol. 0 (a special prologue) and 1, but is labeled 0 to confuse everyone.

MELINDA: I’m cautiously interested. “Dark fantasy” can go either way for me.

MICHELLE: Same here. I must say, too, I’m kind of relieved that series I don’t follow about are wrapping up; I always feel guilty when I’ve nothing to say about them.

SEAN: Lastly (at long last), there the 2nd omnibus of Umineko When They Cry: Alliance of the Golden Witch. We’re getting closer than ever to defining what magic is, which in turn will help us to understand Beatrice. And by we, I mean the reader. Not Battler, he’s still useless.

Despite all these titles, is there nothing here that can satisfy you? And if so, why? Look at them all.