It wasn’t on Amazon 2 weeks ago, but now I see there is a release for Volume 9 of Ze. A series whose release dates are almost as convoluted as its content.

ASH: I was wondering what was going on with Ze‘s releases. 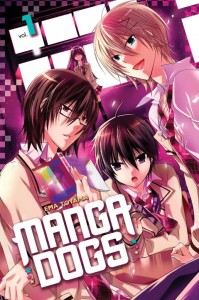 SEAN: Sadly, Kodansha did not stick with the original title for this series, GDGD-DOGS. But Manga Dogs works just as well, and for fans of Missions of Love it’s by the same author, and has another reverse harem.

MICHELLE: Huh. While Missions of Love was not for me, I kind of liked Toyama’s I Am Here!. Still, I dunno… the temptation is pretty faint.

ANNA: I like reverse harem as much as the next gal, but this isn’t really on my radar.

SEAN: And there’s also the 9th volume of Missions of Love as well, featuring the most likeable, well-adjusted cast in all of shoujo.

SEAN: And the 5th volume of Vinland Saga, which is unlikely to get a shoujo spinoff in Aria anytime soon, unless Ylva ends up going to high school in Japan or somesuch.

ASH: I… would actually read that. (And I’m definitely reading Vinland Saga!)

ANNA: I would also read that! Vinland Saga is so well-executed, each new volume is a treat.

SEAN: Seven Seas has the first volume of Magical Girl Apocalypse, which seems to be for folks who thought Madoka Magica to be too light-hearted and cheerful. But hey, Akita Shoten license! A rarity these days.

Vertical has an 11th volume of Knights of Sidonia, which I hope will have more cute romance and action sci-fi (and perhaps a bit less tragic horror?).

ASH: One can never tell with Knights of Sidonia.

MICHELLE: I absolutely must get caught back up on this series. Looks like we’ll be caught up to Japan fairly soon, too.

ANNA: I need to get caught up too! I am so pleased that we have so many manga titles set in SPACE!

SEAN: The rest is Viz. If you didn’t pick up the 2nd Food Wars! When it came out digitally, it’s now available in print. I’m hoping for slightly less naked food reactions, but I know there will be some.

ASH: I still prefer my manga in print, so I’ve been waiting to pick up the second volume until now.

ANNA: I thought that there were glimmerings of an interesting title here, but I have to admit when I read the first volume I was put off by all the upskirt panels and naked food reactions.

SEAN: Happy Marriage?! continues to be a very ironic title as we hit Vol. 8.

MICHELLE: This series has grown on me, so I’ll definitely be checking out volume eight.

ANNA: I think it has gotten a bit meandering as the series go along, but I’ll still read every volume shortly after it comes out. 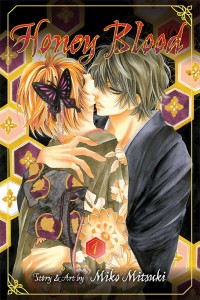 SEAN: Then there’s Honey Blood, which (say it with me, folks) has vampires in it! The cover art makes me go >_> a bit, but I’m hoping that the relationship in this series is not as unequal as it first seems.

ANNA: Did someone say supernatural shoujo!? I hope this is more like Midnight Secretary than Black Bird. Will be checking it out for sure.

SEAN: Heartwarming supernatural shoujo #1: Kamisama Kiss, which has gotten up to Vol. 16, and shows no sign of ending anytime soon.

MICHELLE: Yay! I like it, but I think I still prefer the author’s Karakuri Odette.

ANNA: I actually like it more than Karakuri Odette! This series is consistently charming.

SEAN: I was a huge fan of the first My Love Story!!, despite the multiple exclamation marks, and look forward to seeing where it goes from here.

ASH: I absolutely loved the first volume of My Love Story!! So much so, here are a few extra !!! for good measure.

MICHELLE: My Love Story!! is a glorious thing. Volume two has been in my Amazon cart for a few weeks now.

MELINDA: Definitely looking forward to this… so sweet.

SEAN: Naruto seems to be finally grinding to a slow halt, but that still leaves several volumes to go. And several more times for Sasuke to turn evil.

Heartwarming supernatural shoujo #2: Natsume’s Book of Friends, which has gotten up to Vol. 17, and shows no sign of ending anytime soon.

MICHELLE: Yay! I suppose this means I am a sucker for heartwarming supernatural shoujo.

SEAN: Nura: Rise of the Yokai Clan has started its final arc, but that’s going to be a few volumes as well. Here’s the 23rd.

If you missed One Piece the first time around, the 3-in-1 is the perfect catchup, and it’s at Vol. 10.

Oresama Teacher is not supernatural, and I wouldn’t call it consistently heartwarming, but if you want funny shoujo, this is the manga for you, and I adore it. Here’s Vol. 17.

MICHELLE: Maybe it’s the lack of heartwarmitude that makes me only like this one. I catch up on it periodically, but I don’t love it.

ANNA: I do love it, just because it is so ridiculous. This is the only long-running comedy title that has consistently captured my interest. 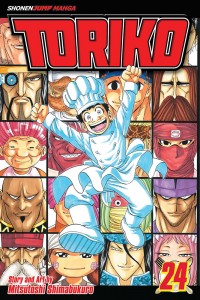 SEAN: The new arc in Toriko will apparently focus on Komatsu rather than Toriko, as it’s a cooking battle. Should be fun.

Voice Over: Seiyu Academy is over halfway done, and I’m hoping we see a bit more fleshing out of the male lead soon beyond “CATS”.

MICHELLE: *snerk* I do like the cat bits, though. And, surprisingly, I’m rather enjoying Voice Over.

SEAN: Lastly, we get the debut of a new Jump title as well as its 2nd volume, as Viz pushes a fast start to World Trigger. It’s at 8+ volumes in Japan, so has broken the “early Jump cancellation” curse. Should be interesting.

ASH: I’ve recently heard some good things about World Trigger. And two volumes at once? I may have to check it out.

MICHELLE: Whereas I have heard precisely zero things about it! I’ll wait for Ash’s review to decide.

ANNA: I know nothing about this but I will be reading it!

MELINDA: I’ll be checking this out for sure.

SEAN: Are you exhausted yet? What manga here makes you want to take it home?