SEAN: There are sixty-five different manga titles coming out in October. The mind reels. Luckily, this October 1st is really September 30th in book publishing terms, so the four titles featured here do not add to that total (which is good, as it would then be sixty-nine, and I’d feel obliged to make a tasteless joke) and also allow the reader to have a brief respite. 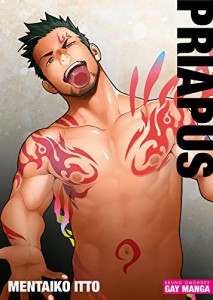 For those of you who are looking for gay manga written by an actual gay man, Priapus is likely the title for you. The premise is somewhat comedic – Zeus sends an emissary to turn all the men of the world gay so that the population dies off, as he is tired of violence and hatred. Thus we have a lot of straight men suddenly questioning their sexuality. The cover certainly makes it look like a lot of fun.

MELINDA: I’m definitely interested in this. In fact, it may be the only thing this week I really have my eye on.

MICHELLE: Hm, I’d been unaware of this one before now. Could be fun!

SEAN: Fairy Tail has its 42nd volume, which no doubt will have the answer to the ultimate question of life, the universe, and everything.

My Little Monster hits Volume 4. Can our screwed up cast figure out how to balance love, school, future careers, and not irritating the heck out of each other? We’ll likely not find that out here, but it should be fun anyway.

ASH: I’ve been rather enjoying My Little Monster.

SEAN: Lastly, we have the 7th volume of the amazing Vertical release, Mobile Suit Gundam: The Origin. This one apparently features the Battle of Loum, and it’s a must read, assuming you aren’t horribly behind on it as I am. In which case, buy it anyway and save it for a rainy day.

ASH: The Origin is still one of the manga with the best presentation and design in English right now. The contents are pretty good, too.

ANNA: I have a few volumes stacked up of this, but this is one of those titles that I faithfully buy even if I am behind. Such a lovely edition!

Are you taking a break? Or buying something?