SEAN: School is back in session, and we have some manga to help keep you occupied and away from your homework.

First off, apologies to Viz for leaving off one of their titles last week – Dawn of the Arcana 13, the final volume, should have been there. I know it’s quite popular with the MB writers, or at least is always on the ‘I should catch up with that’ list.

MICHELLE: Indeed, it is quite good!

ANNA: This is one series I read as it was coming out, and I enjoyed it a bunch. 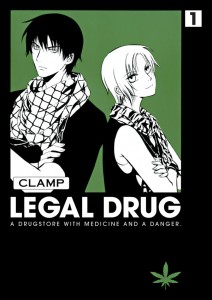 SEAN: Dark Horse is putting out another CLAMP omnibus, this one containing Legal Drug, which deals with two young men at a drugstore who get involved in the supernatural. This should have all the initial manga – Dark Horse has also licensed the sequel, starting in 2015.

ASH: I think I still have my old Tokyopop volumes of Legal Drug kicking around somewhere, but I’m definitely interested in the sequel series.

MICHELLE: Me too, on both counts! The sequel, Drug & Drop, is also seinen, which is an intriguing demographic change.

ANNA: I’m really interested in the sequel series. Now if only X/1999 had an actual ending….

MELINDA: I am pretty excited about this. It’s got a new translation, so that’s something alluring for those of us who still have our old Tokyopop editions, but yeah… the real draw is the series’ continuation, which I’ve been longing to see for myself.

SEAN: DMP brings you Wolf Magic, which I don’t think has much to do with wolves, but…

ASH: …but there is a florist!

SEAN: Kodansha has the 19th volume of Battle Angel Alita. Has it escaped the tournament yet?

ASH: I’m really not sure that it has.

SEAN: There’s also the 4th Seven Deadly Sins manga, which is starting to really flesh out its cast of Sins, though I wish it would give Elizabeth a bit more to do.

The final Sherlock Bones manga is out, meaning there are no Holmes pastiches coming out in the manga world at all. This must be remedied soon.

SEAN: From SubLime comes another volume of His Favorite, which I still haven’t read but whose covers make it look like it’s a ton of fun. More BL comedy mangas are needed.

MELINDA: I kind of fell away from this series, but the covers do always make me want to jump back in! 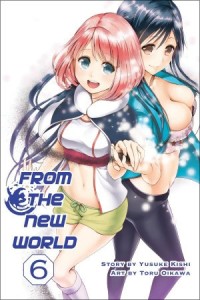 SEAN: The penultimate volume of From the New World ships from Vertical. Surely it’s an old world by now. It’s been 6 volumes.

07-GHOST has a dozen volumes now, meaning my chances of catching up now are slimmer than ever. Anna has kept up though, right?

MICHELLE: I keep saying “one day,” but I really mean it.

ANNA: You know what? I just bought Volume 5, which was the one gap in my stack of 07-Ghost Volumes. I am saying it now, SEPTEMBER WILL BE THE MONTH I CATCH UP ON THIS SERIES!!!!!! Look for frequent and often 07-Ghost updates from me!!!!! 07-GHOST ALL THE TIME!

MICHELLE: READ ALL THE 07-GHOSTS!

SEAN: And Arata the Legend is up to Vol. 19! Sorry, Fushigi what?

MICHELLE: Arata is pretty fun, but won’t take the place of either Fushigi in my heart.

ANNA: I do love me some Fushigi.

SEAN: Lastly, I will have a LOT to say about it in my inevitable review, but suffice it to say if you get ANY two volumes of Hayate the Combat Butler, get Vol. 24, out next week, and the one before it. The series’ high point.

What manga are you tuning your hickory sticks to?