SEAN: As usual with a fifth week, it’s small, but not as small as you’d think!

Another DMP blast from the past, as we get the 2nd volume of Otodama: Voice From The Dead, the first having come out in 2010. Does anyone remember what it was like?

ASH: Wow, that is from a ways back!

MICHELLE: I thought I had read and reviewed this one, but evidently not! 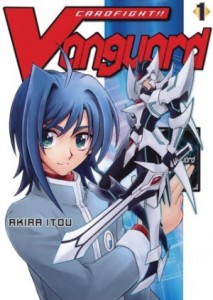 SEAN: There’s also Vertical, with its debut of a new series that surprised me when they announced it. Cardfight Vangaurd is a card fighting game, along the same lines of Yu-Gi-Oh!, and has a large cult following. Its manga ran in KeroKero Ace magazine.

Everything else this week is Kodansha. We see the 12th Attack on Titan manga, and I greatly enjoyed it. Which may be the last time for a while, as having read the chapters on Crunchyroll, the series is getting into some very problematic areas for me.

ASH: I’ve been waiting for the print releases, so I’m interested to see where things head with this volume.

SEAN: Sankarea rolls on, and no one is permanently dead yet, nor has anyone consummated their harem relationship. Still, it’s a lot of fun and has some exciting sequences.

They also debut the 2nd series from Dessert magazine in 2 months, this one called Say “I Love You” (Kodansha left off the quote marks from the Japanese version, which I think is a shame). It has an anime I expect a lot of folks have already seen.

MICHELLE: I haven’t! But I’ll definitely be checking this one out.

ASH: Vinland Saga has become one of my favorite series currently being released. What are you waiting for?

ANNA: Vinland Saga is wonderful. I agree with Ash, I’m surprised you aren’t reading it!

SEAN: Lastly, xxxHOLIC begins its sequel… or is it a reboot? What on Earth is going on here anyway? In any case, it has the Sean seal of approval, i.e. it does not mention Syaoran once.

MICHELLE: I must admit that I never actually finished the original xxxHOliC! But the omnibus releases will make it easy for me to finally get the final volumes I missed picking up. But, nevertheless, it’ll be a while before I read the sequel/reboot thing.