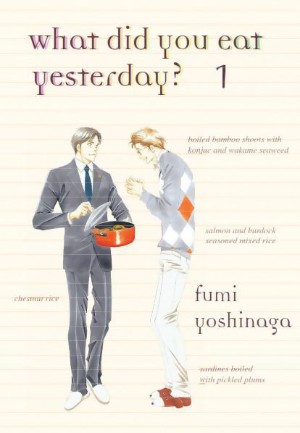 SEAN: There’s a lot of great things coming out this week – some of which I even forgot to put in my weekly post! (Sorry, Wolf Children, I’ll get to you next week.) That said, there’s only one title that’s *the* Pick of the Week, and that’s Vertical’s debut of long-awaited seinen manga What Did You Eat Yesterday?, from Fumi Yoshinaga. The story of a couple and their daily lives and meals, it’s a story with two gay men that isn’t “Boys’ Love” as we know it. Can’t wait to read this one.

MICHELLE: I think I’ve been pestering publishers to license this one for about seven years, so yes. Pick of the Week. Possibly Pick of the Decade.

ANNA: No argument from me, I’m also very much looking forward to this manga!

ASH: No arguments here, either. I’m very excited for the release of What Did You Eat Yesterday? and have been looking forward to it ever since the license was announced by Vertical. Actually, like Michelle, this is a series that I’ve been clamoring for for years. I’m thrilled that we’re finally getting it in English!

MELINDA: I honestly can’t think of a title I’ve wished for more than this one—and it’s obviously not just me! This title has inspired heartfelt pleas from both Manga Bookshelf columnist Travis Anderson and the Battle Robot’s much-missed left leg, David Welsh. I’ve waxed eloquent many times over Fumi Yoshinaga’s particular talents with slice-of-life dialogue, food, and gay characters, and given that this manga includes all three, my only occasional worry has been that I’ve built it up too much in my own head for even Yoshinaga to live up to. I can’t wait to find out. Thank you, Vertical, for bringing us this manga!