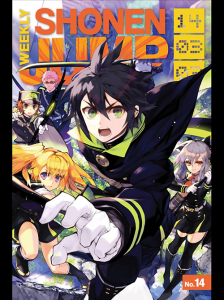 It’s so easy to be pessimistic about manga. Except for this week, even working to my full ability I couldn’t find any reason to be overly enraged at any of the chapters, so I’m afraid you’d just be wasting your time reading this. Well, except for…

Seraph of the End Ch. 012
This only applies to me most likely, but starting off the week with Seraph of the End is a sure fire way to make sure I put off reading the new chapters until I run out of other things I’d rather be doing. I suppose I could always skip the first chapter, and go on to more interesting series, but that would just mean I never come back to read this one. My habitual bitterness aside, this week was actually pretty decent. Granted, any time Shinoa opened her mouth was excruciating, even when she was sharing plot important information, but especially when she was forcing what passes for humor in this series on us. The action, however, was quite well done, with the opening pages of Yuichiro killing a vampire giving me hope for the rest of the chapter. And the final two page spread gives me hope for the rest of the series. Not much hope, given the general writing style, but I’m curious if Writer Kagami will fully commit to what this could mean to the series, or if the outcome will be a half-hearted at a dramatic cliffhanger easily resolved next chapter. 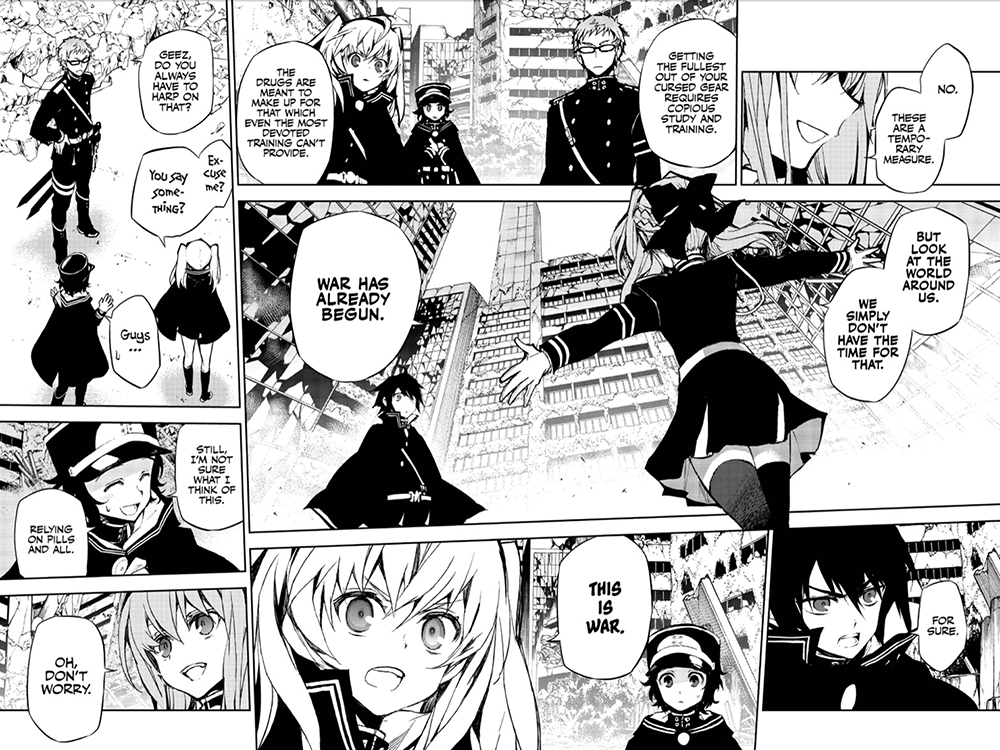 Stealth Symphony Ch. 002
This is where things started picking up this week. While chapter two, after the introductory chapter last week, was spent wrapping up the rest of the set up it certainly convinced me that we’ve got something good on our hands here. The story is passable, if nothing spectacular, but what really sells me is the art design. Troma’s design, of what we can see, is traditional western, but after so many attempts at artists trying to be more original with their dragon designs it feels comforting to go back to a more standard fantasy design. And what other manga can boast a character who looks like a goblin straight out of World of Warcraft? The first chapter may not have been anything special, and downright predictable in places, but in an age where design aesthetic is moving away from traditional designs it’s almost unique to see someone willing to go back to what has been a standard in fantasy art for decades. I can’t promise for where the story will go after this, but I can certainly recommend this series to anyone based just on the refreshingly familiar approach it takes to fantasy.

Nisekoi Ch. 112
Marika is both the worst and best character in this series. In part she is everything that characters I would normally hate are. But mostly because she is so obvious about how conniving she is I can’t help but love her. Even Raku isn’t fooled, he knows exactly what she is doing, but fortunately for him she is so easily satisfied that even when she tricks Raku into doing her will she can’t go too far because a simple pat on the head is good enough for her. And it is thus that she is so lovable. I have to commend Raku for his smooth move with the ring though, that is a legitimately romantic move that it even leaves the “mastermind” behind the whole scene speechless for a moment.

Add in a perfect fourth wall breaking opening (perfect in that I had indeed forgotten entirely about Migisuke), and an ending that is both the most awkward and ridiculous thing you’ll read this week.

One Piece Ch. 739
Well, Trebol’s overreaction was received about as well as was expected, but sadly it did not knock Sugar out as I had hoped. Sure that would have been an easy resolution to a major plot point, but it would have been worth the joke. We get a minor flashback for Rebecca, it seems that Oda is definitely playing around with shorter, more frequent flashbacks this arc. Which I think would be an excellent change to his storytelling style. While flashbacks tend to be one of the highlights of each arc, they do drag the reader out of the story, making it hard to get into the flashback and then back into the actual story. Several smaller flashbacks would definitely smooth the flow of each arc over much better, giving us the same information but spreading it out. It works much better on a narrative level because the big reveals in each flashback would then be able to correspond to the big reveals during the current timeline.

It’s a shame though that Rebecca’s effectiveness as a fighter seems to have come to an end. Of course it makes sense that she couldn’t stand up to one of the high ranking villains, but nonetheless it’s a disappointment to see her pushed to the side, when Oda was once one of the few manga artists that actually let his female characters have fights as important as those of the men in the story.

And of course we have a big reveal at the end, which was somewhat obvious, but the question is whether it is meant to be obvious or whether Oda legitimately thought no one would figure it out. Given his decade plus track record I’m going to give him the benefit of the doubt, but I will say that the twists this arc have been very easy to call. Or at least those that had any kind of buildup earlier in the arc. The one involving “Lucy” was impossible to call seeing how we had nothing to suggest that’s where Oda was heading.

All You Need Is Kill Ch. 007
Now we get some real action, we’ve finally gotten past the buildup, though more will surely follow, and now it’s time to enjoy our newly baked badass action hero. I had been a bit confused as to why Keiji turned Rachel down last chapter, but this time around it makes sense as he’s not interested in one-night stands, which is all he could have since she would not remember anything when he looped again. Which officially makes him a better person than Bill Murray in Groundhog Day. And of course the twist at the end of this chapter suggests that maybe Keiji’s lonely journey won’t be quite so lonely anymore. And again, this twist was somewhat easy to call, but nonetheless opens the story up for some interesting direction. 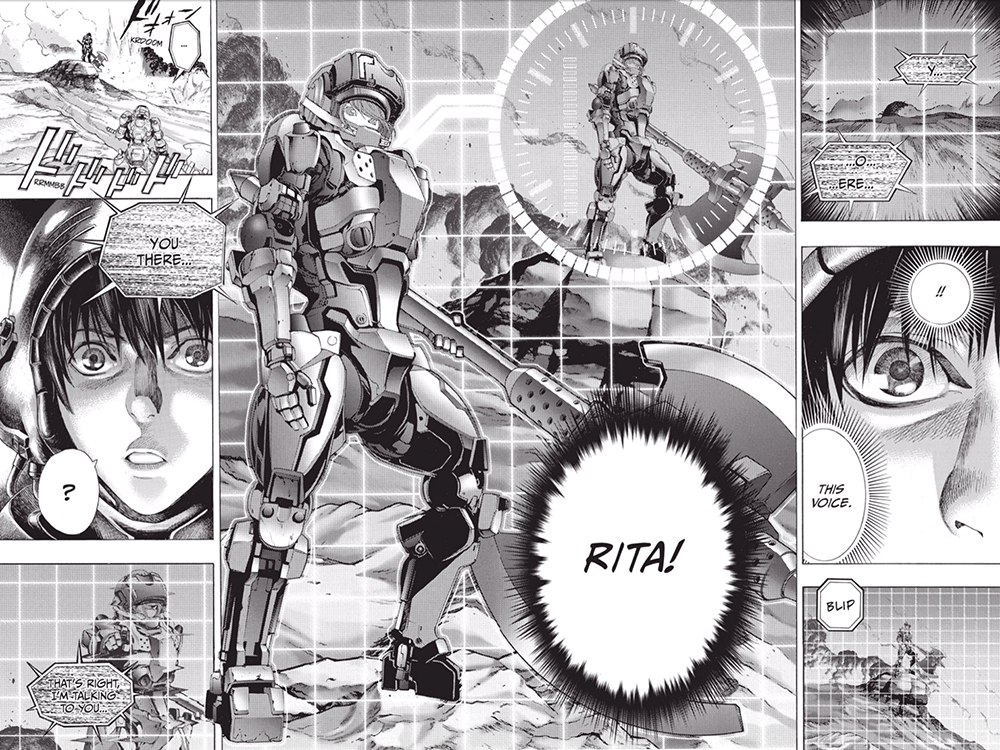 Toriko Ch. 268
Even the worst tasting food will be a feast to anyone that is hungry enough, and the denizens of Toriko’s world have hungered for real food long enough that even the apparently foul tasting Billion Bird becomes the greatest food. Though it seems that maybe the bird doesn’t actually taste that bad, and its entire body can be used to make meals that are more than just the meat. And while this is clearly a message heavy chapter, I for one can definitely appreciate the message that sometimes all someone needs is a bit of praise.

It’s nice to see that Shimabukuro isn’t planning to ignore the fact that Rin proposed to Toriko and he accepted. I thought that would have been ignored for a while, so it’s a nice change of pace that it isn’t being ignored. Though I’ll never understand why anyone would eat raw or barely cooked egg; nor do I understand why I suddenly hunger for a soft boiled egg. 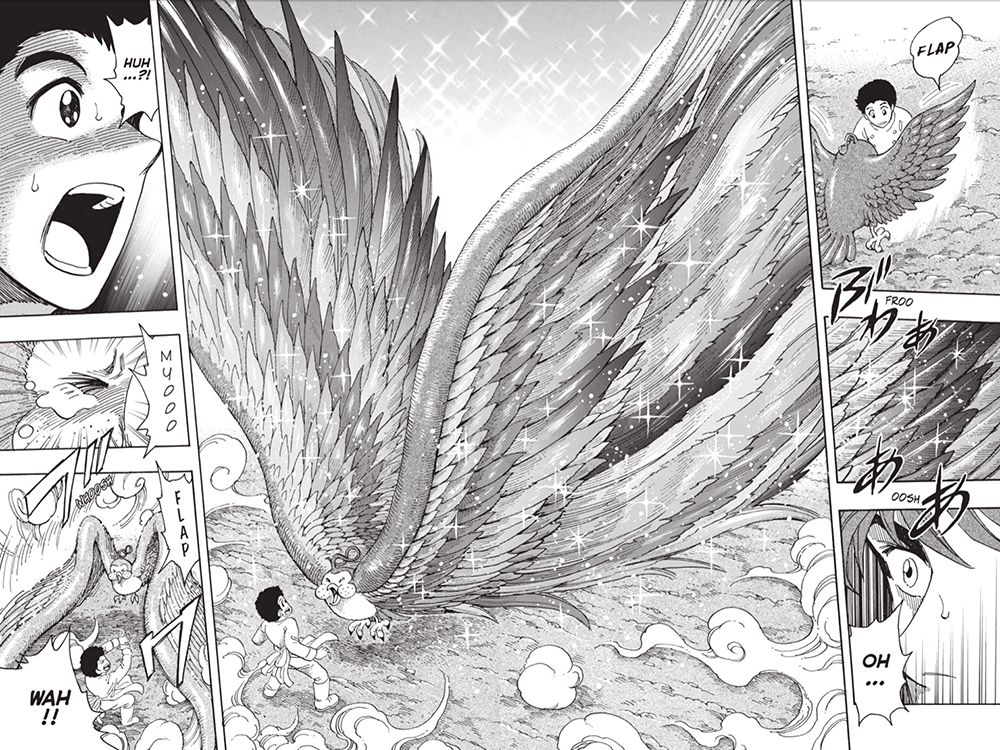 Bleach Ch. 570
Rukia’s bankai certainly looks spiffy, it’s a shame we have absolutely no idea what it actually does. And while I do get somewhat annoyed when the series focuses on the Soul Reapers too much, at least my annoyance is somewhat lessened when it focuses on the more ignored Soul Reapers like Isane and Yachiru. I think this might be the first time that Isane actually gets any kind of major focus. If she’s to have a fight I’m certainly looking forward to seeing what she can do. Though I get the idea that perhaps this is meant to be Yachiru’s time to shine? 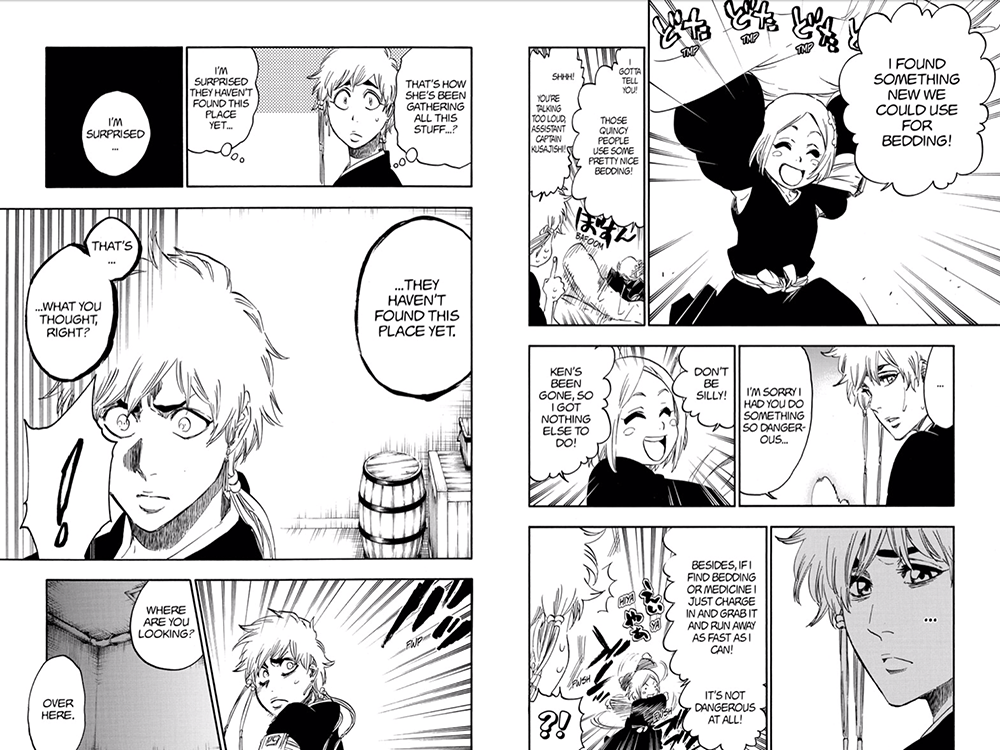 World Trigger Ch. 050
Osamu’s fight is perfectly executed. The parallels between him and Yuma make the pay off of his victory all the sweeter. What else can I say? The flashback was a bit time consuming, but not in a distracting way, and the cliffhanger has me tearing my hair out in frustration. I can’t believe that this manga, that I actually used to pretty much hate, can actually be good enough to make me hate it for the cliffhangers now. We’ve definitely come a long way, and I’m pleased that the awkward teenage years of this series have been put behind us.

There’s no such thing as a perfect week for manga. But this one got pretty close. Definitely a great way to start the week off right.