If you don’t have a Weekly Shonen Jump membership you really should consider buying one. The past couple weeks have been quite excellent, almost all the manga published in the magazine have had a pretty excellent run the past couple months. Even the series I complain about on a regular basis have been doing pretty well.

A good week of manga is a lot of good chapters. Or just a lot of chapters. But it’s a double edged sword. Because the more there is for me to read and enjoy, the more work I have to do when writing it all up. It’s a good thing I love sharing my opinion so much on the internet. So let’s do this.

Blue Exorcist Ch. 054
This series has been a bit lackluster the past several chapters. This month is a return to form as we get the pay off for some foreshadowing we didn’t even realize was being implemented. We also go back to a focus on action instead of in between chapters and backstory. Keep in mind, in between chapters are necessary, but in a monthly series more than just a single in between chapter drags on for a dangerously long time. Finally getting some action after a long while really helped me be more interested in this chapter. And the way the story is portrayed really works in that we have two separate stories being interwoven quite well, as we switch from Kamiki to the rest of the group. Definitely a recommended read for this issue. 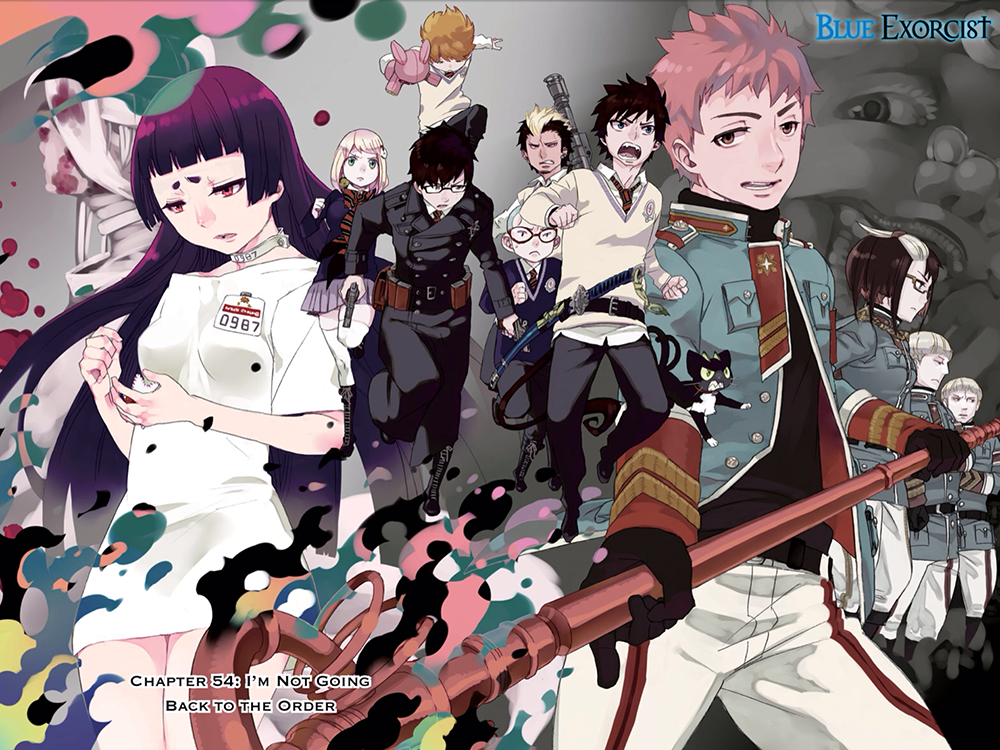 Nisekoi Ch. 109
Last week I raised some concerns about how Komi would handle Haru as a character. I worried that she would go the stereotypical route of being just another member of the harem. Fortunately this week mostly dispelled those fears. There are of course major hints that she will become a member of the harem, but for the moment she is going to be a much more interesting character than I initially feared. I find the idea of a character who clearly accepts how they feel about someone, but are willing to step aside for someone else quite interesting. I’m curious to see how far Naoshi Komi will be taking this idea, whether he will go all the way with having Haru refusing to act on her feelings, or if we will be treated to her confession to Raku despite her intention to support her sister. Either way, this chapter definitely salvaged what I feared was a lost cause of a character. 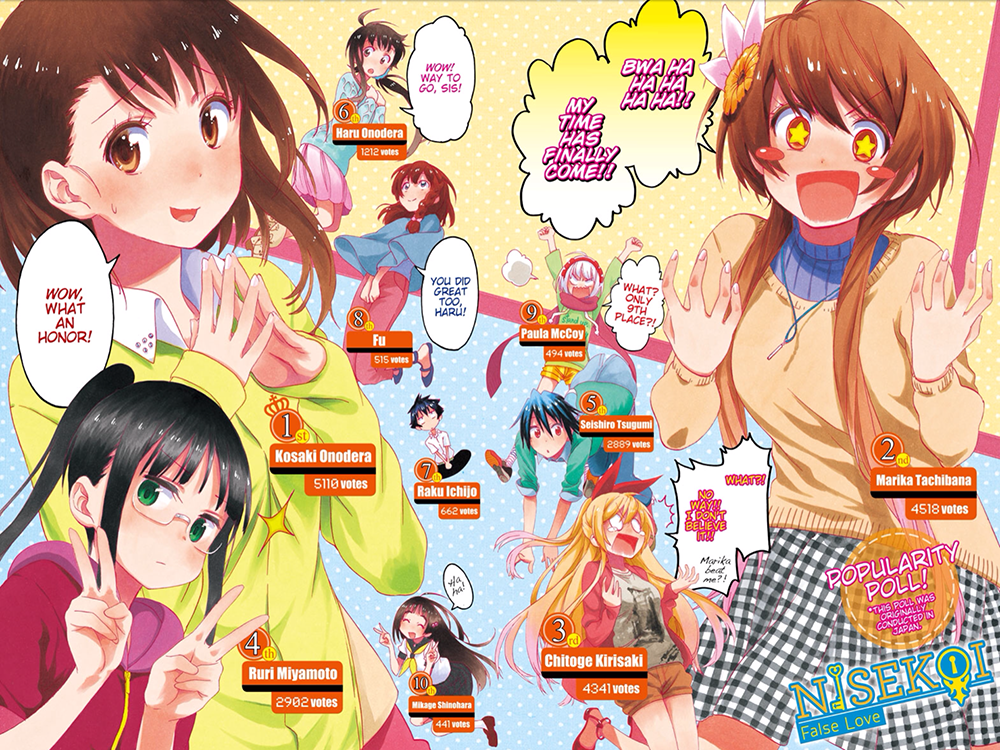 World Trigger Ch. 048
This was an excellent chapter. I’ve railed against Border for being another incompetent military organization, and while I still question the ethics of using teenagers as soldiers, I loved seeing the commanders competently handle the battle. And not just the ones we figured would be competent, but even characters built up as buffoons are showing their intelligence. We get a pretty badass scene where Tachikawa cuts a bomber in half, which was easily my favourite part of the chapter. And seeing Kitora act outside her originally established character was an excellent moment, one that I’m sure the shippers probably are enjoying. With each trope a character follows, the best way to gain points with me is to have them act outside that trope. It does wonders for making characters feel more real, and Kitora certainly is doing that for me in this series. 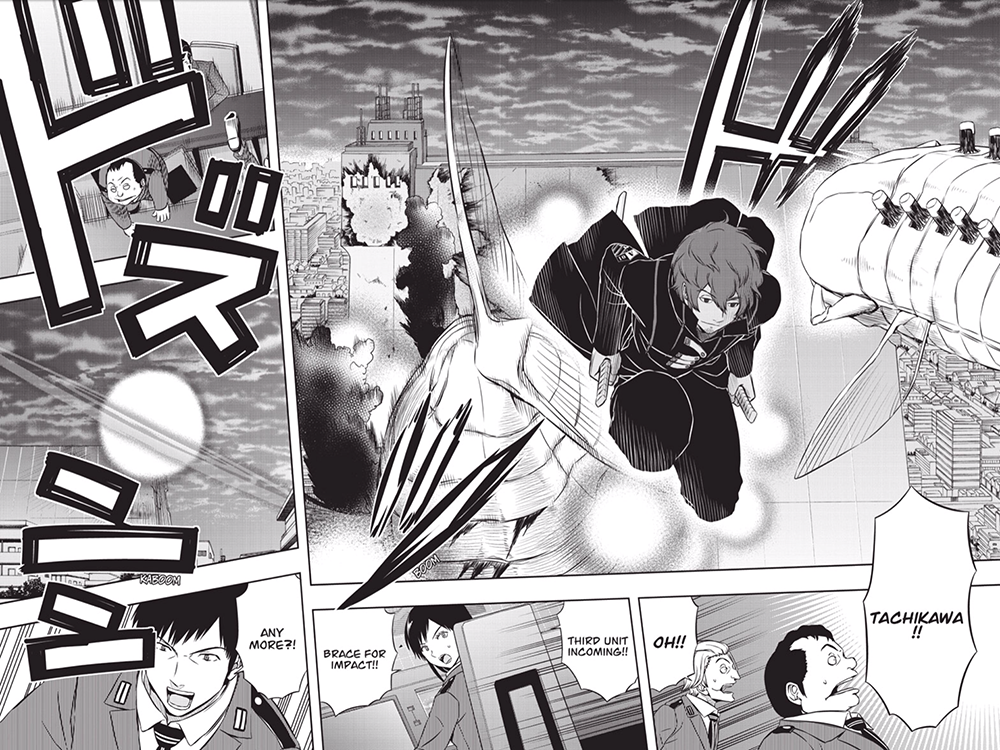 Toriko Ch. 265
This was much better than last week. While I enjoyed last week’s chapter I found that it was a lot harder to get over Komatsu’s rescue being skipped. This week I’ve accepted that jarring shift and was able to enjoy the chapter for what it was. And while a little emotionally manipulative I loved how the chapter sets up the food shortage as a very real problem, the world has clearly had to evolve around this situation, rather than just being a one chapter problem and yet somehow we get the emotional payoff of seeing Toriko deliver the food he brought. And all that in just a single chapter. I love Mansom’s new design, though he does look quite a bit like Ichiryu. And is it just me or does it look like Komatsu may have just found his long lost son?

Naruto Ch. 663
So we get confirmation that Gaara is going to try and fuse Minato’s ninetails chakra with Naruto, so that’s nice. And I enjoy seeing Sakura actually be involved in the story. And actually care about her so called friend. But the sudden powerup from Karin comes out of nowhere, though I’m biased against her so I doubt she could do anything I wouldn’t hate. And Madara finally takes on the form of the sage of six paths. So at least the plot is moving forward. And for all intents and purposes Sasuke is pretty dead. So overall this was a good chapter for me. Though I have to wonder as to the effectiveness of cutting a dying person’s side open and massaging their heart directly. That’s not an actual thing that’s ever been done is it? 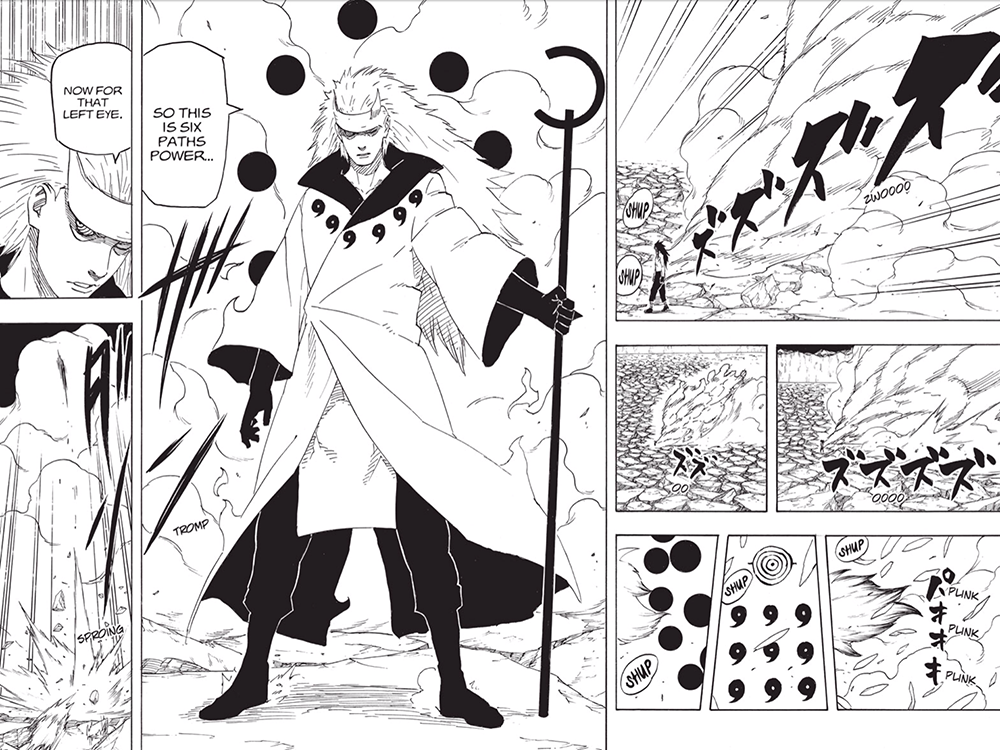 One-Punch Man Ch. 32
This is definitely a chapter where if you haven’t shifted your paradigm from comedy to action you probably won’t enjoy. Personally I’ve finally made the switch again so I was able to enjoy the excellent art and fighting scenes. I like the idea of an enemy that can regenerate no matter what, which I think is honestly the only way to pose any kind of threat to Saitama. So I look forward to this monster fighting Saitama. Other than that, this was definitely a great chapter to show of the fighting prowess of the other characters. Worth a read, but unless you spend a lot of time studying the art you will get through it very fast.

Bleach Ch. 567
Has Kubo just forgotten that his characters are ghosts/spirits/gods? What’s all this talk about Rukia being dead as if it wasn’t her usual state. She is already deceased! That which is dead cannot be alive as well! She is a spirit! A soul! Are we supposed to believe that souls in this world have a different kind of life? And that’s why they can die? I guess that kind of works. This chapter would be a lot easier to swallow if it weren’t for the fact that the mythology of the afterlife in this world is completely messed up. The best I’ve been able to gather is that after humans die they become spirits. But spirits can also die/be destroyed. But their energy cannot be destroyed, because physics, and ultimately they are re-purposed as energy to create spiritual constructs and (and this is me assuming) new spirits. Hence how soul reapers can have families. But if spiritual energy can become spirits in the afterlife, what with there being families that soul reapers are born into, then at what point does spirit matter go back into the human world? Can only the soul reapers reproduce? Or can the souls of dead humans do the same? In fact, if they ultimately become spirit energy, then what’s the point of human spirits retaining their consciousness? And ultimately, what is the purpose of this system? If souls can be destroyed, as quincies have shown the ability to be able to do, and that destruction causes an imbalance, suggesting that the spirit energy is destroyed as well (which should be impossible since it is energy) then what is consciousness and what is spirit?

Ultimately, how can Rukia be any more dead than already dead!?!?!

All You Need Is Kill Ch. 004
We get a satisfying answer to how Keiji gets his battleaxe. And I guess it doesn’t need to be forged in the traditional sense so it doesn’t take as long to make. But is he really going to have to convince Shasta to make him a new axe every single time. I guess we aren’t really supposed to think about it too much. I do feel a bit disappointed that we don’t get to see any actual action, but the anticipation is good enough for me right now. The pacing has been quite strong, and I’ve found no real fault in the series to this point. The writing is strong and the art is as always excellent. Though I cannot stress enough how out of place Obata’s women are. But at least I haven’t seen anything in this series that could lead to major accusations of sexism like in Bakuman. 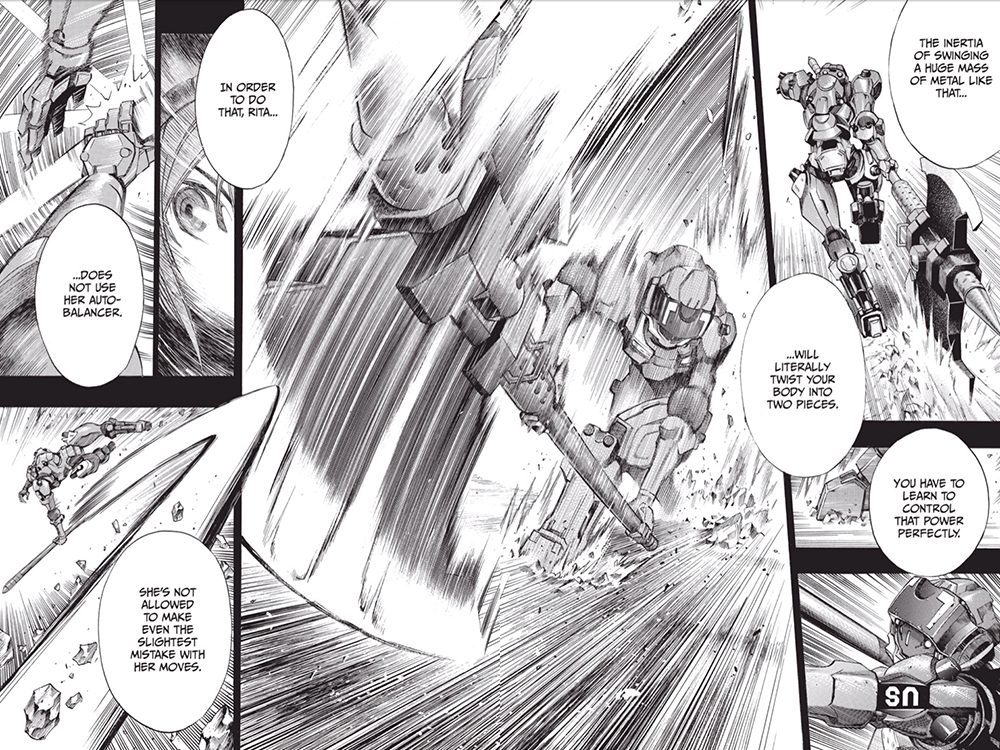 One Piece Ch. 737
So would Peka’s Stone-Stone ability qualify as a paramecia or a logia? Since he doesn’t really turn himself into stone on his own, rather he has to absorb it from somewhere, I’m guessing it’s a paramecia, even if earth/stone is considered one of the classical elements. Either way, things aren’t looking good for Luffy’s group, how can they fight someone that controls the entire building they are inside?

The answer will of course be, “Amazingly” but we’ll have to wait for that. For now it’s time to focus on the coliseum. Clearly “Lucy” is a force to be reckoned with, and what we all thought would happen occurs, people start to notice that “Lucy” fights differently from Lucy. The delayed final reveal of his identity is puzzling. We all know who he is, but Oda continues to hide him from the audience. All I can say is, what exactly is he planning? 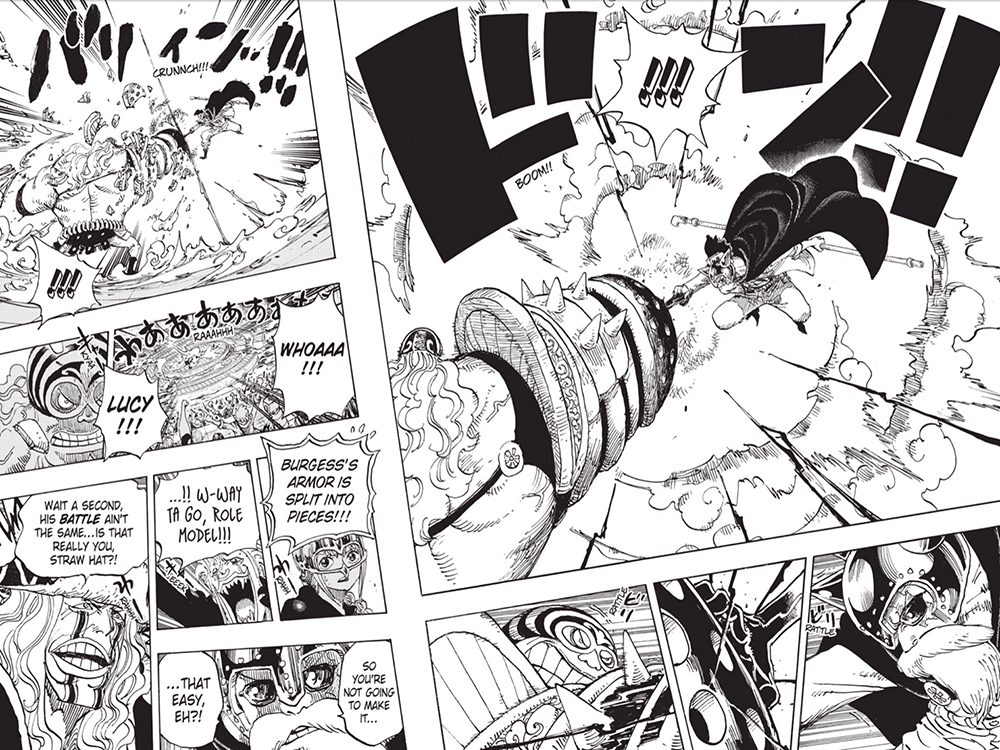 Dragon Ball Z Ch. 50
Who knew this was only going to be a temporary thing. Next week we lose Dragon Ball Z, and here I was hoping it would run through the whole series, to give me a chance to read it all the way through again. But I guess if we’re getting some new manga space must be made in the magazine. And while space isn’t really an issue in a digital magazine, the effort it takes to get an extra series ready for publication really does push costs up.

I enjoyed the Superman parallels with Kami, this was a part of the series I hadn’t read before, so I’m picking up a lot of details that I had missed before. I enjoy Dragon Ball Z a bit more when we aren’t focusing entirely on the fighting. And this was definitely worth the read for me.

I don’t know how we got through it, but we did. This was a long issue, and while I love reading all the extra manga, I look forward to a lighter load next week.

Don’t forget to mention in the comments which series was your favorite this week.