February 25, 2014 by Anna N and Nancy Thistlethwaite Leave a Comment

Heirs is available for streaming on Dramafever.

Anna: I’ve just finished watching Heirs, and if someone had told me months ago that I would be forcing myself to watch a show with Lee Min Ho and Park Shin Hye, I would have been absolutely flabbergasted. But Heirs has managed to produce a show that squanders a good cast due to the lack of an interesting plot. I can’t believe I watched the whole thing! Really, the only thing keeping me going was knowing that I’d have the chance to discuss it with you. So I’m hoping for a chance to process my feelings of resentment for losing 20 hours of my life watching this show. 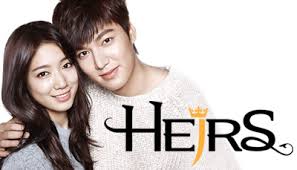 Heirs. This Picture is Much Better than the Actual Show.

Nancy: Ha! Though I think it is important we discuss this K-drama because it got high ratings and won drama awards for popularity in Korea. So basically Heirs is about a poor high school girl Eun Sang, who meets Kim Tan, a rich, unhappy boy. Her mother works for his family, and she ends up going to his posh school where the have-nots are bullied. It’s said the writer wanted it to be like a Korean Gossip Girl, and there are many similarities. But where Gossip Girl suffered from too many plot turnovers so that the characters couldn’t fully develop, here THERE IS NO PLOT. The characters interact with each other, but nothing really happens. They are all gorgeous. They are all unhappy. And…? And…? 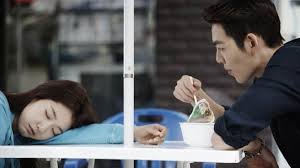 Anna: I think also it is somewhat similar to Boys Over Flowers, but Kim Woo Bin had the Tsukasa Domyouji part instead of Lee Min Ho. This is actually something that might have been interesting if it had been more fully explored, but nothing much happened. As I was thinking back over this show I thought that it would be great for people who want to see Lee Min Ho cry a lot, but I am unfortunately not one of those people. 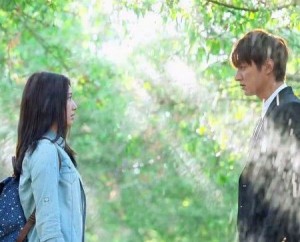 In California for some reason. Also inexplicably wet.

Nancy: But Eun Sang has no spirit or courage like Tsukushi does in Boys Over Flowers, so the formula does not work. I remember thinking, “It’s good Park Shin Hye can cry at the drop of a hat, because nothing else is going on….” Let’s talk about the shining light in this drama–the reason I kept watching (besides morbid curiosity): Kim Woo Bin! Woo Bin as Choi Young Do stole the show. Heck, he WAS the show. The climax in this drama did not involve the heroine. It was Young Do running to find Kim Tan. Young Do was the only character who showed growth in this drama. He was a compelling baddie. I enjoyed his scenes with Eun Sang far more than Kim Tan’s. Though sometimes it was painful to see how much the script tried to pull from Woo Bin’s role in School 2013 and fail. Unexpectedly, I also enjoyed Lee Bo Na [played by Krystal of f(x)]. Her scene running from Yoon Chan Young in the hallway was delightful. But she talked so fast that keeping up with the subtitles was a challenge. And what did you think of the scenes shot in California? 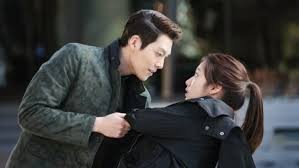 Woo Bin being annoying and awesome!

Anna: I agree that there was far too much crying in this show. Kim Woo Bin was great! At first I found Choi Young Do really annoying, but as the drama progressed it was clear that his character was the main one that had any character development written into the plot of the show. Young Do was also so much more dynamic in personality than the large supporting cast. I also enjoyed the supporting romance between Lee Bo Na and Yoon Chan Young. I looked forward to their scenes, just because the more lighthearted nature of their issues was a huge relief compared to the heavy handedness of most of the other scenes.

I thought that the California scenes relied far too much on the scenery and setting, which was a problem since they came at the start of the show and nothing was really happening to make me invested in the story. The American actors were uniformly terrible, but I was expecting that.

Nancy: Someone told me on Twitter that the “Californian” actors had been hired in Korea and sent over, which makes perfect sense as they all had dodgy accents and looked like they had just stepped out of a rather seedy underwear catalog. Not only that, but nearly all the “Californian” roles were offensive–don’t even get me started on the wife beater wearing a wife beater! I was embarrassed for the writer for the puerile racism in those episodes. But I did enjoy the scenery and had a giggle at the number of locations they spliced together. 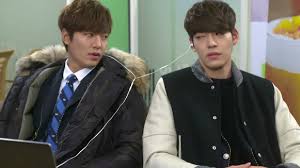 Anna: That rumor about the casting makes a lot of sense. Honestly, my expectations for the California setting were really low, and there wasn’t anything on those few episodes that was very good. I was holding out hope that the show would get better when the characters went back to Korea, and while more Woo Bin was good, if I hadn’t been planning on discussing the show with you, I would have given up midway through the season.

With the topic of wife beaters, I found myself mentally constructing a narrative about the costuming choices for the show. I wondered at times if the costume designer was deliberately trying to punk the audience, or if there was some other explanation for the terrible things that Lee Kin Ho had to wear. The sweaters were really something else. 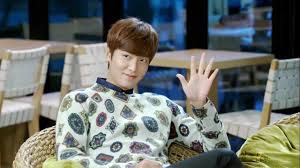 Hello. Here is a sweater.

Nancy: I tend to focus on knitwear when a K-drama gets boring, so it was good this was a fall/winter show! Min Ho in the pale pink angora cardigan to show his “soft heart”–BA HA HA HA! But Woo Bin’s sweaters were always dishy. They really should have a K-drama award for knitwear. 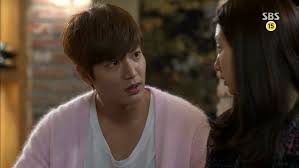 Lee Min Ho can wear almost anything, but I think even he cannot pull off pink angora.

I feel that we must mention Heirs was the most-watched drama on DramaFever in 2013. It won out over Master’s Sun, Two Weeks, and School 2013: all of which had great stories. Heirs is pretty with pretty actors, and of course there is Woo Bin. But if you require that something actually happens in your K-drama, this show is not for you.

Anna: Woo Bin was great, and I would honestly like to see Lee Min Ho and Park Shin Hye together in a show again with much better writing.

And one can hope that Lee Min Ho will make a triumphant return to hurting people with spoons once again!