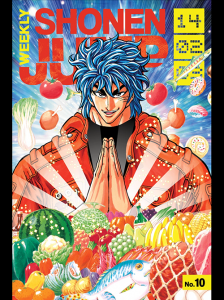 This was another really strong week, though the lack of Naruto might be what put me in such a good mood about this week’s issue. Who knows, I doubt that’s the case since I’ve actually been enjoying the past couple weeks of Naruto. Though perhaps for the wrong reasons.

Toriko Ch. 264
Toriko is back! After a month off we finally get the start of the Gourmet World Arc. Finally Toriko is going to save Komatsu and…wait did I miss something? Komatsu has already been rescued? It’s been over a year that they’ve been in the Gourmet World? What’s going on!?!?!

The thing about timeskips and manga is that they can work when we are warned ahead of time. And then there’s the approach Fairy Tail and Toriko took, which is to spring it on us with no warning. And that leaves me feeling conflicted. On the one hand we dodged a rescue arc, though it’s not like Midora would have tried to keep him. He said Komatsu could go, but the latter decided to stick around and wait for his ride. Chances are Toriko would have shown up, ready to fight, and Midora was all “Whatever, take him.” And I kind of wanted to see that!!

Given how much time we spent getting Komatsu captured, it feels like all of that was a waste of time if it doesn’t even matter in the end. I have to admit, while I don’t care for rescue arcs, given how they’ve been overdone, having it completely skipped like this feels incomplete.

An odd return for one of my favorite manga, but considering Toriko has a track record of amazing chapters, and some less than stellar, I’m willing to wait and see where this goes. 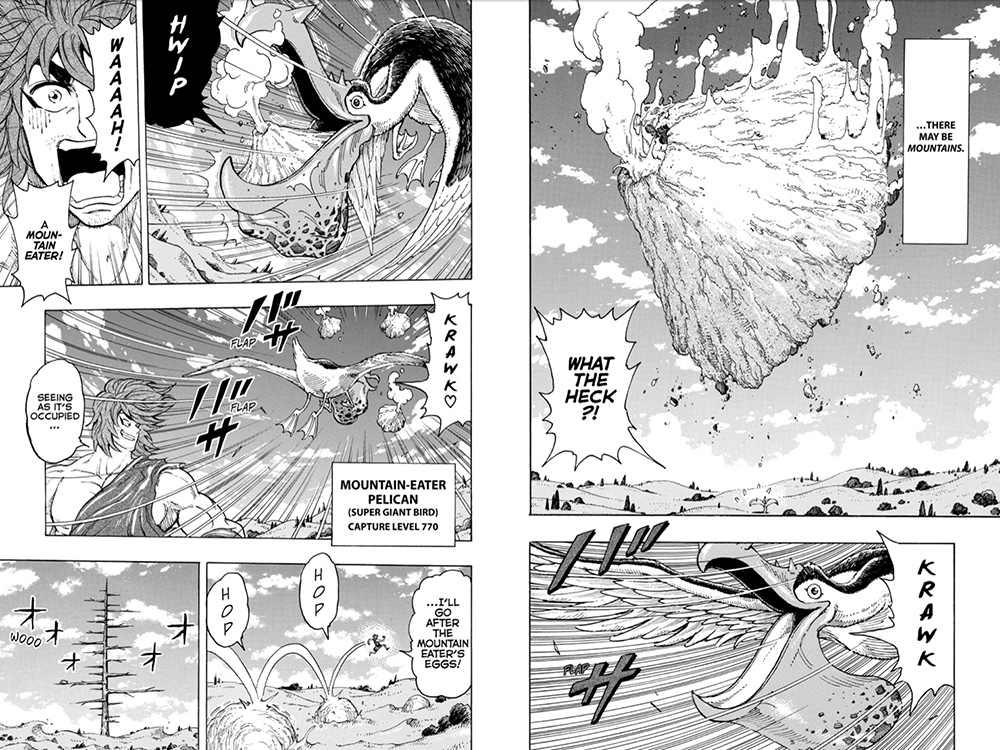 One Piece Ch. 736
It’s always a good chapter when a brand new character finds themselves trapped in Luffy’s pace. Though I have to wonder how on earth Zoro still hasn’t gotten used to Luffy always doing the wrong thing. You’d think he’d be able to predict it by now. I hope that at some point in the future we’ll get Luffy about to go and do the absolute worst thing possible and one of the smarter crew members catches him before he can.

And you gotta love DoFlamingo losing his cool as he realizes that the “Lucy” in the coliseum is not Luffy at all. It’s the beginning of the fall for him.

And then there’s a giant rock monster. Looks like we’re moving into the action packed climax of this story, and I can’t wait for all the fighting goodness. 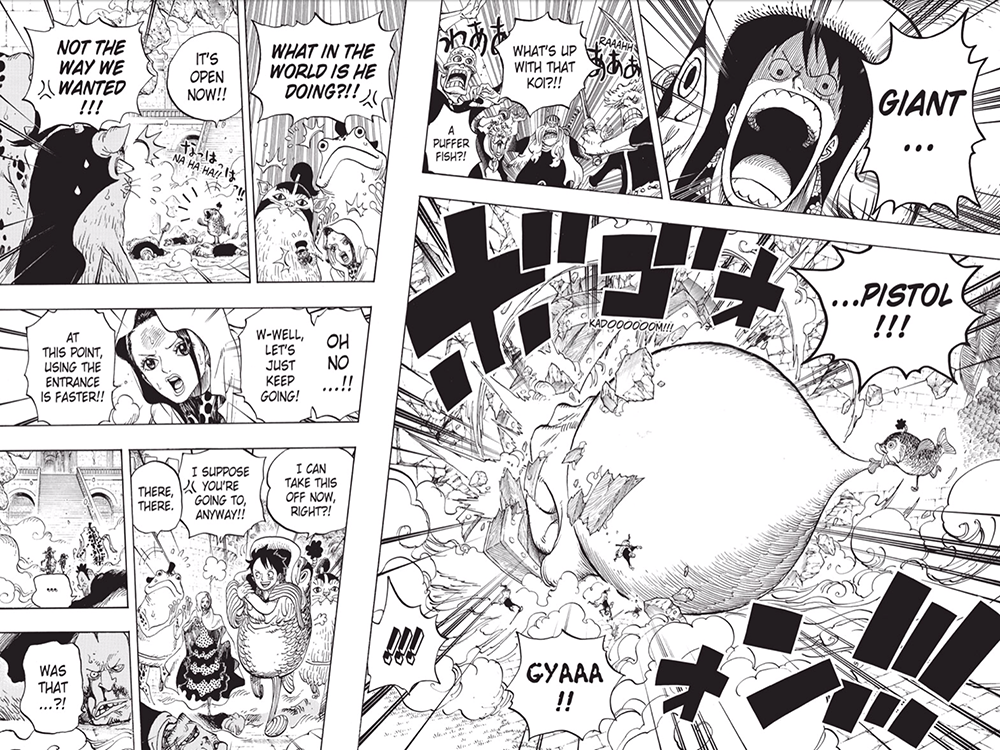 World Trigger Ch. 047
What is it with manga always having military groups act completely unprofessionally? Even if the neighbors invading aren’t exactly human, they must be some kind of military group, so what’s with all the bickering? It’s getting a bit tiring seeing this in every manga I read.

The escalation of the battle is handled very well, especially considering how early on in the series we still are. Compared to other series that had wars happen. And the fact that I actually care about the characters, compared to where we started with this series is kind of surprising.

Nisekoi Ch. 108
I’m curious to see where the next chapter goes, seeing how it will determine whether Haru is just a bland character or the worst character in the manga in a way that will never be surpassed by anyone else. Her obsession with her Prince Charming is an annoyance I would rather do without, but it would really make her a pretty awful person if she decides to pursue Ichijo, who to this point she hated, just because it turns out he did something nice for her in the past. It’d be kind of a crummy thing to pursue someone you know your sister likes just because you have a sense of romance that even Disney has been trying to distance itself from.

I wouldn’t be so annoyed by all this, if it weren’t for the fact that this series is really good when Haru isn’t the focus. And trying to play her off as another one of the girls being added to the harem feels unnecessary considering Nisekoi is usually so good at not being just another harem series. I’d hate to see it change that. And trying to pass off a pretty unlikable character as legitimate as the other characters that have been around for much longer would be a pretty boneheaded move. 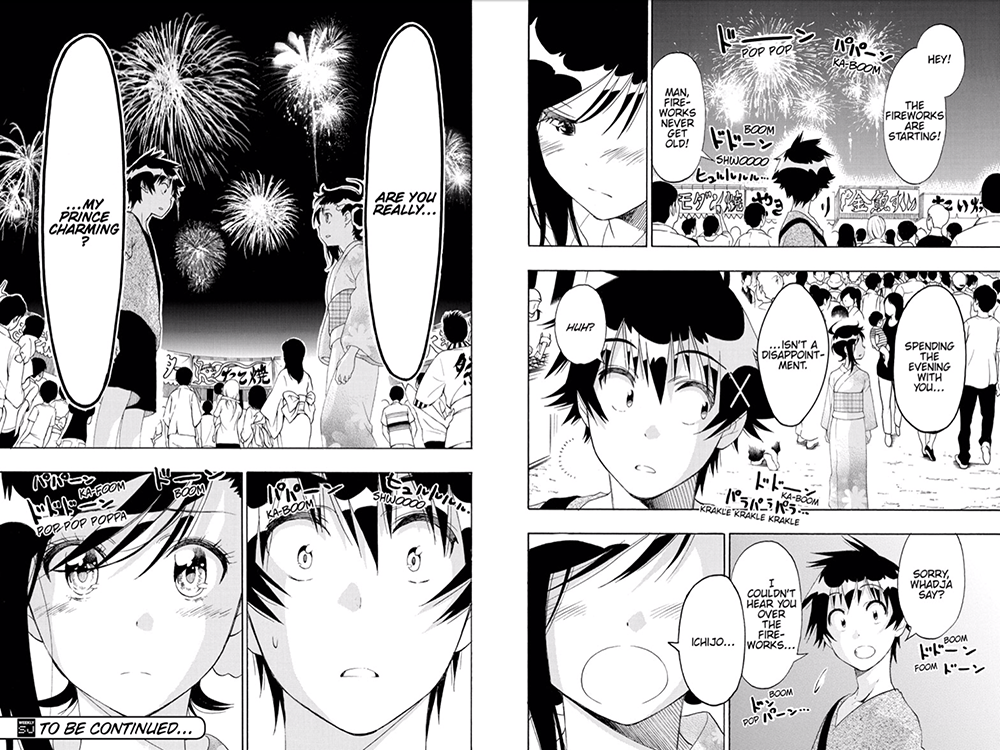 All You Need Is Kill Ch. 003
Definitely a strong showing for this series. The ongoing development of Keiji as a soldier is fascinating to watch, and the weaponry and battle tactics employed by the humans is very interesting. Though it makes me wonder why they even bother with guns if said guns are not effective.

The timeloop does raise some problematic issues that I’m not sure how the manga will adapt to. Keiji seeking out an axe like Rita’s doesn’t make much sense, if he’s in a timeloop he’d need to have it made new every time. I’m pretty sure there is no way for him to take it back in time with him. And if those axes aren’t standard issue, which they should be, how does he expect to carry one of those into battle without questions being asked.

And, of course, we get a third woman, with a design that really, really doesn’t fit in with the rest of the manga. They all feel like they belong in the dating sim version of All You Need Is Kill (would that be All You Need Is Ecchi?)

Still, this is a promising series, and the art by Obata, some design choices aside, is always a treat. 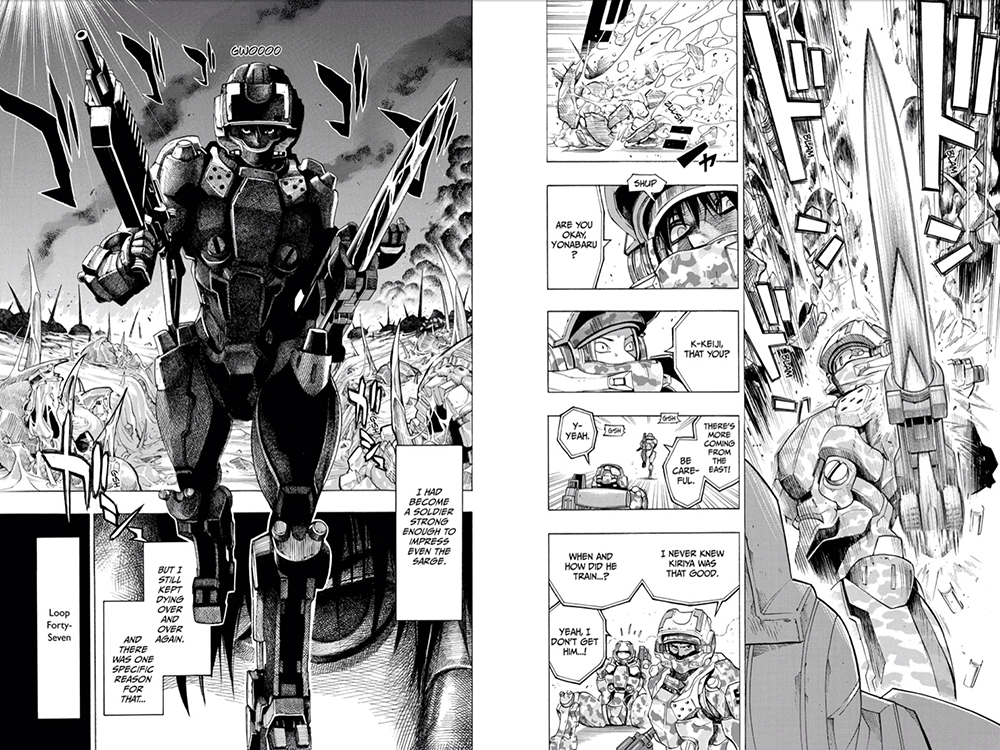 Bleach Ch. 566
I’m curious to see what the explanation for Rukia not being affected by Äs Nödt’s fear powers. She certainly has experience enough in her life that there isn’t much left to fear I imagine. And the continued abuse of Umlautte by Kubo aside, I look forward to seeing Rukia win a fight without almost dying herself.

At times, however the art gets a bit confusing and I can’t make out exactly what is happening. Which really shouldn’t be something Kubo has to worry about, considering how much space he gives his art. I could understand someone with a cramped art style having a hard time with the blocking of their action scenes, but when someone uses a style that leaves a lot of open space I wouldn’t expect them to be the one that has a hard time showing exactly what is happening.

Seraph of the End Ch. 010
There are few things sadder than seeing a writer continue to fail at comedy. Shinoa is not a funny character, and the constant attempts to make her endearing in an odd way just aren’t working. And it’s amazing how Yuichiro is everything a stereotypical shonen hero is. And yet somehow he manages to combine all the worst qualities of shonen heroes without any of the charm any of his predecessors have. Everything he does just infuriates me even more. When Luffy doesn’t listen and just does his own thing it’s endearing. When Yuichiro does it he’s the worst character in existence. And I’m not entirely sure why this is.

Maybe it’s because I’m an adult now, as opposed to when I started reading One Piece. Back then I could appreciate a hero that did his own thing, without taking any guff from anyone. Now anytime I see the same thing in a new manga my reaction is more akin to “Damn kid, can’t you just listen for once you little moron?”

It almost makes me sad that the vampires didn’t finish them off when they had the chance this week. It’s not like it would have taken long. Just a couple minutes and you could have been on your way. Please? 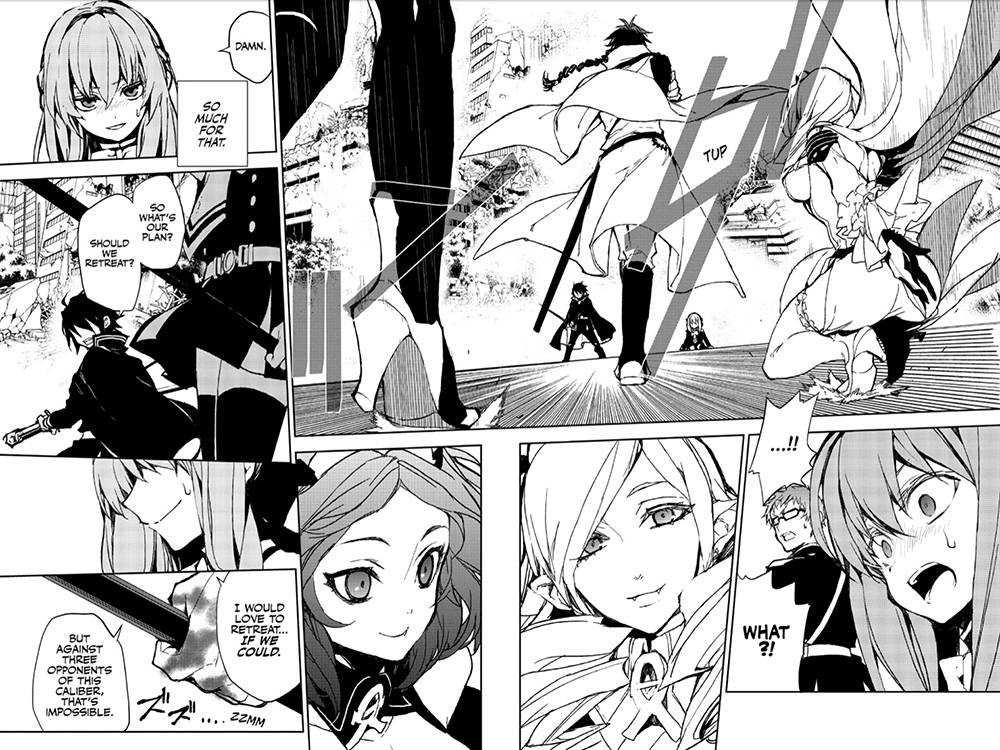 Dragon Ball Z Ch. 049
This chapter was really good. The obvious, “I have a message about this character” was kept to a minimum, and what did happen was really funny. Most people think of Dragon Ball Z as just an action series. But keep in mind Dragon Ball was a comedy originally. And Toriyama is still adept at comedy this early on in the Z incarnation.

Though I have to wonder, how is it that the Dragon Balls are limited by their creator’s power level, but they can resurrect the dead? Does that mean Kami can resurrect the dead? And if he can, why does he constantly make them gather the Dragon Balls? Unless the idea is that he has enough power to do so, but doesn’t know how? Which doesn’t make any sense because I know for a fact that if I had supernatural powers, and my ability was strong enough to learn how to raise the dead, I sure as heck would take the time to learn how to do it. Or maybe the idea is that he is powerful enough, but cannot do it without a focus like the Dragon Balls.

Either way, it’s never explained and I want a bloody explanation!