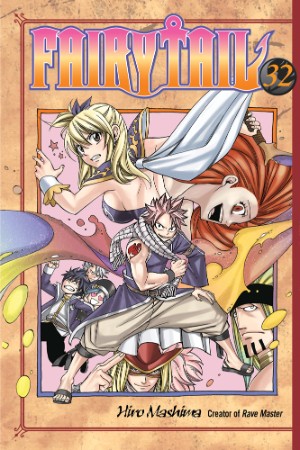 Fairy Tail, Vol. 32 | by Hiro Mashima | Yen Press – The Grand Magic Games start in earnest with a game of “The Hidden” where the contestants must discern which of their opponents is real, in a way that makes me think Hiro Mashima was playing a bit of Assassin’s Creed at the time he wrote this story. Gray and Juvia try to win it for Fairy Tail, but the sinister Raven Tail marks them and constantly harasses them until they end the game at the bottom ranks.

From there, the tournament continues into regular combat with Fairy Tail doing their best but due to outside influence both Lucy and Jellal (who is disguised as Mystogan) lose their battles, ending with both their teams in dead last. It all ends, after some other battles from the different competing guilds, with Charle making a dire prediction for their future.

Where I enjoyed the last volume a lot more than I thought I would, this volume was a couple steps backward for me. The biggest problem is that we see exactly why tournament arcs are such a tiresome trope in action manga. It’s nothing but fights for several chapters as we get through all the non-Fairy Tail wizards. That’s not to say the fights aren’t interesting. In fact Mashima does mix things up by including other types of competition, and Lucy and Jellal’s fights are well done. In Jellal’s case it’s a matter of just being really funny, but Lucy’s fight is another matter.

While the outside interference and unfair methods practiced by Raven Tail during Lucy’s fight really make us hate them, I find that the fight falls flat because I am unable to suspend my disbelief that nobody would notice that Flare is threatening Bisca and Alzack’s kid to keep Lucy from fighting back. Are we seriously supposed to believe that these two don’t even bother looking at their kid from time to time? Even if they aren’t worried about her being kidnapped, being surrounded by friends and all, isn’t it common practice for parents to at least glance at their child every once in a while? I’m pretty sure that if I were a parent I would like to keep my child at least in my peripheral vision.

And if they were keeping her in their peripheral vision, how did they not notice the speck of bright red that suddenly appeared in the corner of their eyes! It’s all used to make Natsu look cool, which we’ve had more than enough of, when a different manga artist would have played how obvious the whole thing was as a laugh.

But the biggest problem with the volume is the stretch of individual fights right towards the end. We get the big game, we get Lucy’s fight, but then suddenly we get a bunch of characters fighting that we don’t care about. And while Jellal and Jura’s fight is great, we’ve still been fatigued on fights in general by the end and the volume itself doesn’t leave a good taste in our mouths. So as far as essential volumes of Fairy Tail go this one is not among them. There certainly are worse volumes out there but were I not an avid collector, as most manga fans are, I’d consider skipping this one.

And yet, complain though I might, I do still enjoy this series. This just happens to be a volume that doesn’t have the useful distraction of good story or humor to distract from Mashima’s descent into complete ecchi artist.