SEAN: For the most part, it’s a Merry Christmas and not a lot of manga, as most publishers take the holidays off. We do have a couple of titles trickling in, however… 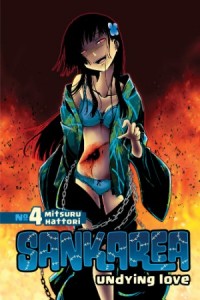 Kodansha has the 4th volume of Sankarea, which continues to walk the line between harem romance and horror movie. As you can see from the cover art seen here, Kodansha is gunning more for the latter.

ASH: Sankarea is such a strange manga. I’m enjoying it more than I thought I would, but some of the fanservice really detracts from the series’ quirky charms.

SEAN: And Seven Seas has the 3rd and final volume of Crimson Empire. I really like the heroine and basic premise of this series, but I admit I have not really enjoyed the manga as much as I have the author’s Alice series. Perhaps the otome game plays out better, or perhaps this volume will give us a big finish.

ANNA: I actually enjoyed the first volume of Crimson Empire quite a bit, and was planning on picking up subsequent volumes but hadn’t got around to it yet. Perhaps I’m just easily amused by the idea of an assassin maid in a reverse harem series.

SEAN: That’s it. Either of these under your stocking?

MICHELLE: Not for me, this time.

MJ: Sadly, I’m with Michelle, in that neither of these titles is for me. But that doesn’t mean I’m not buying this week! So much to catch up on…