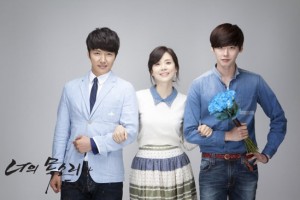 Anna: I Hear Your Voice is a show with a somewhat bland title considering the way it turns viewers into emotional punching bags. I’ve spent the past several weeks working through this show with a mixture of delight and dread. I Hear Your Voice takes some fairly typical plot elements like poor girl vs rich girl conflict and actually makes them interesting all while exploring the good and evil sides of human nature. Throw in a cute psychic teenage boy and an awkward but secretly handsome prosecutor into the mix, and you end up with one of the most unique dramas I’ve watched recently. I Hear Your Voice is streaming on Dramafever. 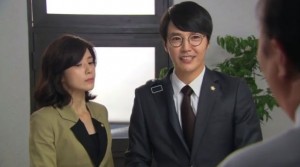 Yoon Sang Hyun inexplicably cosplaying as someone not hot.

The not-so-good poor girl in this drama is Jang Hye Sung, a public defender who is sarcastic, apathetic, and is interested in her job only because of the potential for a steady income. Her nemisis is rich girl prosecutor and judge’s daughter Seo Do Yeon, who has a cold and calculated approach to the law. Hye Sung and Do Yeon are connected through a series of incidents in their childhood, with one of the notable incidents taking place when they witnessed the murder of a man with his young son in the car. The son is Park Soo Ha, a boy with psychic powers who grows into a teenager nursing his childhood crush on Hye Sung. As Hye Sung starts the next phase of her professional career, she encounters another new public defender, the almost belligerently idealistic Cha Kwan Woo. These four lives begin to intersect in very interesting ways as they are all affected by the murderer of Soo Ha’s father, Min Joon Gook.

Nancy: The first episode of this drama made me scream out loud! It’s more than just suspenseful–it’s terrorizing. You must be courageous to watch it, but it’s worth it. The characters all face devastating moral dilemmas. Hye Sung often wants to take the easy way out, and Soo Ha becomes her moral compass. But doing the right thing always comes at a high price in this drama. Hye Sung is pursued by Min Joon Gook, a callous murderer with a grudge to settle. The police are limited in what they can do to protect her, and as a lawyer she knows the justice system is imperfect: bad guys go free and the innocent are convicted. Hye Sung has to start believing in the law to fight Joon Gook the “right” way. At times in this drama I wondered how the courtroom players could have so many conflicts of interest going on in the cases because everything is interrelated. But it did make for good drama! Soo Ha’s ability is hearing other people’s thoughts, and he can hear Joon Gook’s true thoughts as the murderer works the system to gain a chance to extract revenge on Hye Sung. It’s positively Hitchcockian.

Anna: One thing that I Hear Your Voice was particularly good at was lulling viewers into a false sense of security. After Hye Sung started her job as a lawyer, I thought briefly that it was going to turn into a more typical romantic comedy show, and then truly terrible things happened! But even when Min Joon Gook is at his worst, the traumatic events never seemed arbitrary or present only for shock value. Everything plays out as the characters deal with the emotional fallout in different ways, and the relationships between them change as a result.

I have to say too, that I appreciated the fact that there were plot elements that set up the opposition between Hye Sung and Do Yeon in a way that gave it much more depth than the typical antagonistic relationship usually explored in dramas.

Soo Ha had some hilarious moments as he began to realize that the woman who was the focus of all his idealistic hopes and dreams lives like a slob and sometimes indulges in snacks while crouching before her refrigerator in the middle of the night. The looks of confusion and disillusionment on his face were priceless. I also liked Hye Sung’s horribly unfashionable ways of shielding her face to avoid giving away her thoughts to Soo Ha. 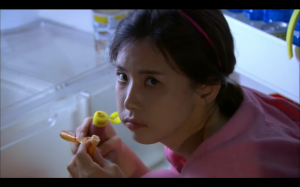 She is a delicate flower! Who enjoys sausages.

Emily: I admit, I have not finished this drama yet. The reason is because I’m kind of scared to! This show has me that worried for all the main characters! The creators are not afraid to take the plot to very dark places and leave you hanging on terrible cliffhangers. No one is safe! I had to pause while watching as it aired because those cliffhangers were killing me. I couldn’t handle waiting a week to see what happens. For me, this is a marathon show :)

Hye Sung is a great female lead. I like how although she is the ‘poor girl’ (vs the rich girl classmate) she is not a Candy type (the pure and innocent plucky heroine). She feels very… real. She makes good decisions and bad ones and can be both caring and generous as well as selfish and petty. (Soo Ha’s youthful idealism meeting the feminine reality of Hye Sung’s slobbyness was great). Her back story is unusual for a kdrama, and the link she has with Soo Ha must be one of the more unusual relationships I’ve seen in dramaland. 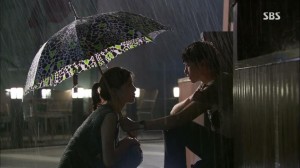 Someone left a perfectly good psychic young man out in the rain!

This is an interesting show in that even though it can be frightening and suspenseful, there is also a good deal of humor and some romance. That has to be a difficult combination to balance. I look forward to watching the rest, though I admit I may need to cling to a plushie to make it through the scary parts :D

Anna: Oh! I’m going to avoid spoilers except to say that I think you really don’t have to be scared of the ending. It is actually a nice counterpoint to all the dark places the show went, but it is still believable.

I also really enjoyed the fact that in the earlier episodes I was genuinely unsure of who the heroine would end up with, and the overall treatment of the second lead guy was much nicer than you usually see in kdramas. Sometimes the male second lead just fades away, but I didn’t think that was the case with this show. 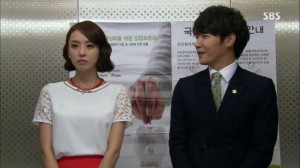 Seo Do Yeon and Cha Kwan Woo bonding in an elevator.

Nancy: I really enjoyed the Hye Sung role. Her character grows to such a satisfying degree. She regains the sense of justice she had as a child, but she’s still crafty as an adult. Although I am a romantic at heart, I thought the drama was stronger before Hye Sung and Soo Ha’s relationship changed in the later episodes, but it’s still worth watching.

Anna: Overall, I thought I Hear Your Voice had a refreshing mixture of plot elements and tone that made it very compelling although a bit nerve wracking to watch. This is definitely a great drama to watch if you are looking for something a bit different to appreciate. 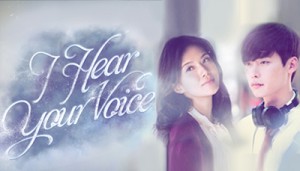