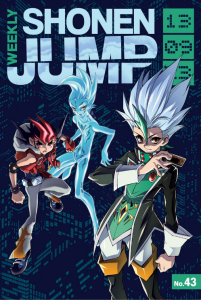 Hey kids! Do you like rants!? You do? Well lucky you because we’ve got another classic comedy moment this week, all thanks to Kishimoto-sensei!

Fortunately everything else was actually okay otherwise I might have lost it this week.

Jaco The Galactic Patrolman Ch. 010
I was right about the rocket going down, not so much about Pants (or whatever her name is) dying. But I guess I should have expected as much, this is, after all, Toriyama, the man that figured out a way to kill every single one of his characters and bring them back anyway. I guess I was just hoping it would go a darker route. Still, with this being the second to last chapter of the series I still find myself more or less at a loss of what to say. I guess I enjoyed that the detective turned out to be reasonable, so at least we don’t have to worry about an irritatingly stubborn kind of antagonist. And I do admit that Jaco’s line at the end of the chapter was the best thing in existence. But, am I the only one that remembers there was supposed to be an upcoming alien invasion?

Naruto Ch. 647
For everything that Kishimoto does to make me maybe like Naruto again he then ruins it all with his awful sense of comedy. I’m almost speechless at how horrible his humor has gotten. What exactly was supposed to be funny about Karin’s scene? Here we had a decently tense scene and what does Kishimoto do? He brings his second worst character back and has her think something perverted. The world is about to be destroyed, this is no time for misplaced comedy. He keeps doing this too. Kishimoto used to be moderately funny, but it’s like he lost his mind. It’s almost like he became a father or something and lost all sense of humor. As all fathers inevitably do.

Is his editor not doing his job? Or is his sense of humor just as bad? At what point does any professional with a working brain think, “Hey, this tense moment? Let’s screw it up with bad comedy.” It probably wouldn’t be so bad if it weren’t Karin, who has become a poster child for everything wrong with Kishimoto’s writing. She was the first girl to escape from the dreaded “Sasuke Crush Syndrome” and the first character who actually went from “Well this is a stereotypical waste of space” to a character I actually kind of admired for finally learning that Sasuke is a raving lunatic. So what does Kishimoto do with her? He goes on to show that apparently Sasuke is so irresistible that even his attempted murder victims can’t help but fall in love with him again. 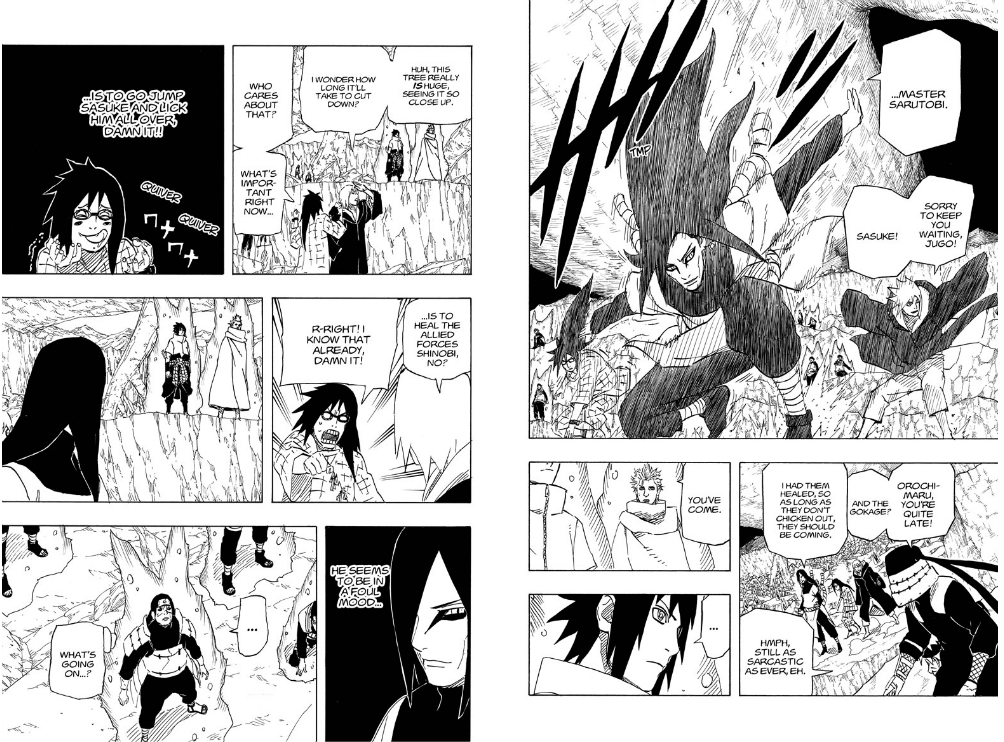 What is going through his mind that makes him think this is okay? Sasuke would be perfectly fine, if he were a completely different character, but how exactly are we supposed to take anything he does seriously when women are falling for him left and right and won’t leave him be even when he tries to murder them. This isn’t a well written character, it’s a stinking harem series protagonist.

The rest of the chapter doesn’t even matter, because all I could think about was how terrible Kishimoto writes Karin and how he apparently has lost all understanding of what humor is. Reading this series is like reading something written by a space alien. They clearly are trying really hard, but they just don’t understand humans and can’t properly represent them in writing.

Toriko Ch. 250
Well then. I guess it doesn’t count as cannibalism if you feed your young to pigs and then eat the pigs, rather than just eating the young yourself. I…wow…yeah…

What is up with Toriko and randomly getting far darker than a series with such a goofy premise has any place being. Granted, I loved Midora’s back-story, it’s certainly unique, but I can’t focus on anything but this image of babies being fed to pigs. I…jeez…

I do like the explanation for how Midora’s power works. It’s not a, “I have this power because.” It actually ties in to the ability he’s already displayed. Which is solid writing. Now if only I could get that image out of my head. 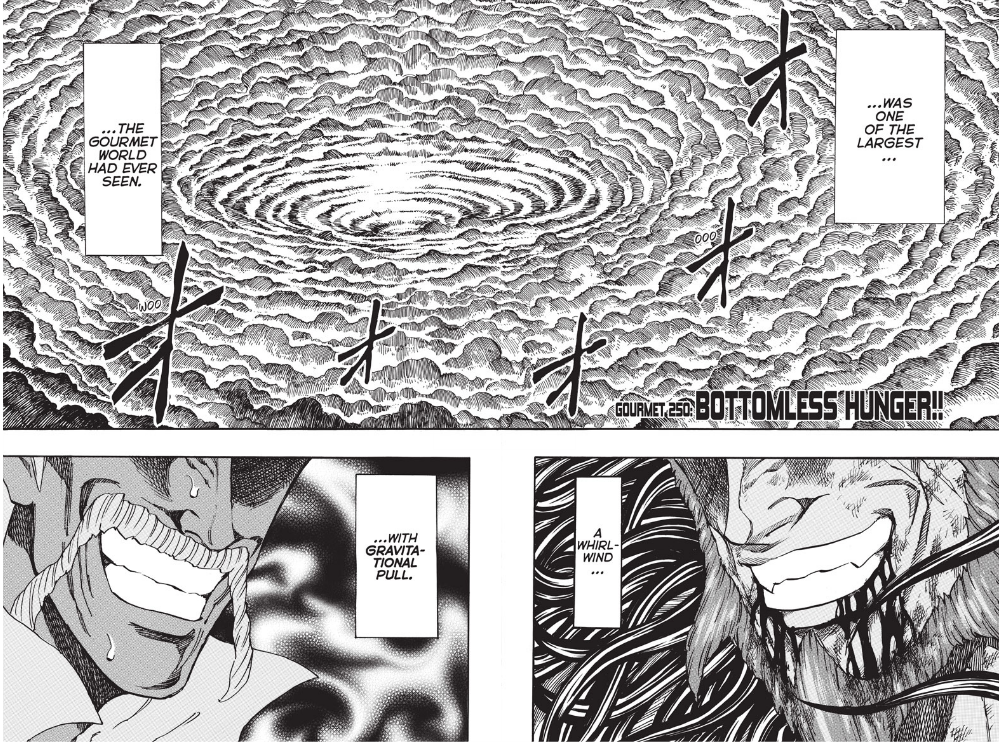 One-Punch Man Ch. 26
This is turning out to be the goriest week for shonen manga. First we’ve got pigs eating babies, and now Genos pretty much must have lost all his biological components to that acid.

I appreciate Mummen Rider’s scene. It may be mimicking previous scenes from this arc, but in this case I think it works better because we got rid of any illusion that “determination will win the day”. It’s very clear he’s not going to win this under any circumstances. And yet he fights, and this makes him even more sympathetic. I can only hope that he becomes the third member of Saitama’s group. He just seems like he’d be a lot of fun. 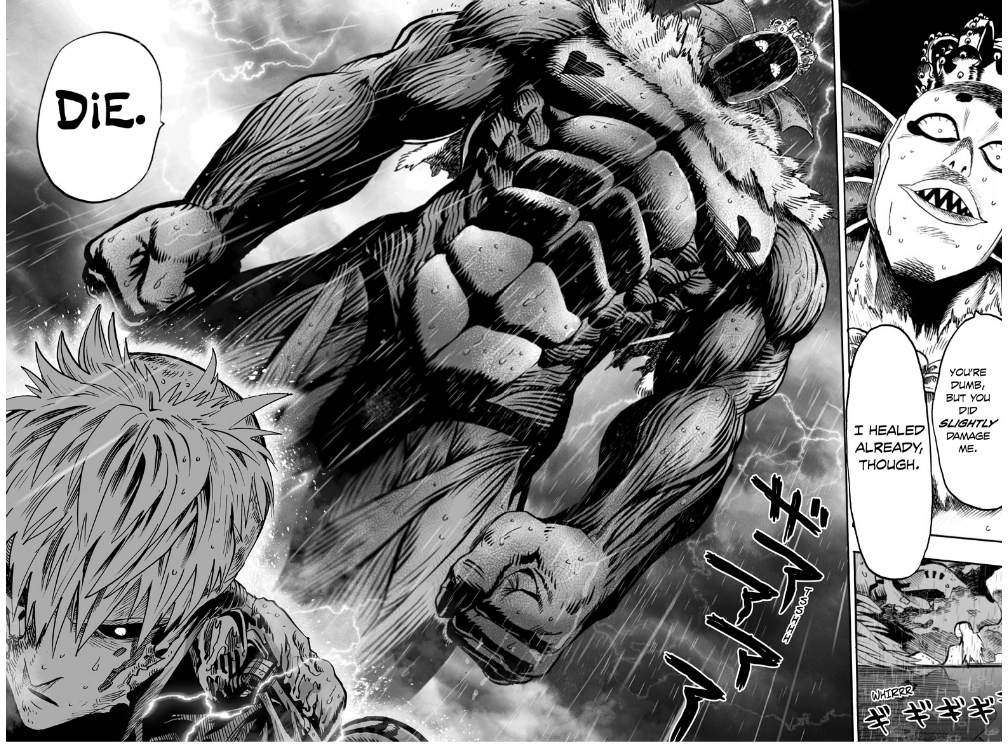 World Trigger Ch. 031
Aaaand I’m starting to hate this series again. Sure there were some good moments, such as Director Shinoda’s declaration, and the fact that he’s apparently the only sane person there. But anytime Kido does anything I keep thinking, “Why hasn’t the board removed him from power? The man is obviously imbalanced, somebody impeach the guy before he blows up a town!”

Pretty much most of the problems this series has can be symbolized with a picture of Kido’s face. The guy is obviously an antagonist, but he’s in a position of authority in what is clearly a militaristic/corporate setting. Do we not think that Bill Gates would have been kicked off the board at Microsoft if he’d decided to send a hit squad after the Genius Bar in the local apple store? There are just some things that don’t work in the real world, and the more a story relates its events to the real world the fewer leaps of logic and plot holes there can be.

Nisekoi Ch. 091
Yeah, uh, amnesia does not work that way. I’m pretty sure you don’t forget everything from the time you had amnesia when you remember everything before that. Well, I guess it works to further confuse the readers about what exactly happened in the past. As long as this series goes back to being funny I won’t complain. For someone that prefers a different girl with Raku this kind of chapter can be tedious or frustrating. Speaking as someone that prefers most of the girls over Chitoge I have to say this wasn’t my favorite chapter. And yet, it’s not like those Ryoga/Akari chapters from back in the day when I was reading Ranma 1/2, in that I can actually tolerate Chitoge’s presence and even enjoy her most of the time. So kudos, Naoshi, you’ve created my least favorite character and yet you’re able to keep me from hating her. Not sure how you did it, but you did. 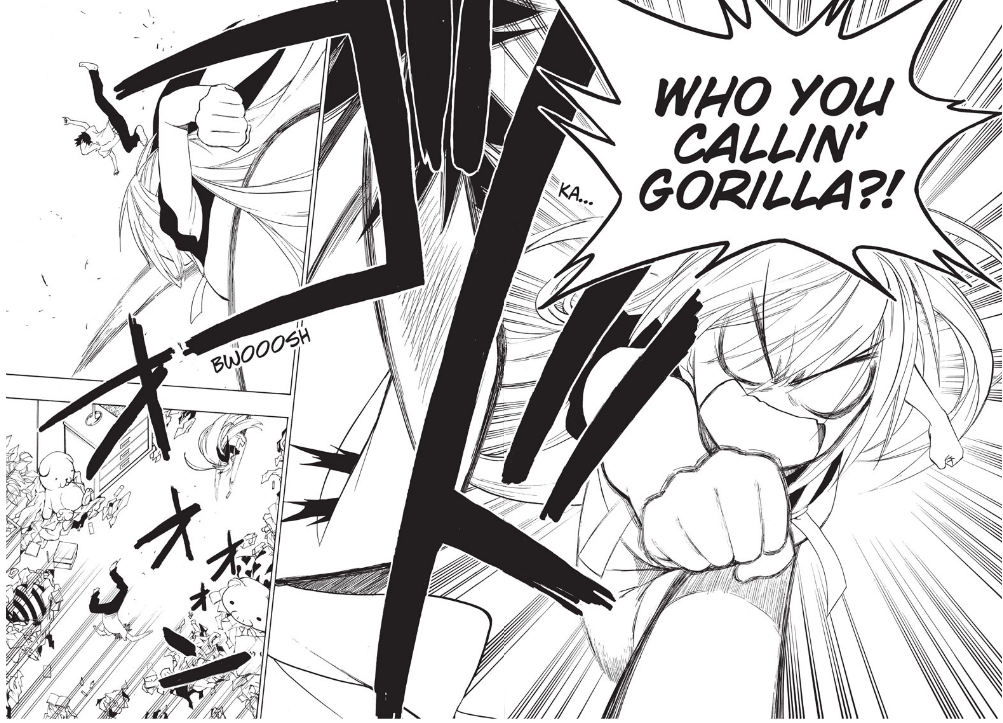 Bleach Ch. 549
Dammit manga artists, stop murdering/maiming children! First we got Toriko and now we’ve got this chapter. I may not have my own kids, but I’m certainly old enough for any violence against children to make me very uncomfortable. So please, knock it off!

And what exactly is up with Soi Fon mastering the Shunko because she doesn’t have her bankai? She specifically said, the first time she used it, that she doesn’t like her bankai because it’s the exact opposite of how she likes to fight. How exactly would having her bankai to rely on keep her from training her preferred method of fighting when she never wants to rely on it in the first place? It’s like a fist fighter not practicing his best punch because he has a knife to rely on. Sure a knife is more powerful, but if he’s better with his fists and prefers using his fists why would having a knife keep him from practicing his punches?

I understand what Kubo is doing, he wants his characters to find new power without relying on their trump cards. But Soi Fon is not the character to do that with, because she never relied on her bankai in the first place. In fact, why was she one of the ones to pull out her bankai during the Quincy invasion?

At least the Quincy aren’t going down so easily. Sure I’d like to just get to the conclusion of this series, but I’d prefer if we do it right rather than rushing through everything. So for now I’ll sit here, judging every move Kubo makes as if he were a beginner. Because there is a point where an experienced creator starts getting lazy and making rookie mistakes. If he can avoid those we might actually remember this series fondly after all.

Dragon Ball Z Ch. 032
Well, Nappa’s served his purpose and now it’s time for the main event. Nappa may not have been a very interesting character, but I always feel a bit of regret that he didn’t stick around for longer. Vegeta is fun and all, but I would have loved to have all the three Saiyan characters stick around together. It could have been a wacky sitcom.

Though, to be fair, most of my wish to keep Nappa around revolves entirely around the DBZ Abridged version of his character.

Not a good week to be a manga child. Not sure where the sudden violence against children is coming from, but let’s hope it doesn’t repeat next week. Besides that, the chapters were mostly okay to not so great. There was still enough to enjoy, but more than a few series chose this week to show off their weaknesses.