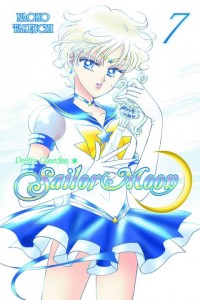 What a difference a day makes, 24 little hours! I was going to write down a red hot review after finally, FINALLY getting through volume 7 of Sailor Moon. Then sleep and fatigue set in and I had a think about it. So now I’ll temper my steel as some of my thoughts last night don’t make a whole lot of sense the day after. So let’s begin!

We find our heroes recovering from their last battle and wondering about the mystery behind the Mugen Academy—specifically why the new Sailor Senshi Sailors Neptune and Uranus are so antagonistic toward the rest. Meanwhile, Chibi-Usa is starting to worry about her new friend Hotaru Tomoe, a girl whom we met briefly in volume 6. Hotaru is the daughter of Professor Tomoe who runs the Mugen Institute, which is part of the Mugen Academy. Are you following me so far? Because I can help matters by telling you that Mugen Academy is evil. We know this because Master Pharaoh 90 and her/his (I don’t want to guess at this point) minions, the Death Busters, are in cahoots with Professor Tomoe. See, the ol’ Prof is attempting to build the perfect life form, and he thinks the best way of doing this is by bonding life energy onto creatures of Tomoe’s design. What Chibi-Usa doesn’t know is that Hotaru is hiding a secret. I like how Hotaru clearly understands that her father’s work and she herself are dangerous, and that she tries to shield Chibi-Usa from the truth while trying to have a life. The poor girl just wants to be normal, but because of who and what she is, anyone innocent around her is in danger.

The thing that annoyed me about the last volume is the change in tone for Neptune and Uranus. Before, they were playful and a bit mysterious but now they are openly hostile toward Usagi and the rest of the team. They believe as protectors of Silver Millenium (the kingdom on the moon that Usagi and the rest once lived on) that they have to go ahead of Usagi who, as the future Queen, is in their care. They want to stop the ascension of Sailor Saturn who is only supposed to arrive on the scene when the world must be destroyed. This presents me with an interesting conundrum: if the two Sailor Senshi wish to prevent the destruction of, well, everything then they have to kill another Sailor Saturn before she can become a Senshi, then doesn’t that mean that they knew they would have to kill her from the get go? Plus, wouldn’t killing her go against being a team? It’s not really explained, so I’m left with these questions. Thankfully, Takeuchi doesn’t confuse the issue by having them explain the whole nature of the Silver Millenium and the pre-destiny of the Senshi. Still, Usagi’s constant cries of “Let us help you and work together!” and the Outer Senshi’s replies of “NOOOO! WE have to do this on our own! IT’S FOR YOUR OWN GOOD!!!” are confusing, as they are unnecessary.

One of my favourite characters from earlier volumes is Sailor Pluto. Sailor Pluto met her end in a previous volume and I missed her, because while she came across as very formal, her love for Chibi-Usa allowed a crack in her armor; she became my secret favourite Senshi (don’t tell Sailor Venus). Now, we spotted her in a reincarnated form at the end of volume six, and here she turns up again as Setsuna Meio, a researcher of all things. That’s not important because she’s back as Sailor Pluto as well. Strangely, while the other Senshi all became their alter-egos after coming into contact with Usagi, Pluto, along with Neptune and Uranus, already know that they are Sailor Senshi. This means they already know their jobs better than the others and they sometimes come across as older sister types despite being the same age. Pluto’s personality isn’t as full-on as the other two, but she’s not the same Pluto as the original version. The formality isn’t quite there yet, and she does love the other Senshi, but she feels as Neptune and Uranus do and wants to deal with the Mugen Academy without the Inner Senshi.

As for the fight with Mugen itself, the team receives a new power level and Usagi becomes Super Sailor Moon and lays a Chuck Norris-style beatdown on the minions of Master Pharaoh 90 (what’s with these ridiculous names!?). The others do try and fight against Mugen but they are quickly overwhelmed by the bad guys and Professor Tomoe (who goes all Dr. Jekyll and becomes a monster using his own research). He gets put down in the blink of an eye, so there’s something to be said for planning ahead. The greatest danger the team and Usagi are up against is something that I’ve been meaning to talk about since the character of Chibi-Usa was introduced. Hotaru goes mad with the creature that is inside of her and the creature, in lashing out, accidently absorbs the crystal energy that Usagi and Chibi-Usa both share. Chibi-Usa, being Usagi’s daughter, carries this ’round in the form of a crystal avatar. When it is removed, Chibi-Usa becomes fatally ill. Mamoru stays with her while Usagi goes to bring the smackdown on Mugen and get Chibi-Usa’s energy back. Now, this leads to said point of order. How does Usagi view Chibi-Usa? She and Mamoru ARE Chibi-Usa’s parents in the future so Mamoru clearly has paternal instincts toward his future daughter. But Usagi seems to fight for Chibi-Usa at every turn without showing any sign that she sees her as a daughter. It’s not like when she fights for the other Senshi—she fights for them in her own way. When Chibi-Usa is threatened, Usagi pulls out the big guns and not in a proactive way. When Usagi powers up and saves Chibi-Usa, she finds strengths and powers that she didn’t realize she had. Maybe this is her way of saying “this is my daughter, evil-doers, and I will kick your arse if you threaten her!”

The end of the manga calls for a showdown between the remains of Hotaru and Usagi. Whatever is left of Hotaru’s physical body is under the direct control of Master Pharaoh 90 and has destroyed the lab, the buildings and the academy. I don’t know how they’ll cover this up come the morning! Something happened to Hotaru’s spirit which leads me to believe she will be quickly resurrected in the next couple of volumes. I know I’m giving somewhat short answers here but this stuff literally comes up at the last second in the volume so I have no information to go on. Whatever happens, Sailor Moon is as always a mixture of the good, the bad and the unexplained.