MELINDA: Good morning, Michelle! I greet you this morning, dizzy with the particular brand of glee that can only be brought on by epic shoujo fantasy. How about you?

MICHELLE: Much the same, actually! With a side of gratitude that the epic shoujo fantasy in question is a) completely available in English and b) in the process of becoming easier to obtain!

MELINDA: Indeed it is! And really, it is a dream come true. When manga publishers first began launching their various digital initiatives, one of the things many of us hoped for was that these venues would eventually become a platform for re-releasing out of print manga. In particular, I expressed a hope that we might see some of Viz Media’s “scads of fantastic 80s and 90s shoujo,” most of which has become difficult to obtain in print.

Fortunately, Viz seems to be on the same page, as they’ve recently begun releasing some of these older shoujo series in digital form! They began with one of my favorite series of all time, Saki Hiwatari’s 21-volume epic Please Save My Earth (volumes 1-6 are available now), originally serialized in Japan beginning in 1987, followed recently by three series from the early 1990s, Kaori Yuki’s Angel Sanctuary, Chie Shinohara’s Red River, and Kyoko Hikawa’s From Far Away. This week, Michelle and I decided to delve into the latter two of these series, whose first volumes are now available at both vizmanga.com and on Viz’s mobile apps.

Michelle, would you like to choose which we’ll discuss first? 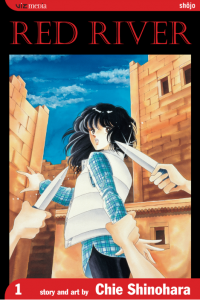 MICHELLE: I’m inclined to save the best for last, which means that in my personal opinion, Red River should go first!

I actually own all of Red River in print, but had never read any of it ’til now. It has the distinction of being the final series in the now-defunct “shojo” imprint to reach completion. Though it starts off rated for older teens, I have a distinct memory of the later volumes being shrinkwrapped, so presumably sexy times will eventually ensue.

Anyway! Both of the series we’re going to discuss today involve a modern-day Japanese schoolgirl being transported to an unfamiliar environment. In the case of Red River, things are looking good for fifteen-year-old Yuri Suzuki. She has just passed the entrance exam for the high school of her choice and shared a first kiss with her good friend turned love interest, Satoshi. But on the evening of her family’s celebration dinner for her achievement (the exam, not the smooch), she begins to notice that water is acting strange around her. Soon, a pair of arms is reaching out to her from fish tanks and bath tubs, trying to pull her in. Though she manages to avoid water for a little while, she’s eventually captured via a puddle and transported to the Hittite Empire in 14th century B.C., where a scheming queen seeks to use her as a sacrifice to ensure that her son (currently sixth in line for the throne) becomes king.

MELINDA: Fortunately, Yuri quickly becomes acquainted with Kail, third son of the king and no friend to his stepmother, the scheming queen. Though he’s a notorious player (whose methods of “saving” Yuri generally involve pretending she’s his sexual conquest—something he’d clearly like to achieve in reality as well), Kail appears to be genuinely trustworthy, at least when his own life is on the line. Unfortunately, though Yuri is grateful for his protection, her desire to return to her own land drives her to recklessness, placing both her life and that of a devoted slave, Tito, in peril.

As it happens, I agree with your choice of which to discuss first (and why), which isn’t to say that I disliked Red River in the slightest. It’s immediately engaging and action-packed, with a relatable, plucky heroine and a fascinating historical setting. Even playboy Kail manages to be a genuinely attractive love interest, despite my weariness with his classic rake persona. What does weaken this story, however, is just how easy things are for Yuri, at least in this first volume.

While it may seem odd that I’d consider her path “easy” at this point—she has been marked for death, after all—there are some ways in which things really are inexplicably so. The issue of language, for instance, is immediately discarded, as Yuri finds she can suddenly understand the Hittite’s tongue simply by kissing Kail (insert inappropriate “tongue” joke here). Because of this, she’s able to grasp her situation immediately, including recognizing exactly where (and when) she is. Also, by being under Kail’s protection, she’s also suddenly a princess, with the ability to stop executions and generally direct people to do her bidding, which puts her in an immediate position of power, at least within Kail’s realm.

MICHELLE: Your last paragraph there neatly encapsulates my main criticism of Red River, though there are things about Kail that bother me, too. (I don’t think he’d follow through with the threat, but dialogue like “Now stop grousing or I’ll bed you for real” will never sit well with me.) It feels a little like Shinohara is squandering this rich environment and the potential for adventure in favor of romance. True, Yuri does end up in peril by the end, but it’s due to her impetuous, uninformed insistence on retrieving her clothes from the scheming queen and pretty much just a plot device designed to allow Kail to swoop in and save the day.

However! This series does run for 28 volumes, so I am willing to acknowledge that the story could move beyond its origins and go interesting, complicated places.

MELINDA: Wholeheartedly agreed! Despite my quibbles (and I do share your discomfort with Kail’s threats—hello, rape culture), 28 volumes of 90s shoujo fantasy is not something I can possibly reject, and my expectations are high!

MICHELLE: Of course, 14 volumes of shoujo fantasy is nothing to sniff at, either. Want to do the honors of introducing From Far Away? 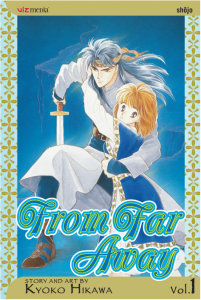 MELINDA: I’d love to! Though half the length of Red River, Kyoko Hikawa’s From Far Away took several years longer to complete, running in Hakusensha’s LaLa magazine from 1993 to 2003. And if the first volume is any indication, this was time well-spent.

High school student Noriko has been experiencing a recurring dream set in a mysterious land filled with gorgeous landscapes and unfamiliar wildlife. As she walks home from school with her friends on one ordinary afternoon, television news anchors warn of a terrorist threat involving small bombs planted around the city by a recently captured suspect. While her friends hash out theories about Noriko’s dream—whether it’s a past life, a portal to another dimension, or pure fantasy fueled by Noriko’s sci-fi author dad—Noriko’s attention is drawn by a stray ball, leading her to an abandoned paper bag which explodes just as she approaches.

Though no trace is left of her body, Noriko is presumed dead. Meanwhile, Noriko has fallen into the same world she’s been dreaming about, where she is identified as “The Awakening,” a supernatural being prophesied to grant power over the legendary Sky Demon—the most destructive evil known in that world—to any nation that possesses it.

MICHELLE: Like Yuri, Noriko is fortunate enough to encounter a formidable ally right off the bat, though things are distinctly less easy for them. Izark might be a powerful warrior who saves Noriko from the political factions attempting to capture her (not to mention gigantic caterpillar things), but the language barrier prevents them from understanding one another and her fear and confusion seems to get on his nerves. Still, he’s unable to ignore her when she’s obviously upset and she comes to trust him. The non-verbal storytelling here is great, and I love that Noriko grows ashamed of her earlier behavior and starts trying to learn the language so that they may better communicate.

Despite being an imaginary fantasy world, the setting here feels more real than the Hittite setting in Red River, and has an abundance of the adventure feeling that I was missing in the other series.

MELINDA: My feelings exactly, Michelle, on all counts. And really, much of this story’s strength is due to the author’s inclination to prioritize adventure over romance, at least in the first volume. Though strong, roguish Izark is clearly leading man material by any shoujo fan’s standards, both he and Noriko are entirely focused on survival at this point in the story, with no romantic action to be found.

Another factor in From Far Away‘s success as fantasy-adventure is its overall complexity and sense of intrigue. While Red River‘s villain is firmly established from the beginning, things are less clear-cut in Noriko’s new world. With every nation competing for control over The Awakening, everyone is a potential enemy, and it’s not clear at all whom we should be rooting for—including Noriko herself! Though it seems fair to hope that our heroine can’t really be the harbinger of evil, it’s little more than a hope this early in the story, and Izark’s origins and intentions are even less clear. Furthermore, the series is already peppered with some extremely interesting supporting characters, including pint-sized seer Geena Haas, her mercenary father Agol, and a whole host of potential enemies who are aggressively hunting The Awakening.

Perhaps most telling is the fact that as soon as I finished From Far Away‘s first volume, I rushed to purchase the second. I suspect I’ll begin reading it the moment we’ve finish this column.

MICHELLE: I also wanted to immediately proceed to the second volume! I actually read and reviewed the first five volumes of From Far Away a little over three years ago, and though I no longer remember specifics, I remember feeling that it just kept getting better and better.

I do want to mention a couple of random thoughts. Something about the setting of this world—probably the huge insects and people standing whilst piloting flying craft/creatures—reminds me of Nausicaä of the Valley of Wind, and it’s not a comparison in which From Far Away suffers. Too, I wonder if the story will take on a Life on Mars idea… like, is Noriko dead/injured in the present day or is she really experiencing all of this? Granted, it doesn’t seem at all like Hikawa plans to go in this direction, but what with the bombing and witnesses to Noriko’s disappearance, it makes me wonder.

MELINDA: I’ve been wondering that, too, Michelle! Unlike Yuri in Red River, Noriko really is assumed to be dead in her world—and reasonably so—which immediately puts her mortal status in question, and also raises questions about what place she’ll have back in her world if she really is alive and able to return. I also can’t help being curious about Noriko’s father, whose career as a science fiction writer just makes him… interesting. And potentially involved somehow? Who knows?

I think it’s pretty obvious that we find this series compelling.

Of course, no column like this would be complete without me throwing in a plea for Basara to be the next out-of-print epic shoujo fantasy in VIZ’s catalog to receive the digital treatment.

MELINDA: I second that plea and add (predictably) Akimi Yoshida’s Banana Fish! Because, let’s face it, Yoshida’s New York is every bit the fantasy that is Tamura’s post-apocalyptic Japan. Bring ’em on, Viz!

Read Red River and From Far Away at vizmanga.com.