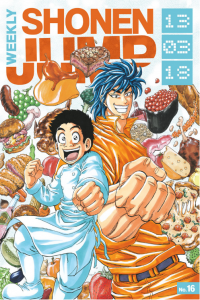 Well, this is the week that One Piece is not the best manga chapter in the magazine. But not so much thanks to the merits of the other contenders, rather it’s because One Piece was on hiatus this week. It’s kind of amazing how the only way other manga seems to have a chance is when One Piece isn’t around to act as a comparison.

Toriko Ch. 226
It looks like Sunny and Tommyrod’s fight is about to come to a close. Considering how large this arc is and how many fights we have to get through, I’m not surprised that one of the main fights of this arc is going to be resolved in what will apparently be less than five chapters. It definitely helps that this week’s chapter explains where Sunny got his power up from. As long as they’re done with style, I don’t mind unexplained power ups, but the fact that we actually got an explanation helps a great deal. This arc has been a lot of fun, and while it may not be the best for non-action fans, anyone already enjoying Toriko is most definitely enjoying this along with me.

Bleach Ch. 530
I generally avoid places where manga fans congregate, but even my absence from tumblr wasn’t enough to keep me from feeling the waves of “shipping enthusiast” metaphorically breaking over me. There’s just a sense—a disturbance in the force I suppose you could say—whenever I see something that could be used as fuel for shipping debates. And while I try to avoid those debates with a passion, I can’t help but chuckle every time I find a nugget. I’ll leave you to find out what exactly I’m talking about here.

As for the chapter itself, I’m continuing to enjoy seeing the previous generation. Ryuuken was a lot more sympathetic than I thought he would be, after all the times we’ve seen him in the manga before. It’s the small pieces in the manga that make it all the more enjoyable. Ultimately though, I can’t wait to find out what the deal is with the apparent Vasto Lorde revealed at the end of the chapter. I think Bleach fans will recognize that particular design, hm? 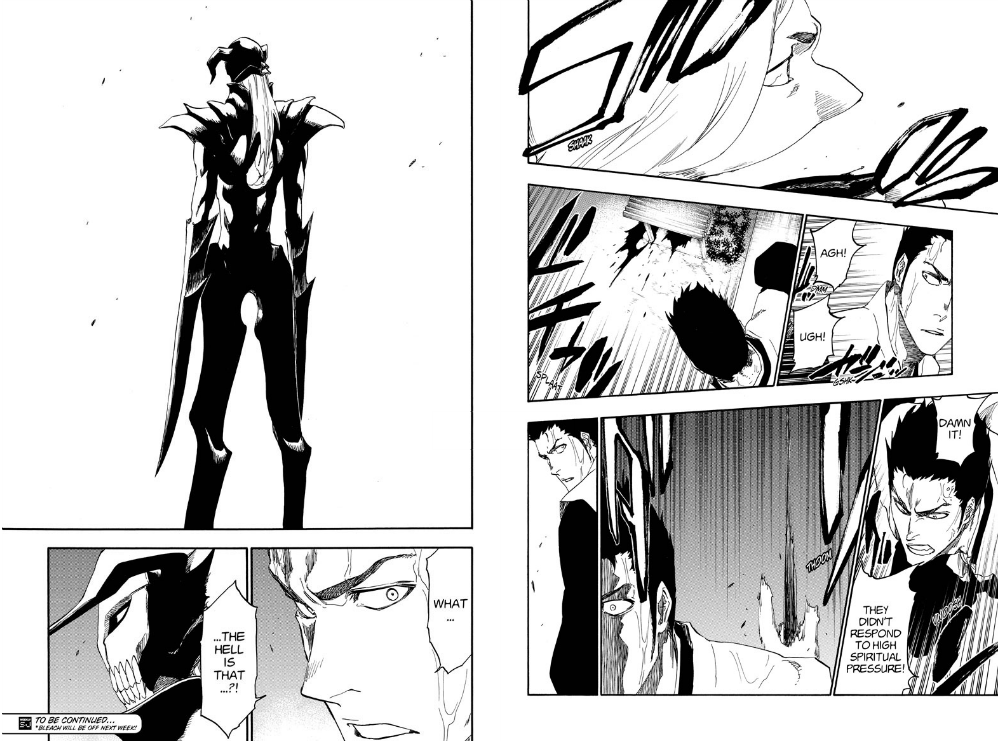 Cross Manage Ch. 025
After all the romance and relationship elements this manga has been throwing at us, I’ve started to refer to it as a shoujo manga in disguise. This was the first chapter in which a clear shounen element was introduced. Until this point, we’ve never really heard the characters flat out say how much they want to win. Seeing them confronted by an insurmountable opponent and having them decided to win no matter what is such a shounen element that I’m surprised it took so long to introduce into this series. Here’s hoping Cross Manage has a chance to keep moving forward. 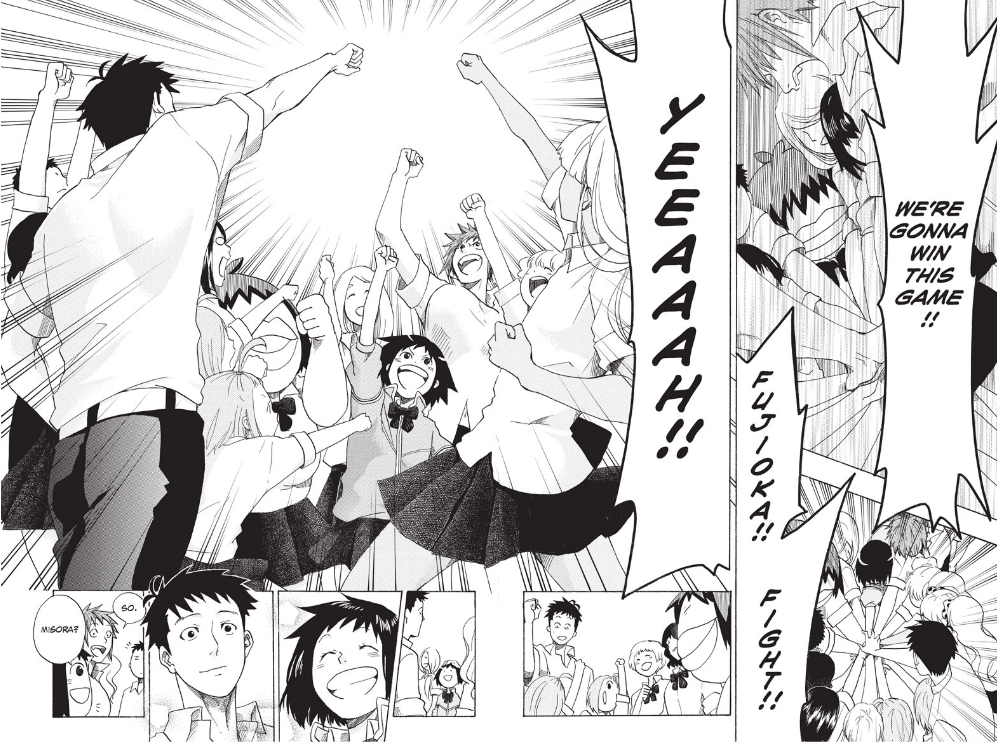 One-Punch Man Ch. 009
One-Punch Man‘s greatest charm is its refusal to play by the rules. When faced with the villain’s lair, do the heroes fight their way up from level one to the very top? Nope. They just blow the place away. Fortunately for the villains, the real complex is underground. Still, there is a sense of logic to the series. After all, if you have the power to demolish a building of bad guys, why not just do that, rather than bothering to fight your way through the complex? One-Punch Man is a satire not just of the superhero genre, but of shounen action adventure series in general. Granted it does make for shorter arcs, but we already know how each fight will end, so why not have some fun with the tropes of the genre? 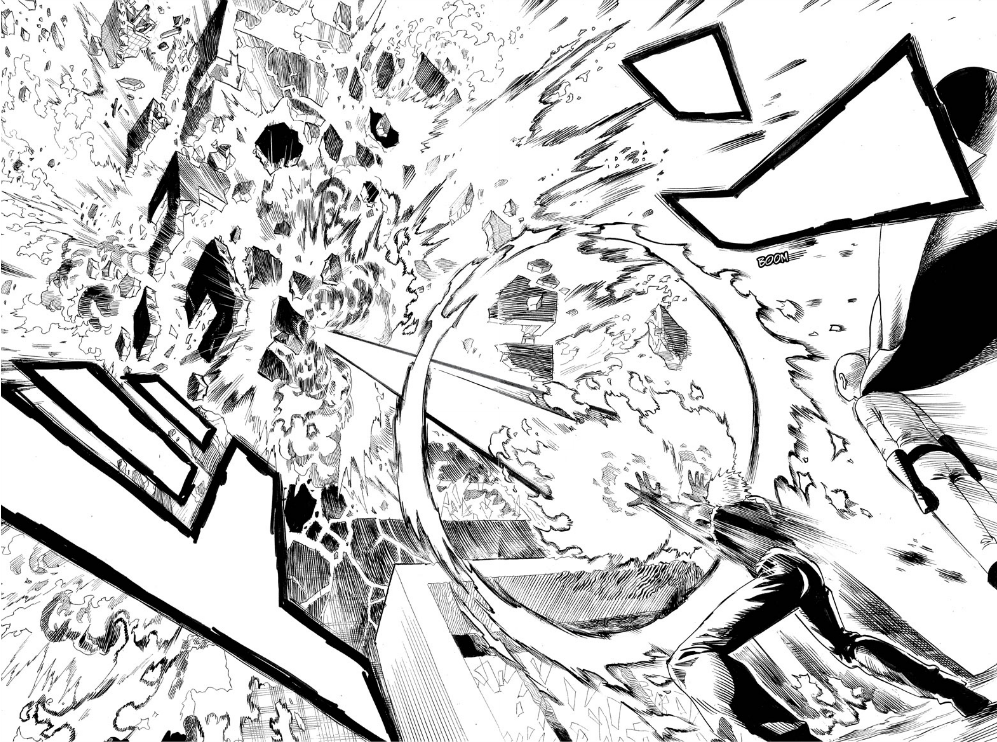 Dragon Ball Z Ch. 007
Quick question, was the Kamehameha ever shown in color in the original Dragon Ball manga? If yes, was it colored yellow? Did the anime get the color wrong by coloring it blue? It’s not like this would be the first time that an anime got the color scheme wrong. However, if it never was colored in the manga before, then why is it being colored yellow here? It may not seem like a big deal, but it’s such an arbitrary change, and I can’t see how anyone wouldn’t know what color the Kamehameha is meant to be. It’s only the most iconic attack of the series, and in every incarnation I’ve seen it in it’s been blue. And yet, somehow, they got the color of Picolo’s attack correct. Does anyone know who exactly has been coloring these chapters? Because either they made the silliest mistake in the world, or I’ve had it wrong this entire time. I’m going to stick with the colorist making a mistake until proven otherwise.

World Trigger Ch. 006
I liked this chapter. I can’t really put my finger on why exactly why I liked it more than other chapters (after the first one), but there’s just something about this week’s that works better. Perhaps it’s the interaction with the other Border characters. Perhaps it’s seeing Yuma lay the smack down on the pretentious Ai. Perhaps it’s Jun’s unexpected reaction. Perhaps it’s Yuma having to explain to Osamu that he, Osamu, was the one to save everyone (the only one who Yuma saved was Osamu, when the latter couldn’t protect himself). Either way, I’m looking forward to seeing whether this series continues to rise or starts the rapid descent into cancellation.

Nisekoi Ch. 066
Once again, Nisekoi manages to combine adorable and hilarious in the same neat package. The class finally have to switch seats, but because of the teacher’s relaxed attitude, they keep switching them over and over. Again, this is a chapter that needs to be read; it’s just too funny and adorable to explain without spoiling the experience. Just be warned, this chapter contains Shu’s crowning moment of the series. 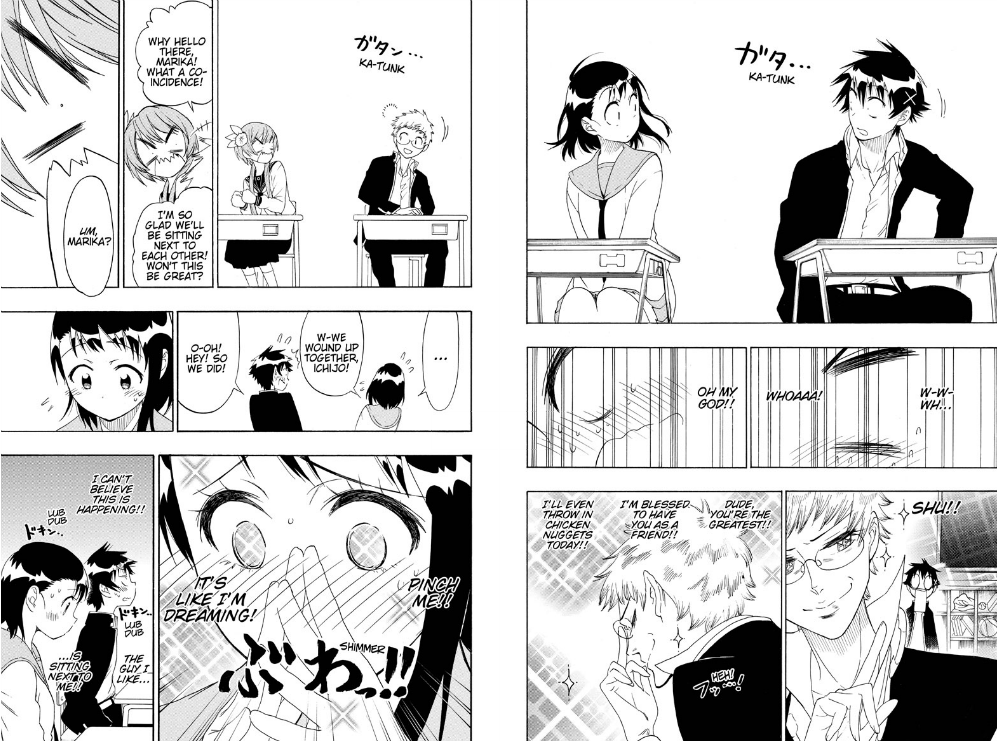 Which was your favorite chapter this week? Or are you holding out choosing until One Piece returns next week? Do you have any suggestions that would make this column better? We’ve been running this for a while, so I would love to get feedback for what I could be doing better.