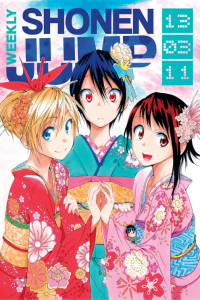 The one downside of Weekly Shonen Jump Online is that not everyone wants to play along. Tumblr has become a cesspool of spoilers for me. Even deviant art is dangerous ground to tread. But where in the past I didn’t care, because I was reading scanlations when they came out, now I find myself caring very much. Has anyone else been having trouble with spoilers, now that you’ve been waiting for the chapters to be officially released?

Also, would anyone like me to give each chapter a grade? I know people like grades when reading reviews, so I’ve been wondering if that’s something I should adopt for this column, or if it wouldn’t work well. Leave your answers in the comments if you please.

Nisekoi Ch. 065
All I have to say about this week’s chapter is, what did they do to Raku!? Someone please tell me, otherwise it’s going to be left up to my imagination, and my imagination is a dark, scary place!

Either way, this was a great chapter. As I’ve said, I love me some comedy, so the more comedic Nisekoi gets the happier I get. And a chapter focusing on all the girls in the series getting drunk off liquor candies? All the better. Reviewing comedy is a bit tricky, because my gut instinct is to tell you all about the jokes, but I can’t possibly do them any justice, so please, if you haven’t yet, go read this chapter. 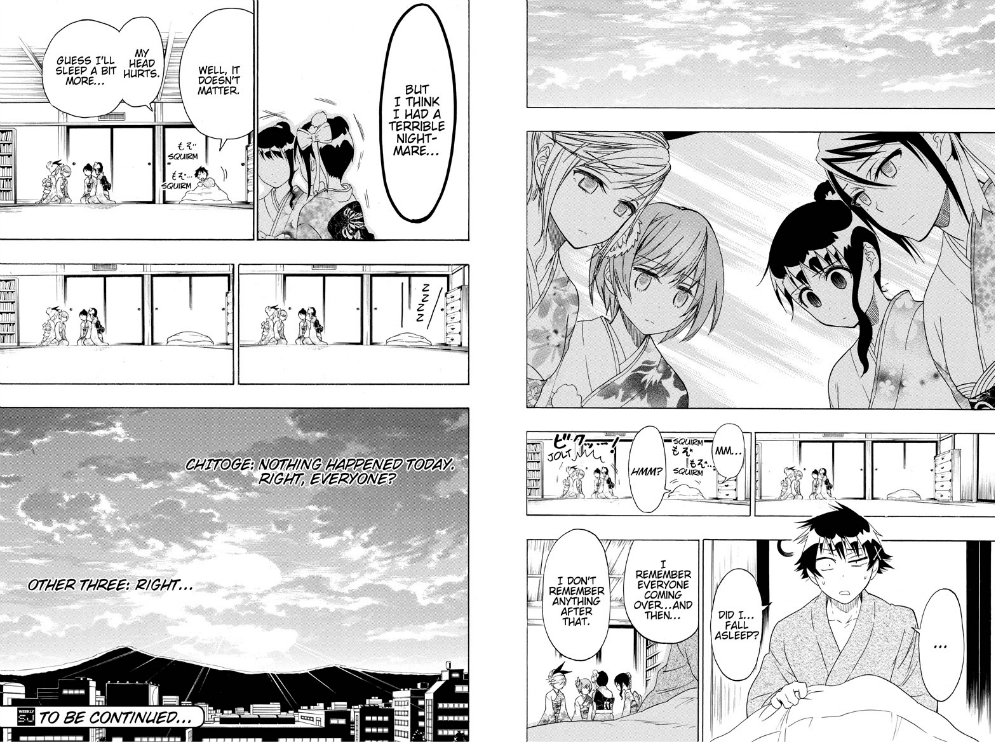 One Piece Ch. 701
Once again, every week I think to myself, “I should really give the number one spot this week to a different series. I ALWAYS give it to One Piece, people are going to start thinking I have inflexible taste.” And every week I read the chapter, and my first reaction is, “Well sonnuva…” I really, really don’t want anyone thinking I rate One Piece as high as I do just because it’s my favorite series, not because of the merits of the individual chapter. But when the individual chapters are just so good, what else can I do?

This week’s chapter is so good partly because we get our first look at Dressrosa, and partly because we get introduced to a character who was most likely first mentioned last week. Creative world building, well written comedy, and great action—this week has all of that, as One Piece usually does. If you aren’t reading this series yet, then you need to take the plunge and invest the necessary time to get caught up. It really is that good. 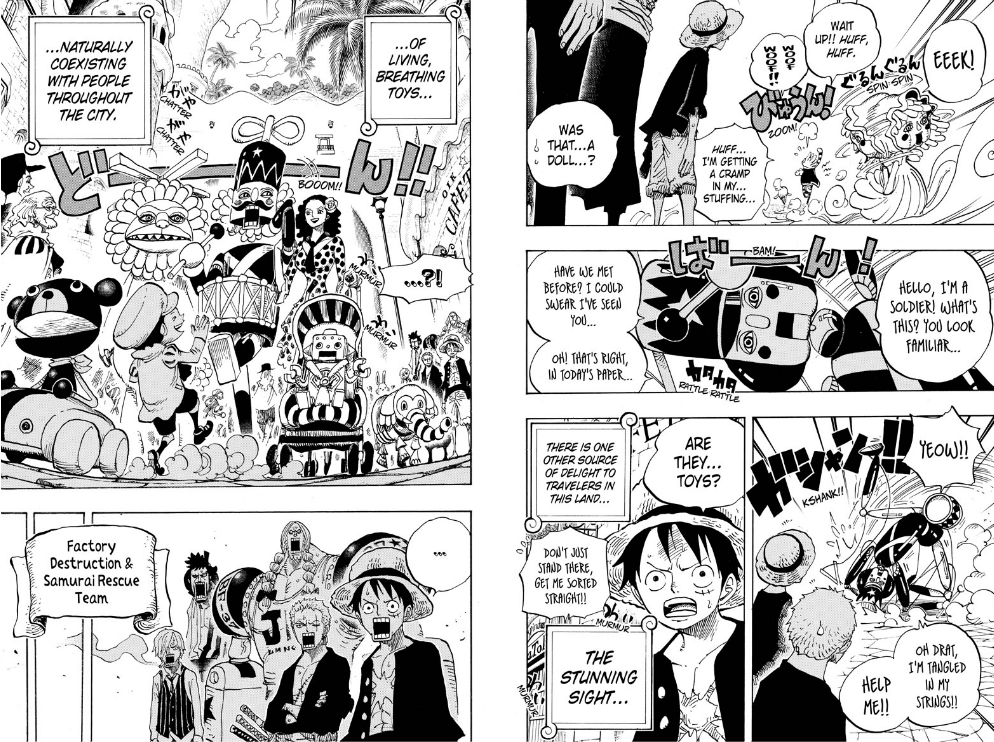 Naruto Ch. 623
I’ll say this about this week’s Naruto, it was better than last week. There was much less misplaced comedy and the confrontation begun at the end of this chapter looks like it will be a lot of fun, and was well set up. I’m finding myself enjoying this flashback a bit more, now that I’m a few weeks removed from remembering that it is awkwardly placed in the story as a whole. And I have to admit that I’ve been interested in this time period in Naruto history. So for now I’m looking forward to more.

Dragon Ball Z Ch. 006
The big problem with Dragon Ball Z, for this column at least, is that because of how action-intense it is there will be weeks where I find myself with nothing to say but, “Well, there was punching.” Though I suppose that might be more than could be said for some episodes of the anime.

In this case I find that the action was of course well executed and, unlike the anime which more people are familiar with, the fights actually move at a good pace. Rather than ending the chapter at a stalemate, Goku and Picolo are both injured, with only one chance to take down Raditz. In my own opinion this version of the story is the superior version, and any fan of Dragon Ball Z who hasn’t read the manga yet should be using this chance to become familiar with where it all started.

Cross Manage Ch. 024
It’s strange how Cross Manage has been embedding itself in my heart. I can’t think of any clear, specific reason for why I like it so much, but with every new chapter I find myself thinking that I would hate to see it go. Perhaps it’s the absurd humor, it might even be the surprisingly frequent fanservice, but whatever it is, it’s an entertaining read even if it has little to do with the titular sport.

Really it’s all about the character humor. In this case, Namine Chihara, is such an odd duck that I can’t figure out what her personality is meant to be. Either way, it’s entertaining. Currently she’s the closest thing to an antagonist we have, but she doesn’t seem like she is actually evil. Which of course works much better for the real world setting Cross Manage is going for, where antagonism is generally less about all out evil and more about people with opposing goals coming into contact with each other. I really liked this chapter, and hope that we get many more in the future. 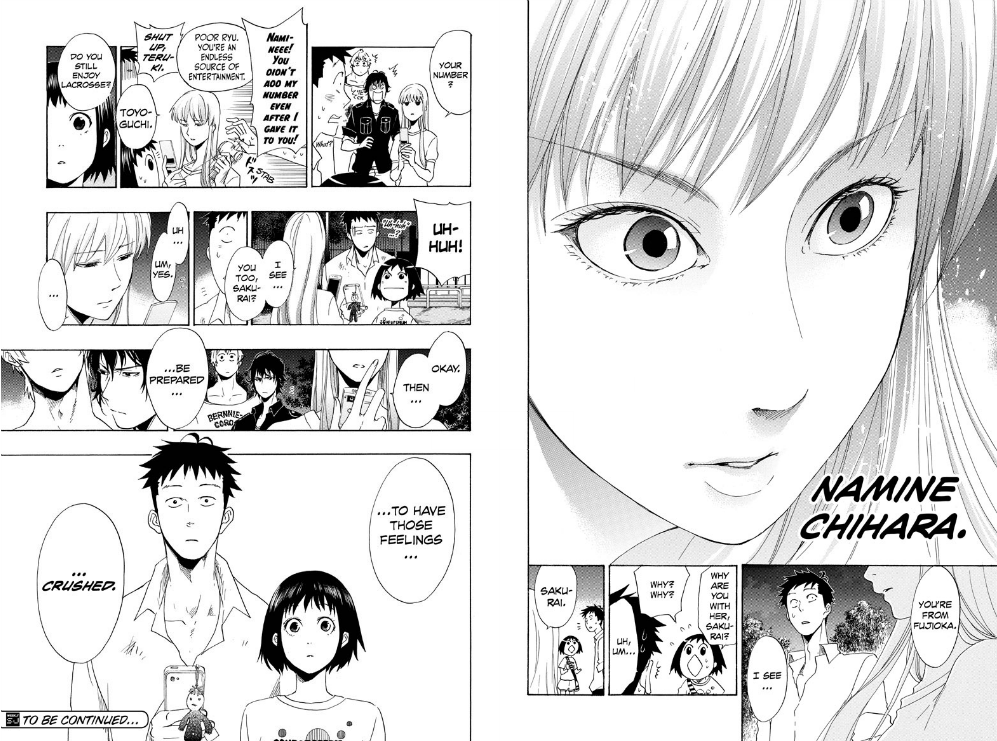 World Trigger Ch. 005
World Trigger, for its strong start, has been a bit lackluster these last four chapters. This week, however, we did get some answers about how the triggers work. But rather than have a character explain it, we pick up nuggets of information from Yuma behaving the way a proper character is supposed to. He doesn’t explain anything, but his dialogue still reveals important information. I can appreciate this level of writing, after reading many, many series where any and all exposition is imparted to the reader through clunky dialogue. I’m still wary about whether this series will go anywhere, but there is some real skill behind this writing. So we shall see.

One-Punch Man Ch. 008
If you want a quick explanation to share with people about what exactly One-Punch Man is, you’re welcome:

One-Punch Man is the story of a world where everyone is trying to have regular superhero fights, but one man refuses to play by the rules.

I had this revelation after seeing Saitama interact with more than just the villain of the week. And with the story eight chapters in, I think it’s safe to say that the one punch joke somehow just isn’t getting stale. I’ll let you find out for yourself why exactly, but the last page of this chapter was the funniest thing I read this entire issue.

Bleach Ch. 529
Ah, sweet, sweet answers. It’s been a while since I’ve been invested in Bleach. And while I refuse to ever get involved in the fandom again—once burned twice shy after all—I am slowly getting interested in the series again. After all, we’re finally getting Isshin’s story, something fans have been wanting forever. And so far it isn’t terribly written, so I think I can get properly invested. This chapter was nothing but answers. For one, we finally find out why Ichigo and Kaien were practically identical, and unlike the reveal of Ichigo’s mother, while there was a theory that Ichigo and Kaien were related, the reveal was handled properly this chapter, in that it didn’t act like the reveal was bigger than it was. So, kudos to Kubo.

Toriko Ch. 225
Ah, nothing like powerups out of nowhere. It takes a certain kind of clout to properly pull that off. And where before only One Piece was able to do that without annoying me, Toriko seems to be aiming for similar heights, because Sunny’s powerup may be out of nowhere, but it’s far too cool for me to care. 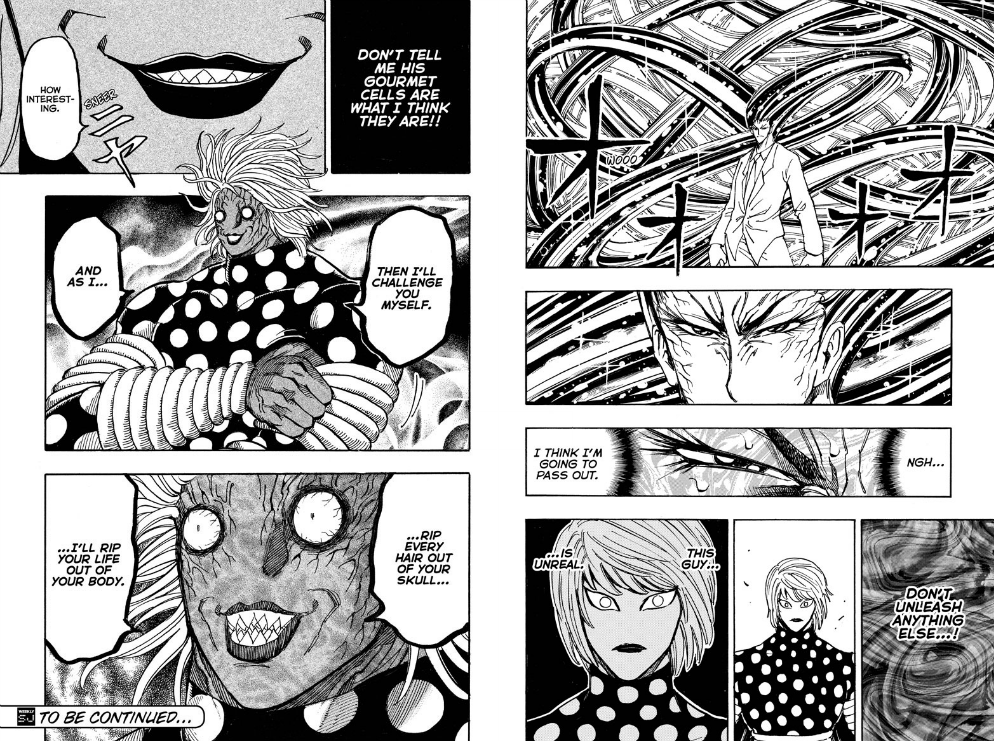 The majority of this chapter really was just Sunny and Tommyrod’s fight, but that was more than enough for me. I’m not sure exactly how using sensor attached to hair is meant to be culinarily themed, but I think I’ll give it a pass, just because it is unique from all the other methods of fighting this series provides. And the only way to keep multiple fights interesting is by having varied fighting styles. And Toriko never disappoints in that aspect.