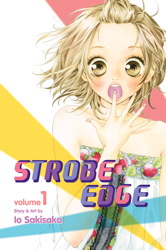 One of the most maddening aspects of shojo manga is that it can take 100 or 200 pages for a character to realize what she’s feeling, and another 200 or 300 before she actually tells someone; only the British period drama wrings more tension from its characters’ inability to say what they’re thinking. Strobe Edge, the newest addition to VIZ’s Shojo Beat imprint, isn’t quite as drawn out as Parade’s End or The Remains of the Day, but there are enough meaningful glances, lip quivers, and moist eyes for an entire BBC mini-series.

Strobe Edge focuses on Ninako, a classic shojo everygirl: she’s cute but not gorgeous, bright but not brilliant, liked but not popular. Through a twist of fate, Ninako meets and befriends Ren, her school’s Designated Dreamboat. Ninako is initially happy to be Ren’s pal, but soon finds herself consumed with thoughts about  him: should she tell him how she feels and risk alienating him, or silently resign herself to being his friend?

Author Io Sakisaka certainly evokes the mixture of excitement and fear that grips anyone in the throes of a crush, but she’s less successful at expressing those ideas in a distinctive voice; Ninako is so utterly lacking in personality that everything she thinks and says sounds like a lyric from a Selena Gomez song. (“For some reason, my chest kinda aches,” she muses after one encounter with Ren.) That same blandly polished quality extends to the artwork. Though Sakisaka exercises restraint in her layouts, giving Ninako room to breathe and reflect, her character designs are too ordinary to make much of an impression; I swear I’ve seen this cover before.

Perhaps that’s the point — Sakisaka has created a story and heroine so generic that almost any young teenager could see parallels between her own life and Ninako’s. While that kind of reading experience can be enormously comforting at twelve or thirteen, it’s awfully dull for older readers who need a little more than thousand-mile stares and cryptic conversations to hold our attention; a little subtext or, frankly, context, would make all that angstful withholding more dramatically compelling.

Review copy provided by VIZ Media. Volume one will arrive in stores on November 6, 2012.