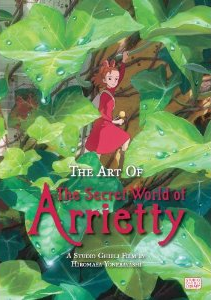 Among the many books I read and loved as a child, few left as indelible an impression as Mary Norton’s The Borrowers (1952). The book featured the Clocks, a family of mouse-sized people who lived, unseen, in the floorboards and walls of an old English house, stealing small objects and transforming them into furniture, cookware, and decorations. Norton’s rapturous descriptions of the Borrowers’ home so enchanted me that I still view thimbles and buttons not as human tools, but as tea-cozies and dinner plates for tiny folk.

The Borrowers made a similarly powerful impression on legendary animator Hayao Miyazaki, who saw in the Clocks’ resourceful gathering a metaphor for the way ordinary people were living through “chaotic, unsure times.” In 2007, he teamed up with Keiko Niwa to adapt Norton’s story into a screenplay. He then hired Hiromasa Yonebayashi to direct the film version, The Borrower Arrietty, which took nearly three years to complete. (N.B. For the North American release, the film has been re-titled The Secret World of Arrietty.)

Through concept sketches, movie stills, and interviews with Yonebayashi, The Art of The Secret World of Arrietty walks readers through the three-year process of making the movie. We see numerous sketches of Arrietty — sometimes as fierce warrior figure, other times as a round, soft-faced girl — as well as Miyazaki’s first sketches of the Clocks’ tiny home. In every chapter, these rough sketches are juxtaposed with finished images, allowing the reader to appreciate the important role that art directors Noboru Yoshida and Yoji Takeshige played in translating Miyazaki’s ideas into animated sequences. No where is this more evident than in their rendering of the Borrowers’ habitat: the rich color saturation, palpable textures, and intricate patterns make the Borrowers’ world seem utterly real.

Readers should note that the book covers the entire movie, revealing several important plot points. The book also reproduces the complete script — again, something that spoiler-phobes should consider in timing their purchase of The Art of The Secret World of Arrietty. (The film arrives in North American theaters on February 17.) For anyone who’s been impatient to see the film since it was first announced in 2009, or who read and loved Mary Norton’s novel, however, the lush, lovely images in Arrietty are the perfect “trailer” for this much-anticipated film. Recommended.

Review copy provided by VIZ Media LLC. The Art of The Secret World of Arrietty will be released on February 7, 2012.

THE ART OF THE SECRET WORLD OF ARRIETTY • BY HIROMASA YONEBAYASHI • VIZ MEDIA • 200 pp.