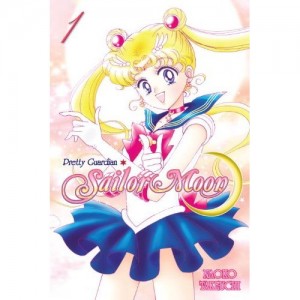 “I’m… the pretty guardian in a sailor suit! Guardian of love and justice! Sailor Moon!”

Working on a simple premise… (Follow my logic, would you?) If you took a squad of girls, magical powers, tokusatsu-style fighting, and a viciously unassuming story arc and threw them into a blender, what would you get? My-Hime, that’s what. But before My-Hime—before all that—there was Sailor Moon, an archetypal series that influenced the entire genre of magical girls within manga and anime. To this day, Fred Patten states that it introduced the idea of the magical girl team into the medium’s subconscious. The brainchild of artist Naoko Takeuchi, the sheer weight of its importance leans heavily on everything that came after it.

Simply put, the Great Ruler of the Dark Kingdom wants energy leeched from humans and the Legendary Silver Crystal that goes with it. With that, they can rule the world. All that stands between them and success is a small, black cat called Luna (who can talk and has a mark on her head in the shape of a crescent moon) and a team of fourteen-year-old girls who wear exaggerated versions of Japanese school sailor outfits and have magical powers, and whose code names are taken from the names of the planets in the solar system. Leading the team is a complete klutz named Usagi Tsukino who takes on the persona of Sailor Moon. Also into the mix goes Tuxedo Mask, a young man who dresses in a gentleman’s evening attire and wears (you guessed it) a mask. He likes to help Sailor Moon, but he has his own reasons as well. The girls are soldiers (or senshi) in a war against the enemies of love, truth and justice. And so the board is set, the players are moving, and the game can begin.

So why has it taken this long to write the review, seeing as I received the manga over two weeks ago? I think it’s the awe in which the series is held. Sailor Moon has a fanbase that rivals even Dragonball or Evangelion. Dragonball is an interesting title to compare, in terms of its Western audience. For the most part, the perception is that Dragonball found a large male audience and Sailor Moon, a large female audience. I say “perception” because market analysis can only tell you so much. But it’s unfair to label Sailor Moon as Dragonball for girls, as I once did. The two series are worlds apart in their execution, tone and setting. Yet, I cannot discount the idea that each gender can find something in both stories that resonates with them.

My failing was that I decided that girls could like Dragonball but boys couldn’t like Sailor Moon, because there was nothing there for them to latch onto. I think what set me on that foolish path was the God-awful treatment that Sailor Moon received at the hands of DIC Entertainment when the animated version of the story came to European English-speaking shores. DIC made it sound like the most girly of enterprises (something no self-respecting angsty teenager would be caught dead liking), where the girls were all airheads and the villains were dead simple. The show was never going to attract a boy who had grown up with He-Man. It was not going to happen for me. And so, I ignored it.

But the fanbase, as I’ve said, is relentless. Every time you look at cosplayers, someone is dressed as Sailor Moon. So I would speak with people who talked about the story as if it was manna from Heaven. They ranged from cosplayers who said the series was their gateway into anime, to those who had been reading the manga since the 1990s TOKYOPOP editions. Interestingly, the anime breaking into North America is credited by many as the event that destroyed the grip the male, 15-25 demographic had on driving anime sales in America since the 1980s. Today, the market leans more heavily toward female fans than male fans of anime, manga, and J-Culture, so it’s a testament to the series that it had and still has that effect on the fans.

Still, I’m confused about Sailor Moon. Mostly because I cannot figure out where Takeuchi is going with it in this first volume, or indeed if she’s got some kind of plan going even here in the opening act. On the surface, Usagi is a airhead more concerned with being a girly girl, hanging out with her friends, and playing video games at the local arcade than entertaining the notion that she should be doing anything to save the world. Even when she accepts being Sailor Moon, she still doesn’t want to be put into scary situations by Luna. It makes for a nice intro to the character for whom we will ostensibly be rooting for the next however many volumes. The spoken-diary entries that Usagi has are something to behold. She tells us every single time a new chapter starts who she is, where she is from, what recently happened, and what is happening now. I know that this is because of the fact that Sailor Moon was serialized in Nakayoshi Magazine—to keep new readers in the loop, Takeuchi wrote those in—but the aftereffect is that Usagi comes across as even more bubbly, and this is a good thing.

The tone of the fight that the Sailors are in and the opposition that the author sets is one of innocence that can only be derived from a teenager’s perspective. When I was 14, the people who had it in for me in school wanted to beat me up and throw water over me, but they didn’t want me dead. For all the Dark Kingdom’s mwah-ha-ha-ha and general evilness, I cannot take them seriously. They are defeated by a dunderhead every single time. Then the dunderhead gets her own team of crack commandos and the bad guys get trounced, again and again, by a bunch of fourteen-year-olds who only got their powers recently. Even when they are vanquished, the villains treat it like “Bah! Another setback!”

Some people would argue that Sailor Moon has a lot of evidence of plot conveniences for the sake of convenience; I counter the argument because the same evidence is rather exculpatory in nature. To explain, while I want to say that the whole “You are destined to become a team of magical fighting girls!” thing is a little too convenient, the truth is that’s how all good quest stories start and since I don’t really have a problem with them, I don’t have a really big problem with Sailor Moon doing it, either. So the girls are destined to be a team of superheroes not because they were destined to be so, but because Luna had been keeping an eye on all of them. The same can be said for the items that the senshi use to defeat the forces of darkness. Usagi, we have established, plays video games at the arcade. She gets prizes every time she gets a high score. These items look very suspicious and don’t look like the usual tat, if you get my meaning. However, throughout this smoke-and-mirrors routine I can see a kind of epic gathering of heroes (the girls being recruited) and figures of cruelty and infamy (Dark Kingdom’s minions) moving around and cannot wait to see what happens next.

Artwork-wise, I cannot say enough good things about it. From Usagi’s transformation sequence to Luna’s little interstitial at the start of one of the chapters telling us who’s in the team, its biographical details and any allies and enemies, the art is really sweet and genuine to look at. Graceful and elegant, it still has its quick thumbnail drawings of our heroes and heroines to speed us through a page. There are real examples in the pages that Takeuchi is using mise-en-scène* to build a colorful and coherent stage that her actors are moving around. The whirling fog that surrounds our heroes when the enemy has the upper hand or when the senshi reveal to the villain (and, by extension, the audience) their power and become light-filled are but two such examples. The moments of tranquility when Tuxedo Mask dances with and around Sailor Moon are wonderful. Even as a battle-hardened, knowledgeable young man of 30, I can understand the feeling of falling for someone and feeling like the whole world stopped for that moment. Takeuchi gives her leads a distinctive look and you’d never confuse one Sailor Senshi for another, even in their uniforms. Plus, she never makes the fact that they dress in sailor outfits into something crass. With the supporting cast it’s a little more difficult to keep an eye on who’s who but I don’t mind that so much at this point, as they don’t contribute much.

It’s interesting, both in terms of storytelling and, of course, artwork, to see the different types of girls who get recruited into being Sailor Senshi become staples of magical girl stereotypes. There’s the ditzy girl, the smart girl, and the girl who works at the shrine. I don’t doubt that I’ll see even more types emerge as the series goes on. While Sailor Moon didn’t invent these types for the most part, it perfected them. The chief bad guys are also designed this way: they have been around before but never in this context and setting. The more I reread this volume, the more I wonder if I’ve been wrong about a great number of shows and manga that I’ve passed by simply by having a prejudiced opinion. As an aside, the translation by William Flanagan is spot-on and I’m, as always, grateful for the liner notes at the back to make sense of the nuances within Japanese culture.

Ultimately, Sailor Moon works because you get swept up by the story. The idea of battling evil-doers over rooftops or in exotic locations with brave allies and with nothing more than the power you have inside of you is something we know from when we were little and read fairy tales. Later we dismiss such stories as mere whimsy. Usagi and her friends are living in a fairy tale and I can and will wholeheartedly continue to embrace this whimsy for as long as it lasts.

* Mise-en-scène is a French term which literally means “placing on stage” and refers to the art of placing elements (actors, props, sets, lighting) in front of the viewer in order to immerse them in the story. Where the actors are placed within a scene and how they move in the scene are also elements within mise-en-scène.