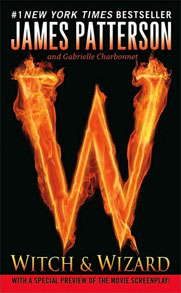 One minute Whit Allgood is falling asleep in front of the TV, the next an army is breaking down his door, brandishing guns and dragging his sister Wisty out of her bed. But the biggest shock for Whit and Wisty comes when they’re accused of being a wizard and a witch by the New Order—the all new government that’s taken over the whole country—and are sentenced to death. As they struggle to survive in their jail cell, the siblings discover that they do have special powers, from telekinesis to bursting into flames. Even after they manage to break out, thanks to the help of a ghostly friend, Whit and Wisty still have to find their parents, and they might have to break back into jail to do it.

Witch & Wizard is one of the latest series to come out of the James Patterson novel mill, this time written in conjunction with Gabrielle Charbonnet. Though there was already a graphic novel adaptation from IDW, Yen Press decided to come out with their own version of the dystopian novel using artist Svetlana Chmakova, creator of Dramacon and Night School, to create Witch & Wizard: The Manga. Both versions of the story have their flaws, but one might be more worth your time than the other.

Let’s start with the novel. One good thing you can immediately say about Witch & Wizard is that it gets right into the action. The story has barely started before the New Order troops are breaking down the Allgoods’ door. It doesn’t slow down much from there, even when the siblings are locked in prison, as they deal with sadistic jailers and have to fight a pack of mad dogs for food and water. The short chapters (most only last 1 or 2 pages) help create the illusion that you are speeding through the book. But even with all the rapid action, the story can get pretty clunky at times. You’ll start the next chapter, and suddenly Whit and Wisty are somewhere else, or there’s someone new in the scene who wasn’t there before. And the short chapters, while helping you feel like the book is a fast read, hurt the overall smoothness of the longer, more dramatic scenes.

Whit and Wisty are certainly fun characters, with their wisecracks, determination, and magical powers. Wisty in particular has an entertaining, sarcastic tone. But unfortunately, it’s all surface. Though the story is in first person for both characters, you never feel like you get truly, deeply in their heads. Even when the story pauses for inner thoughts it’s pretty generic, like how awful or cool or sad something is. Then there is the villain, The One Who Is The One, who should be dark and terrifying… but for some reason, Patterson and Charbonnet have him spouting some of the weirdest lines. They range from awkward – “I can even shut your sister up!” – to just plain goofy – “TRICKS ARE FOR KIDS!” – and really diminish the fear readers should have of this all-powerful villain. 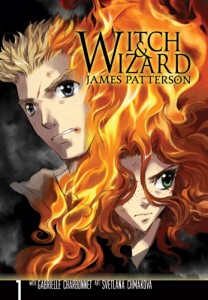 Now we come to Yen Press’s manga adaptation by Svetlana Chmakova. The visual aspect of the comic actually helps with the clunky-ness in the book. New character appearances are less sudden, and we see the transition from one place to another, so there’s no flipping back a page to see how Whit and Wisty suddenly got from point A to point B. Chmakova’s art also helps to brighten up some of the less-than-stellar character personalities. Sure, the villains are just as one-dimensional as in the novel, with their little dark beetle eyes, but other characters seem more human in her hands. Whit wears a blank look of shock when he discovers that Celia is a ghost, and Wisty’s range of expressions, from cartoonish excitement at living in a fancy department store to the dark, narrow-eyed look when she casts her angry spells, make this witch even more fun and exciting than her novel version.

Despite the pace of the original, cuts were needed to fit the whole story into a single graphic novel. We miss out on some interesting shows of magic, like when Wisty floats in her sleep, or Whit speeds himself up to handily defeat some guards. But the comic also does away with some bits I didn’t care for, most obviously The One’s horrible, cheesy lines. The One still isn’t as dark and foreboding as I would like (you can always go creepier) but at least his dialogue doesn’t make me cringe.

The Witch & Wizard novel has a lot of problems that I have a hard time overlooking. While the pacing is nice and quick, the novel persistently trips itself up with awkward breaks and sudden shifts in location. And the plot, while a decently done fight-the-power dystopian, can get repetitive, takes unnecessary turns, and ends so abruptly I’m honestly surprised Patterson and Charbonet didn’t add in a couple more chapters to smooth things out. Chmakova’s adaptation doesn’t escape the plot issues of the original, but in streamlining the plot to fit into a single graphic novel she manages to toss out some of the minor chinks, resulting in an easier flow. When you combine that with art that is much more expressive than Patterson’s prose, overall you get a more enjoyable read. It’s still not perfect, but Witch & Wizard the manga improves enough on the original to be worth your money.