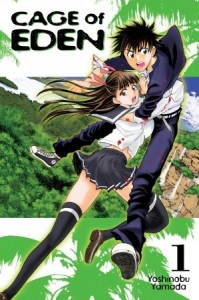 Stop me if you’ve heard this one before: a trans-Pacific flight encounters turbulence, and before any of the passengers can shout “J.J. Abrams!” — or “William Golding!” for that matter — the plane crash-lands an uninhabited tropical island, far from civilization’s reach. In some variations of the story, the island itself poses the greatest danger to survivors, harboring monsters or malevolent spirits. In other versions, the survivors’ own fear and narcissism proves more deadly than any jungle-dwelling creatures, as the rude wilderness strips away the survivors’ veneer of humanity.

In Cage of Eden, Yoshinobu Yamada combines these two survival narratives to tell the story of a high school holiday gone horribly wrong. Cage’s teen heroes crash-land in a prehistoric forest populated by long-extinct animals: saber-toothed tigers, horse-sized birds. These big, hungry predators aren’t the only threat to the students’ safety, however. Yarai, the class delinquent, seizes the opportunity to act on his darkest impulses, terrorizing his peers and the doomed flight’s captain. Only Akira, a small, self-described loser, and Mariya, a bespectacled, anti-social genius, have the skills and the smarts to outwit both enemies.

Though the story unfurls at a good clip, the execution is a little creaky. The opening chapter is a choppy information dump, as Yamada introduces the principal characters, delineates their relationships, and reveals the purpose of their plane trip. Once on the island, Mariya’s computer proves shockingly durable — it boots up without protest, despite plunging 35,000 feet — and helpfully equipped with a searchable database of extinct animals. (“Even without internet, I can still access program files,” Mariya solemnly informs an incredulous Akira.) The characters speak fluent exposition, frequently explaining things to one another that are readily obvious from Yamada’s crisply executed drawings. Worse still, the intelligent dialogue is reserved for the male characters; the few female characters’ primary role is to be menaced, rescued, and ogled, though not necessarily in that order.

However obvious the script or ubiquitous the cheesecake — and yes, the fanservice is executed with all the subtlety of a tap-dancing hippopotamus — Cage of Eden has a cheerful, B-movie vibe that’s hard to resist. The monsters are rendered in loving detail, down to their sinews and feathers and claws; as they tear across the page, it’s not hard to imagine how terrified the characters must be, or how fast they need to run in order to escape. The setting, too, is a boon, offering Yamada numerous places to conceal a dangerous animal or booby trap. Even the characters are effective. Though drawn in broad strokes, Akira is a sympathetic lead; he’s prone to self-doubt after years of being a bench warmer, an academic failure, a mama’s boy, and a second banana to the most popular student in his class. That the island provides him a chance to prove his worth isn’t surprising — that’s de rigeur for the genre — but Akira’s mixture of humility and bravery is refreshing, helping distract the reader from the absurdity of his action-movie heroics.

I won’t make any grand claims for Cage of Eden: on many levels, it’s dumber than a peroxide blonde, with characters doing and saying things that defy common sense. Yet Yoshinobu Yamada demonstrates a genuine flair for writing popcorn-movie manga, populating the island with scary-looking monsters and staging thrilling action sequences that temporarily erase the memory of the clumsy dialogue and panty shots. Cage of Eden is the perfect beach read for the final days of August: it’s fun and fast-paced, placing few demands on the sun-addled reader.