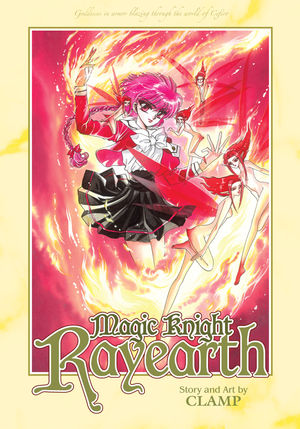 Shonen manga in drag — that’s my quick-and-dirty assessment of CLAMP’s Magic Knight Rayearth, a fantasy-adventure that adheres so closely to the friendship-effort-victory template that it’s easy to forget it ran in the pages of Nakayoshi. A closer examination reveals that Rayearth is, in fact, a complex, unique fusion of shojo and shonen storytelling practices.

If you missed Rayearth when it was first released by Tokyopop, the story goes something like this: three schoolgirls are summoned to defend the kingdom of Cefiro from the wicked priest Zagato, who’s imprisoned Cefiro’s regent, Princess Emeraude, in a watery dungeon. In order to rescue Emeraude, Fuu, Umi, and Hikaru must endure a series of trials that will reveal whether the girls are equal to the task. As the girls advance towards their goal of becoming Magic Knights, however, they begin to realize that Clef Guru, their guide and protector, has misrepresented the true nature of their assignment.

On a moment-to-moment basis, Rayearth reads like shojo. The girls bicker and complain about school; they chibify whenever they’re flustered or frustrated; they cluck and fuss over cute animals; and they share a collective swoon over the series’ one and only cute boy. (He makes a brief but memorable cameo early in the story, as the girls struggle to escape The Forest of Silence.) The girls’ fights, too, are tempered by shojo sentiment; “heart” and compassion play as important a role in defeating many of their enemies as strength and speed.

What sets Rayearth apart from so many other shojo fantasies, however, are the lengthy battle scenes. Fuu, Umi, and Hikaru prove just as adept at repelling surprise attacks and killing monsters as their shonen manga counterparts; though all three girls experience pangs of self-doubt, they show the same steely resolve in combat that Naruto, Ichigo, and InuYasha do. Equally striking is their fierce loyalty to one another; each girl is willing to sacrifice herself so that her friends might live to complete their mission. Though shojo manga can and does stress the importance of female friendship, Rayearth places unusual emphasis on the girls’ shared sense of purpose and commitment to one another. From the very earliest pages of the story, Fuu, Umi, and Hikaru characterize their bond as “sisterhood,” and believe that their love for one another is crucial to their success — a belief that’s systematically tested and proven throughout their journey.

And if you need further proof of Rayearth‘s shonen manga influence, look no further than the Mashins, a trio of anthropomorphic battle robots that Fuu, Umi, and Hikaru awaken in their quest to become Magic Knights. The Mashin are towering, sleek, and lupine, reminiscent of Yoshiyuki Tamino’s iconic mecha designs. Most importantly, the Mashin are fundamental to the story; they’re not an afterthought, but an essential element of the third act, providing the girls with the firepower necessary to combat Zagato.

Yet for all its shonen swagger, Rayearth has some of the most graceful, feminine artwork in the CLAMP canon. The girls’ physical transformations have the same sensual quality as Bernini’s The Ecstasy of St. Theresa, while their magical spells are depicted as undulating waves of energy that envelop their enemies, rather than jagged bolts of light that pierce and slice. Even small, seemingly inconsequential details — Princess Emeraude’s hair, Zagato’s robes — are infused with this same graceful sensibility — the visual antithesis of the spiky, angular aesthetic that prevails in shonen manga.

I only wish Rayearth was as satisfying to read as it is to critique. For all its genre-bending bravado, the script is so painfully earnest that it verges on self-parody. (Sample: “In Cefiro, the heart controls everything. The power of my belief can change the future!”) The girls, too, lack distinctive personalities. Fuu, Umi, and Hikaru are defined primarily by their magical powers and hairstyles, with only superficial differences in behavior and attitude to help readers distinguish them from one another. Perhaps most disappointing is the conclusion, in which we finally grasp the true cause of Emeraude’s imprisonment. For a brief moment, Emeraude seems poised to break free of an onerous responsibility that demands her complete self-abnegation to fulfill. Yet CLAMP’s desire for a dramatic ending demands that Emeraude be punished for even desiring her freedom, making Emeraude the umpteenth female character to be taken out to the woodshed for resisting such a fate.

That said, Magic Knight Rayearth‘s historical importance can’t be denied. Not only was it CLAMP’s first big commercial hit, it was also the title that demonstrated just how effortlessly they could cross genre boundaries. The resulting hybrid of shonen and shojo, sci-fi and fantasy, RPG and classic adventure story is as unique today as it was when it first appeared in the pages of Nakayoshi eighteen years ago, even if some of the visual details and dialogue haven’t aged well. Recommended.