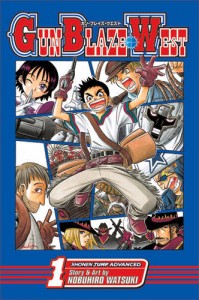 Let me begin this review with a disclaimer: Ken Burns would not approve of the historical liberties taken by Gun Blaze West creator Nobuhiro Watsuki. The dialogue, for example: the characters speak in a distinctly modern patois, filled with phrases never uttered by Sitting Bull or General Custer. The scenery, for another: verdant Eastern forests abut rugged desert canyons, even though the story begins in Illinois. (I particularly liked Watsuki’s rendering of Saint Louis as a kind of Budapest on the Mississippi, complete with majestic buildings.) Even the saloon names feel a little off-kilter, as one group of outlaws patronize a joint called Bella Donna. Such incongruities may offend Mr. Burns, but they’re just part of this boisterous series’ charm. (Did I mention the knife-throwing samurai girl? Oh, Mr. Burns, the horror!)

Gun Blaze West focuses on Viu Bannes, a ten-year-old boy who dreams of visiting Gun Blaze West, a mythical city populated by the world’s greatest gunslingers. (On the map, it appears to be located in Seattle, making me wonder if Gun Blaze West is, in fact, populated by the West’s most caffeinated gunslingers.) When a down-on-his-luck cowboy wanders into town, Viu pesters him for shooting lessons. Marcus reluctantly agrees to show Viu the gunslinging ropes, but before Viu can complete his training, the notorious Kenbrown gang arrives in Winston Town, terrorizing the citizens and threatening Viu’s older sister. Viu and Marcus’s standoff with the Kenbrown gang ends with an unexpected turn of events — one that sets the stage for Viu’s subsequent cross-country odyssey.

As in many shonen adventure series, the hero is the least interesting member of the cast. Viu seems to have been ordered straight from the SJ catalog: he’s fast, strong, and so single-minded in pursuit of his dreams that he often comes across as stupid. He also spends a lot of time declaring that he’ll “do his best” and extolling the value of friendship — two other perennial Shonen Jump themes.

In spite of the numerous capitulations to formula, however, Gun Blaze West is one of the most enjoyable shonen titles that VIZ has published. The Western setting proves a welcome change of pace from feudal Japan, modern-day Tokyo, and fantasy realms where teens go mano-a-mano with demons and undead souls. Though the characters possess exaggerated skill and strength, there’s nothing supernatural about Viu and his friends; they come by their talents honestly, through practice, hard work, and mistakes. The story, too, proves surprisingly adult at times, exploring the consequences of violence and rash behavior more realistically than many titles in the Shonen Jump canon.

What really makes Gun Blaze West tick, however, is its playful intermingling of shonen and Western tropes. Gun Blaze West actually feels like a Western, minus some of the obvious anachronisms and geographical gaffes. Marcus is a classic oater type, the gunslinger who’s developed a strong distaste for violence; he’s reluctant to participate in a shoot-out of any kind, adopting a foolish persona to camouflage his skill. When the bullets start flying — and there several lengthy gun battles sprinkled throughout the series — the tone shifts dramatically to underscore Marcus’ abhorrence of fighting. The supporting cast, too, is filled with familiar Wild West archetypes: salty saloon keepers, feisty young women, straight-arrow lawmen, sadistic villains, and traveling circus performers. Even the plots stick closely to the John Ford playbook, whether a small town is under siege from criminals or a local business owner is being harassed by a rival’s private army of thugs.

If you’re a fan of Buso Renkin or Rurouni Kenshin, you know what to expect from Watsuki’s art: dynamic fight scenes, villains with memorable mugs, and nonstop sight gags. The art’s relentless, antic quality wears a little thin towards the end of the series; I found myself wishing that Watsuki would pause to savor the landscape or linger at the sight of a lonely gunslinger’s tombstone instead of uncorking another fart joke or chase scene. Yet for all the artwork’s implied dynamism, the images themselves are never too busy; like Eiichiro Oda and Akira Toriyama, Watsuki relies primarily on lines and evocative shapes to convey the physicality of the people and objects in his stories, rather than heavy patches of screentone. Watsuki isn’t quite Oda or Toriyama’s peer when it comes to backgrounds and peripheral characters — his repertory of towns and bit players is more limited — but his pages exude the same boisterous energy as theirs do.

Best of all, Gun Blaze West is short, clocking in at just three volumes. Given how many shonen titles overstay their welcome with repetitive, drawn-out story arcs, that kind of brevity is admirable; that Gun Blaze West finishes on a high note makes its brevity seem like a stroke of creative genius.

This is an expanded version of a review that originally appeared at PopCultureShock on 3/31/08.