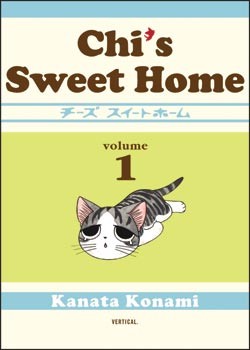 Come for the cat, stay for the cartooning — that’s how I’d summarize the appeal of Chi’s Sweet Home, a deceptively simple story about a family that adopts a wayward kitten. Chi certainly works as an all-ages comic, as the clean, simple layouts do a good job of telling the story, even without the addition of dialogue or voice-overs. But Chi is more than just cute kitty antics; it’s a thoughtful reflection on the joys and difficulties of pet ownership, one that invites readers of all ages to see the world through their cat or dog’s eyes and imagine how an animal adapts to life among humans.

Though Kanata Konami accomplishes some of this by revealing Chi’s thoughts in the form of a simple monologue, delivered — or should that be “dewivered”? — in a child-like voice, it’s the artwork that really drives home the point that Chi is bewildered and intrigued by her new environment. Early in the volume, for example, the newly-rescued Chi awakes in a panicked state: she doesn’t know where she is, and she’s desperate to find her mother. Konami first gives us an overhead view of the living room, tracing Chi’s frantic attempt to find the door, then cuts to a panel of Chi trapped against a wall, two pieces of furniture looming over her. Konami employs a similar tactic when Mr. Yamada takes Chi to the veterinarian for her first check-up, again using an overhead shot of the waiting room to establish the human scale of the space before offering a cat’s eye perspective; as Chi sees things, the vet’s office is filled with enormous, Godzilla-sized dogs who seemed poised to eat her. In both sequences, the quick shift in perspective gives the reader a clear sense of Chi’s disorientation by reminding us how small she is, and how alien the environment seems to her.

The other secret to Konami’s success are her character designs. Though Chi is clearly a cat, Konami draws her face as a round, moon-like shape with two enormous eyes — if anything, Chi resembles the heroine of Kiyohiko Azuma’s Yotsuba&! more than, say, Neko Ramen‘s cat cook or Cat Paradise‘s feline warriors. Like Azuma, Konami demonstrates that it’s possible to contort and bend these simple, circular shapes into an enormous range of expressions, from wide-eyed wonder to fear, sadness, and, for want of a better term, hunterly attentiveness. (Chi considers all of her cat toys a form of prey.) Even the very youngest reader will immediately understand how Chi is feeling, even if he isn’t able to parse the accompanying text or make sense of other imagery. (To wit: there’s a marvelous, trippy dream sequence in which Chi is pursued by what could best be described as a canine matryoshka, a chain of barking dogs, each a smaller imitation of the one before it. I don’t know what a four-year-old would make of it, but Chi’s reaction is priceless.)

Given the strength of Konami’s artwork, I would have liked Chi’s Sweet Home even better without the voice-overs. Most of Chi’s comments seem obvious — cats usually fear dogs and vets — or deliberately calculated to tug at the heartstrings. Interior monologues of this kind are generally more effective when they ascribe uniquely human sentiments to an animal: think of Snoopy’s Walter Mitty-esque fascination with the Red Baron, or Garfield’s contempt for Jon Arbuckle, which stems less from a general disdain of humans and more from Garfield’s embarrassment that his owner is a loser. Chi’s voice-overs aren’t a deal-breaker by any means; at times, they prove quite effective, especially in illustrating Chi’s gradual transference of affection from her feline mother to her human family. Moreover, Konami wisely avoids putting words into Chi’s mouth that suggest an unnatural awareness of human behavior or language, allowing Chi to remain completely oblivious to the Yamadas’ numerous attempts to find her a new home. (Their apartment complex doesn’t allow pets.)

If you’re the kind of person who unironically refers to children and housepets as “social parasites,” Chi’s Sweet Home is not the manga for you. But if you’re ever lived with a cat or a dog or any other animal whose companionship you enjoyed, then you’ll find a lot to like about Chi, from its frank treatment of housebreaking and separation anxiety to the numerous scenes of Chi exploring her surroundings, transforming ordinary household items into “prey.” You don’t need to be a manga lover, either, to find Chi’s Sweet Home accessible; the simple artwork and flipped layout (Chi reads left to right, like an English-language book) make this a great place for newbies to begin their exploration of the medium. Highly recommended for readers of all ages.

Volume one will be released on June 29, 2010. Review copy provided by Vertical, Inc.