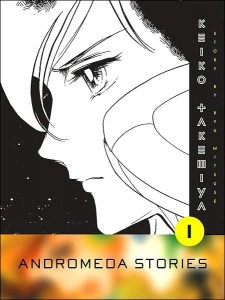 Ah, Keiko Takemiya, how I love your sci-fi extravaganzas! The psychic twins. The giant spiderbots. The evil, omniscient computers. The sand dragons. The fantastic hairdos. Just think how much more entertaining The Matrix might have been if you’d been at the helm instead of the dour, self-indulgent Wachowski Brothers! But wait… you did create your very own version of The Matrix: Andromeda Stories. Your version may not be as slickly presented as the Wachowski Brothers’, but you and collaborator Ryu Mitsuse engage the mind and heart with your tragic tale of doomed love, lost siblings, and machines so insidious that they’ll remake anything in their image—including the fish.

But I’m getting ahead of myself.

Mitsuse and Takemiya invert the normal order of events in a classical drama and begin Andromeda Stories with a wedding. A royal wedding, to be exact, forging an alliance between Cosmoralia and Ayoyoda, two kingdoms on the planet Astria. On the eve of the ceremony, newlyweds Prince Ithaca and Princess Lilia spot a mysterious blue star pulsating in the night sky. Shortly after the star’s appearance, a meteorite crashes through Astria’s atmosphere with a deadly cargo: an army of nanobots seeking human hosts. Only Il, a fierce female warrior, and Prince Milan, Lilia’s devoted brother, realize that these cyber-critters are rapidly transforming Cosmoralia’s population into a Borg-like race of automatons. Il and Milan set out to liberate Cosmoralia from the grips of this cyber-invasion force before the contagion of violence and fear spreads to Ayoyoda.

As Il soon discovers, there’s a small resistance movement led by the Murat, an alien race who lost their homeworld to the same invading force eight generations earlier. The survivors settled on Astria and married into Ayoyoda’s royal family with the goal of preventing the Astrians from becoming technologically sophisticated enough to attract the nanobots’ attention — and if that effort failed, doing whatever they could to defeat the machines. The Murat’s secret weapon against the nanobots: Jimsa and Affle, twins born to Princess Lilia and kept apart for over twelve years to escape detection by the new regime. Jimsa and Affle both possess the power to kill with a thought, a power amplified when the two fight side by side. Of course, there’s a drawback to so much empathetic energy: if one is injured, the other feels his pain, just like the Corsican Brothers. Then, too, there’s that pesky issue of trust: will Jimsa and Affle ever see themselves as sibilings, or have their separate upbringings driven a permanent wedge between them, thus thwarting the Murats’ hope?

In other words, it’s Star Trek by way of Anne McCaffrey, with a dash of Wagner and a little Arthur C. Clarke for good measure.

One of the things I love most about Takemiya’s work is the way she freely commingles sci-fi and fantasy elements in an effort to suggest the setting: a long time ago, in a galaxy far away. Her characters carry swords and wear togas, and live in castles with turrets, yet employ the kind of gadgetry—mind-reading computers, laser guns—that wouldn’t be out of place on the Death Star. Art-wise, the spirit of Osamu Tezuka lingers over many pages in Andromeda Stories, especially in its busier scenes. The Cosmoralian marketplace, for example, comes alive thanks to Takemiya’s vivid caricatures of merchants, wrestlers, farmers, dancing girls, snakes, and sloe-eyed dinosaurs, while many of the full-page cityscapes suggest the future worlds of Phoenix (especially the volumes from the 1970s, such as “Resurrection” and “Nostalgia”) and Apollo’s Song, with their abundant towers and tubular skywalks. Though Takemiya’s principal characters clearly belong to the world of 1970s shojo with their flowing manes, gypsy outfits, and sparkling eyes, some of her supporting characters — especially Balga, a Bluto-esque bodyguard — look like refugees from Buddha or Dororo. (In a sly nod to the kind of anachronistic humor that Tezuka loved, Takemiya depicts Balga playing with a Rubix’s cube while standing watch outside Princess Lilia’s chambers. 1980, you are so busted!)

Takemiya also demonstrates a Tezukian flair for staging short, effective action sequences that make creative use of panel shapes to convey movement, speed, and distance. Midway through volume one, for example, Il leaps through the canopy of a forest in an effort to investigate a mysterious crater not far outside the Cosmoralian walls: 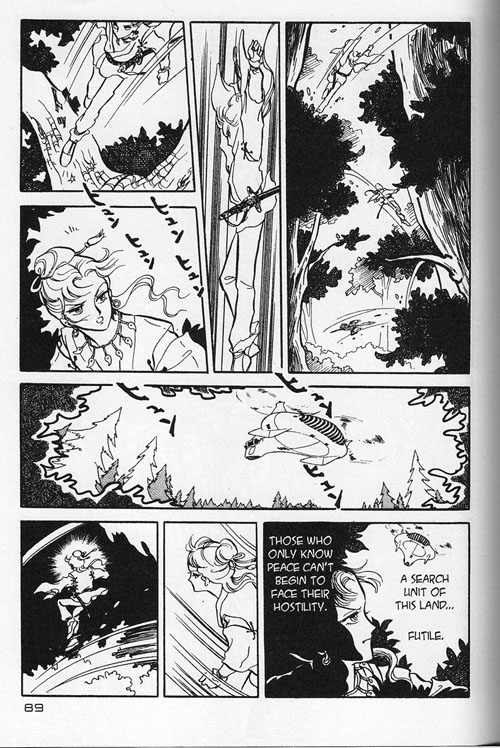 In just four panels, we can gauge how far she’s traveled and how high off the ground she is — a point underscored by the tapered edge of the top row’s middle panel. The diagonal border amplifies the effect of the vertical speedlines, drawing the eye downwards in an rapid fashion that mimicks Il’s motion. As Derik Badman observes in a concise analysis of this same page, Takemiya uses a number of tricks — drawing two iterations of the same character in one panel, using panel shape to direct the reader’s eye through the sequence, allowing sound effects to bleed outside the panels — to help us trace Il’s path through the tree tops, showing us, in compressed form, how many jumps it takes for her to reach a secure perch. It’s a technique that Tezuka perfected in works like MW, Ode to Kirihito, and Swallowing the Earth, where he gooses very basic components of the layout — especially panel shapes — to evoke the speed and energy of, say, a sword fight or a car chase.

At times, the richness of Takemiya’s visual imagination camouflages the more pedestrian aspects of the story, such as its one-dimensional principals. Lilia, in particular, is the kind of beautiful, virtuous, and long-suffering creature that seems to exist only in old-school Disney movies, while Il is a classic lone wolf, answering to no one, even when it might benefit her cause; the only real novelty here is that Mitsuse and Takemiya assign a stereotypically male role to a female character. The plot is simpler and more transparently allegorical than To Terra‘s, touching on a variety of standard science fiction themes, from the dangers of relegating too much responsibility to machines to the evils of totalitarianism. None of these themes are developed with the same level of sophistication as they are in To Terra, as the characters are generally too busy dodging death rays and mechanized piranha to wax poetic about their inner lives.

If Andromeda Stories never reaches the grand, operatic heights of To Terra, it nonetheless proves entertaining, building steady momentum over its 600+ page run, pausing occasionally to meditate on the nature of free will, creation, and individual responsibility. And c’mon… what’s not to like about a manga that looks like a 1979 cover of Heavy Metal magazine?!

This review is a synthesis of two shorter reviews that originally appeared at PopCultureShock on 10/3/07 and 1/31/08, respectively.