We are now three days in to Girls Only Week here at There it is, Plain as Daylight! Today I review Mikase Hayashi’s March on Earth, a sweet two-volume series about a young teen raising her nephew alone after her older sister’s death. Don’t forget to check out this week’s earlier reviews, for volume six of Peach-Pit’s emotionally rich magical girl series Shugo Chara! and volume two of Yun Kouga’s shonen fantasy series Gestalt!

March on Earth, Vols. 1 & 2
By Mikase Hayashi
Published by CMX 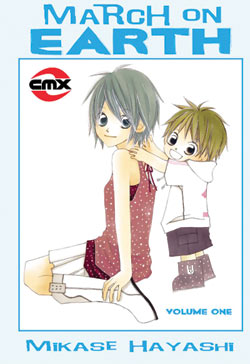 When Yuzu’s parents died, it was up to her older sister to take care of her. Now that her sister has been killed in a car crash, only Yuzu is left to care for her sister’s two-year-old son, Shou. Determined to do for her sister’s young son what her sister did for her, Yuzu takes on this responsibility with her whole heart. Fortunately, she’s got a kind landlady with two sons, each of whom dotes on Yuzu and Shou (particularly the older son, Seita, who harbors a not-so-secret crush on Yuzu) so she is far from alone, no matter how bleak things might seem to Yuzu in the loneliness of night. Over the course of the story, Yuzu pieces together a family for herself and Shou, first with the discovery of the man who is Shou’s father and finally including the family who already loves her, regardless of the lack of blood relation. She also faces questions about her own future and whether or not her own dreams can exist alongside her commitment to Shou.

This two-volume series is alternately awkward and touching, suffering structurally on one major point yet delivering considerable emotional resonance. The structural issue is likely due to circumstances surrounding the manga’s original serialization and thus unavoidable, though it is truly unfortunate. Each chapter recaps the tragic fate of Yuzu’s sister, Tsubaki, later adding in multiple retellings of the children’s book Tsubaki finished just before her death which is incredibly touching (it is about an older sister who realizes she is able to live on because of the love of her younger sister) or more to the point, it is touching the first time it is introduced. Sadly after three or four reiterations, it becomes simply tiresome, robbing it of its initial emotional effect. This may seem like a minor quibble but in such a short series, to have this much repetition really damages the effectiveness of the storytelling.

Narrative awkwardness aside, March on Earth is genuinely moving throughout. Though it may be too unabashedly sentimental for some readers, I found myself very thoroughly caught up in the quiet, earnest lives of these characters by the end, mainly thanks to Hayashi’s delicate touch. Yuzu is a common shojo heroine in all her cheerful fortitude, but what is refreshing about her is that the trials and obstacles she faces day-to-day are far greater than the average shojo romance and high school drama. She’s worried about keeping up with her schoolwork, but even more about whether or not her money will hold out until the end of the month, whether a social worker will try to separate her from Shou, and whether she’s really being as close to a mom as she can to him. Though these issues could easily take on an “afterschool special” sort of feel, the writing is so nuanced that this rarely happens. Even Yuzu’s smaller concerns are handled quite deftly, like her heartbreak over not being able to afford the toy Shou wants for Christmas, which is played with exactly the right amount of sadness and anxiety, no more, no less.

One character who is especially touching is Yuzu’s would-be love interest, Seita. Seita is not exceptionally smart or good-looking, nor does he have any obvious special talents. He is, however, sturdy (both in body and heart), steadfast, and unfailingly kind, and as the story goes on, it is impossible not to root for him to succeed in wooing Yuzu, for whom he obviously cares deeply. “Rely on me more!” he pleads constantly, and what makes this so endearing instead of irritating is that he actually is reliable. He’s not only offering from the heart, but he’s actually fully equipped to follow through. He is warm, open, and not even slightly embarrassed by his own feelings, which is very refreshing in a male character of his age. Romance is barely a factor in this manga and Seita’s relationship with Yuzu grows very slowly, never reaching any definitive conclusion, yet it is one of the sweetest and most real relationships I’ve encountered in shojo manga so far.

Hayashi’s art has a wispy, sparse feel, similar to that of Yuki Obata (We Were There) though considerably less striking. She is also overly fond of those bits of tiny, indecipherable side dialogue that tend to drive me mad, and her character designs tend to be so similar, it is difficult at times to tell people apart. Still, the manga has a nice flow to it and some scenes are strikingly poignant from a visual standpoint, such as a scene between Yuzu and Seita late in the story where they are sharing the seat of a parked bicycle, facing away from each other, but shoulder-to-shoulder. It is a simple but breathtaking scene, made so mainly by the strength of the visual storytelling.

Though March on Earth is not a perfect manga by any means, its quiet delicacy creates an unusually touching short series, both satisfying and sweet.