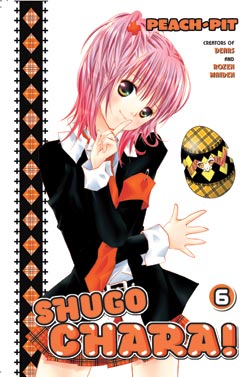 As volume six opens, Kairi is becoming more troubled over his role as Easter’s spy within the Guardians and especially his mission to distribute the “Wishing CD” to students at Seiyo Academy. Rima is struggling as well, both with her parents’ constant fighting and their overprotective behavior, particularly their insistence that she quit the Guardians. It doesn’t take long for either of these issues to be resolved, for better or worse. Meanwhile, Amu faces demons of her own as she finds herself once again forced into battling teen pop idol Utau (still working as a puppet for the evil corporation, Easter) who is now character transforming with Amu’s wayward guardian character, Diamond. Winding up to a final battle involving all the Guardians, Utau, and Ikuto, several new character transformations, and at least one unexpected guest, you’d think that was enough for one volume, but there is yet another surprise in store for Amu by the end.

Let me be perfectly up-front from the beginning. I love Shugo Chara! It is one of my very favorite series for younger girls and a great example of the way a talented team like Peach-Pit can take all the trappings of a standard shojo formula (in this case, the “magical girl” genre) and use it to tell a rich, thoughtful story that successfully explores the dreams and fears of children and adults alike. Its core concept–that all children have a “Heart’s Egg” that holds the potential for their most personal dreams–is honestly adorable, but more than that, it allows the story to delve into questions of desire, ability, hope, hopelessness, insecurity, self-awareness, and even gender identification (yes, really) as the series goes on. Its heroine, Amu, whose outward persona and inward personality are constantly at odds, begins the story by making a heartfelt wish to find “the courage to be reborn as the person I want to be.” Her wish brings her heart’s egg into the world to hatch as a shugo chara (guardian character)–a tiny, human-like representation of her would-be self. Where the story gets brilliant, however, is that Amu ends up giving “birth” to four different guardian characters over the course of these six volumes, representing all the many aspects of who she might be, making it clear that there is no one future self for any of us–but rather a wide array of potential selves, any of whom we may become or destroy, depending on our choices and desires.

This concept looms large in the series’ sixth volume, as Amu finds herself facing her own would-be self in battle. Yes, these mangaka have managed to create a literal fight between their heroine and a single piece of her inner self that is not only clever but actually quite stunning to behold. The children’s “character transformations”–magical incarnations of their would-be selves created by a bonding between them and their guardian characters–are a highlight of the series, and Amu’s transformation here is an enormous step forward for her. In the end, she discovers that believing in herself is what is truly important, even if she doesn’t yet understand who that is.

What draws me so to this aspect of the story’s premise, is that it contradicts the too-common idea that there is just a single destiny possible for any one person and that we must each choose one future for ourselves, no more, no less. Children these days are encouraged to make “permanent” decisions about their lives or careers earlier all the time, which is something I’ve found quite disturbing over the years. As someone who has already experienced several major career shifts in my life and explored many different versions of my would-be self, I suppose I feel akin to Amu, but my feelings about this go far beyond the personal. I really believe it is important to encourage children to acknowledge all their varied potential when they are young, and to make it clear to them that there is always possibility beyond what is right in front of them, even as adults. This series embraces that kind of thinking and that definitely contributes to my affection for it. It also doesn’t hurt that Amu’s would-be selves demonstrate that there is more to any girl than can be portrayed by a single stereotype. Between cheerful, athletic Ran, outspoken, artistic Miki, and girlish, nurturing Su, Amu can’t be placed into any neat shojo category (nor would she ever stand for such a thing) and that’s the kind of message I think young girls need to be getting from their fiction.

Another major theme in this series is cooperation, and that comes strongly into play in this volume as well. Just as Tadase finally achieved his first character transformation (“Platinum Royale”) in volume five, here the two remaining transformation-less Guardians achieve theirs as well, which is not only exciting but also frankly awesome (in the case of Kairi, whose “Samurai Soul” is beyond cool) and surprisingly cute (Yaya’s “Dearest Baby” uses a flock of rubber duckies as a weapon). Though Amu remains the most powerful of the group, as their enemies become more formidable, the children discover quickly that they always fight more effectively if they work as a team. This volume is quite action-heavy, containing at least two major battles. While this means that there is not as much page time given to thoughtful characterization in this volume, these battles are the culmination of all the careful plotting and character development the mangaka put into the first five volumes, and they provide quite a nice payoff. On a quieter note, something I mentioned in my review of volume five was how telling I thought it was that, despite his obvious personal conflict, Kairi was the one boy of the group able to appreciate and admire Amu for who she actually is (rather than who she might be), and this volume offers a major payoff in that area as well. Lastly, look for a subtle hint at the return of a beloved character who has been gone far too long!

As always, the art is a real highlight of this volume. Though this series adheres to the usual sensibilities of shojo for young girls–big eyes, sparkles, flowery backgrounds, and ornate paneling–it is done so cleanly and so well that it’s impossible not to admire it, even as a jaded adult. The style always adjusts to fit the character’s moods as well, as is most evident in an early scene with Rima, which is drawn in an uncharacteristically subdued manner, appropriate to her deep sadness at the time. The final chapter of the volume is honestly stunning, as both Amu and Utau achieve new character transformations, ending with a desolate look at Ikuto’s position that evokes true loneliness.

As this review becomes quite obviously over-long, I think it’s clear that I have a lot to say about this series, and I think my level of admiration probably comes dangerously close to hyperbole. It’s really satisfying, however, to read a series that makes me want to go on and on like this in praise. For those who think manga like Shugo Chara! is kids’ stuff (or perhaps more to the point, “girls’ stuff”) I urge you to set those preconceptions aside and give it a try. This series nicely demonstrates just how emotionally complex and genuinely moving sparkly, girly manga can be.