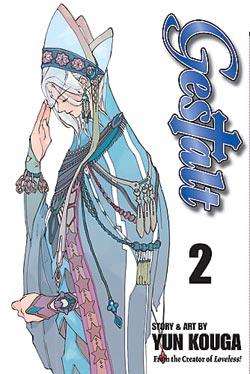 This volume begins on a fairly dramatic note, as Father Olivier is possessed by something clearly unfriendly and very powerful. Ouri manages to drive out the intruder (using a pretty interesting tactic involving an incubus whose usual role is as “the monster that gives you wet dreams”) and the group’s quest continues after a short break in which more background is given about Ouri’s personal mission and how she acquired female form. The real drama of this volume, however, involves fortune-teller Shazan, whose participation in a local tournament (the prize for which is an item needed for the group’s transport) causes his true identity to be revealed. The volume ends with both Ouri and stray elf Suzu facing dangerous foes who also happen to be their siblings.

Somehow, despite its rampant fan service and openly formulaic plot, Gestalt continues to charm me quite easily. Though I’m not crazy about the revelation that Ouri’s female body was given to her as a handicap (along with her reduced magical level and inability to speak) to keep her from easily overpowering her sisters, I am intrigued by the mission she’s involved in as well as her proclaimed love for Father Olivier. Most everyone in this series is more than they appear–that’s become obvious–but just how far this goes is anyone’s guess.

Another charming element is the series’ complete and utter honesty about the fact that it is playing out an RPG. The straightforward announcement of each character’s race, skills, and magical level continues, and in this volume they even visit a local shop to purchase magically-enhanced weaponry. It really seems like this kind of structure should be tedious but it’s hard to be irritated when the author is so up-front about it, and with a story so light and breezy, how can one complain? Humor is key in this series and there is never a moment in which things are allowed to become serious enough to obscure that.

The series’ main advantage, however, continues to be its characters, each of whom is immensely likable. Father Olivier remains my special favorite for his honest innocence and kindness, though brash, overconfident Ouri certainly comes in at a close second. Though it’s difficult to know just where things are going with her gender-switch scenario, it seems obvious that she genuinely enjoys being female, despite occasionally missing her former level of physical strength. Her romantic future with Olivier is unknown as well, though if it should ever advance beyond innuendo, it will be interesting to see how/if her gender issue is addressed in that context. Shazan has gained further intrigue in this volume with his newly-revealed identity, and new insight into Suzu’s past makes her extremely sympathetic as well.

Good-humored, forthright, quirky, and fun, Gestalt continues to be a refreshingly light and unexpectedly charming read.

Volume 2 of Gestalt will be available on August 18, 2009. Review copy provided by the publisher.