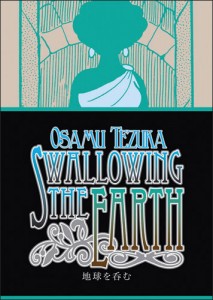 Like MW (1976-78), which was also serialized in Big Comic, Swallowing the Earth is an overripe, overstuffed period piece that’s both entertaining and frustrating for modern readers. The basic plot is simple: seven beautiful young women seek to avenge the untimely death of their mother by wrecking havoc on the political, social, and economic systems that robbed Zephryus of her money and her home. The only thing standing in their way is Gohonmatsu, a perpetually drunken longshoreman who’s immune to their charms.

Tezuka’s presentation of the story, however, is anything but straightforward, as he employs flashbacks, subplots, and red herrings galore to sustain the reader’s interest. Some of these gambits are so ridiculous and nervy they work. Zephyrus’ daughters, for example, team up with a female scientist to produce Dermoid Z, a synthetic skin that can completely transform a person’s appearance. From a manga-ka’s standpoint, Dermoid Z is a brilliant device, as it allows him to plausibly conceal his characters’ identities from the reader and the other actors in the drama, giving him latitude to do just about anything.

Other gambits flat fall, as they rely on outdated notions of gender and race for their dramatic impact. When Dermoid Z arrives in the United States, for example, African-Americans begin buying white “skins” in vast quantities, donning them to commit crimes, enjoy privileges that had been denied them, and exact retribution on their oppressors. White retaliation is swift and brutal, plunging American cities into a race war that destroys the very fabric of society. Lacking a deep understanding of American history, or the underlying causes of the 1968 riots that erupted after Martin Luther King, Jr. was assassinated, Tezuka’s subplot feels like a crude attempt to be topical. He’s grasped the basic injustice of segregation, yet he never humanizes his black characters; they remain a violent, faceless mob throughout this unfortunate episode.

Tezuka’s treatment of women is likewise muddled. He clearly recognizes that men have treated women as property throughout human history, a point he illustrates both through Zephryus’ story (which unfolds in Nazi-occupied France) and through an interlude in the South Seas, where a tribal chief barters with Gohonmatsu for a downed airplane, offering his two daughters in exchange for the machine. Yet Tezuka’s own notions of female sexuality frequently undermine his critique of male privilege. He depicts Gohonmatsu’s South Seas brides as sexual grotesques, with bodies as roundly deformed as the Venus of Willendorf’s and libidos that verge on nymphomania. Women from the developed world don’t fare much better, as Tezuka neatly divides them into two camps: man-hating hysterics (e.g. Zephyrus’ daughters) and tormented victims (e.g. a beautiful aphasiac who lost her ability to speak after she was raped).

However dated Swallowing the Earth‘s racial and sexual politics may be, it’s hard to deny the sheer exuberance of Tezuka’s artwork. His imagination yields some stunning — and stunningly weird — images. Zephyrus’ palace, in particular, is a marvelous creation, an Art Deco ziggeraut filled with enormous cat statues that look like they were swiped from Cleopatra’s tomb. Tezuka frequently experiments with the layout, varying the shape of the panels to suit the pace and intensity of the action, or to suggest the simultaneity of two events. One of the best examples occurs early in the story, when Gohonmatsu duels a handsome Spanish count on the deck of a tugboat: 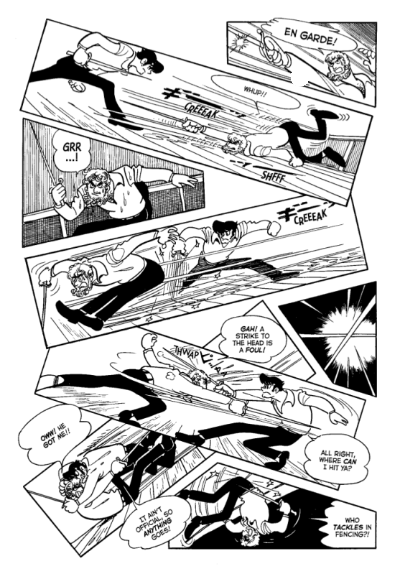 Tezuka uses diagonal panels to mimic the rocking motion of a ship anchored in choppy water. The shape of the panels also demonstrate just how difficult it is for both characters to find their footing on the slippery deck — a small but tricky detail that isn’t easy to capture in a static image.

In an excellent companion essay to the English-language edition, manga scholar Frederick Schodt acknowledges Swallowing the Earth‘s myriad flaws — its surfeit of plotlines, its racial caricatures — while celebrating the almost anarchic way in which the story unfolds. He encourages readers to enjoy Earth as a “wild ride” and a window into a critical period in Tezuka’s development, showing us “how he began to make the transition from a children’s artist to someone who could push the manga medium in every genre, even for adult readers.” It’s in this spirit that I recommend Swallowing the Earth, as testament to Tezuka’s fertile imagination, and his ability to grow as an artist and a storyteller.