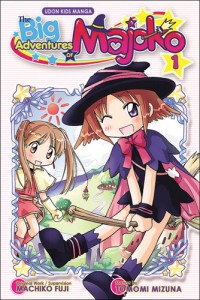 Tomomi Mizuna’s simple layouts are clearly intended for young readers, but she never skimps on the important details — costumes, backgrounds — that bring the stories’ fantastic settings to life. UDON has done a nice job of packaging Majoko, using a small trim size that’s well-suited to little hands and sprinkling the first third of the book with color pages. More importantly, the script is written at an appropriate level for second or third graders, making Majoko one of the few genuine all-ages manga on the market.

The bottom line: The Big Adventures of Majoko is a little didactic, but its fun stories and appealing characters make it a good choice for kids who are looking to graduate from picture books to stories with longer, more developed plot lines. 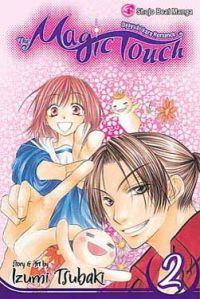 I attended a progressive high school that sponsored all kinds of after-school activities, from experimental theater to marching bands, but we never had a club as weird — or potentially beneficial — as the Massage Research Society, the organization to which the cast of The Magic Touch belongs. Its members practice accupressure and shiatsu on their fellow students to prepare for the annual Underground Massage Tournament, a secret competition among Tokyo’s best high school clubs. (Which begs the question: is massage a standard after-school activity in Japan?) Most of the drama in volumes one and two centers around Chiaki, a plain jane who uses the club to escape an unhappy home life. Though Chiaki is painfully shy and uncertain of herself (when she isn’t giving massages, that is), she catches the eye of Yosuke, a handsome classmate whose broad shoulders cry out for a good rolfing.

Their courtship is the stuff of pure teen fantasy: no matter how erratic Chiaki’s behavior may be, or how many babes hit on him, Yosuke never waivers in his devotion to her. Manga-ka Izumi Tsubaki manufactures some preposterous situations to test their relationship — kidnapping, anyone? — but each of these crises is resolved so swiftly that the story falls into a predictable pattern midway through volume one. The jokes, too, are predictable and surprisingly tame; Tsubaki shies away from the smuttier implications of her premise, instead presenting the club as a group of sweet, wholesome kids who dedicate themselves to helping others and perfecting their technique. I can’t believe I’m actually saying this, but I could see a role for a pervy character here, if for no other reason than to add some spice to this very bland series.

The bottom line: While I’d be happy to let Chiaki or Takeshi work on my trapezius, I don’t feel compelled to read more about their romantic travails. 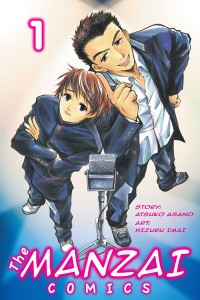 Takashi Akimoto is shy, pretty, and short; Ayumu Seta is tall, loud, and impetuous. Convinced that Takashi would make an ideal manzai partner, Ayumu suggests they develop comedy routines together. Takashi is initially reluctant to accept Ayumu’s offer, as Ayumu is a social klutz who lacks personal boundaries. With encouragement from classmates, however, Takashi agrees to partner with Ayumu in a manzai-style production of Romeo and Juliet, discovering in the process that Ayumu is more sensitive than his goofball persona belies.

Atsuko Asano’s script covers familiar ground, but yields some funny moments nonetheless. In the first scene, for example, Takashi misunderstands Ayumu’s request that the two “go out” together and panicks: is Ayumu coming onto him? Their dialogue reads like a BL version of Abbott and Costello’s classic “Who’s on First?” routine, as the two trade comments about “tops and bottoms,” “chemistry,” and “doing it well.” Though the prevailing tone is breezy, Asano reveals that Takashi has a dark, unhappy past that makes it difficult for him to accept his new popularity or trust Ayumu. The more serious scenes don’t always mesh gracefully with the comedy, but they give the story ballast, grounding Takashi and Ayumu’s friendship in something more substantial than a shared affection for puns. Hizuru Imai’s distinctive artwork won’t appeal to everyone, as her characters have pinched, vaguely alien faces and big, clumsy feet. Yet her layouts flow smoothly, capturing the rapid-fire pace of manzai comedy without becoming frenetic.

The bottom line: Despite a few melodramatic plot twists, The Manzai Comics is a genial, sweet story that should appeal to shojo and shonen-ai fans alike.