Last week at Experiments in Manga I posted two features in addition to the usual My Week in Manga. First up was the monthly giveaway. The winner will be announced on Wednesday, so there’s still time to enter for a chance to win the first volume of Leiji Matsumoto’s Queen Emeraldas. All you have to do is tell me a little about your favorite space manga (if you have one). Also posted last week was the long-form manga review for April. I took a look at The Girl from the Other Side: Siúil, a Rún, Volume 1 by Nagabe. The manga was one of my most anticipated debuts of 2017 and it is easily one of my favorites to be released so far this year. Last week was also the first week at my new job so I was rather preoccupied and busy with settling in there and so wasn’t online all that much. However, I did catch an interesting feature on the recent josei renaissance over at Anime Feminist. The article is written by Megan from The Manga Test Drive, one of the manga review blogs that I make a point to follow and particularly like.

Ghost Diary, Volume 1 by Seiju Natsumegu. My experience reading Ghost Diary was a little odd. I can’t say that I was overly impressed by the first volume while I was reading it, but by the time I reached the end I found that I actually had enjoyed myself and was interested in reading the rest of the short series. The individual elements of Ghost Diary aren’t particularly original, but as a whole it’s horrific fun. In some ways the manga feels like it’s a mashup of other existing stories which deal with the supernatural and the occult. Even the illustrations reminded me of other works, in particular some of CLAMP’s darker series. I was actually expecting Ghost Diary to be much more serious than it actually was. The manga definitely has a disturbing side to it, but to me it comes across as a dark comedy more than anything else. It’s both goofy and grotesque. The story follows Sukami Kyouichi, the youngest son in a long line of exorcists whose older sister (also an exorcist and far more powerful than he is) mysteriously disappears after he angers a god due to his inexperience, ineptitude, and ignorance. Now he’s desperately searching for her which proves to be a very dangerous venture.

Princess Jellyfish, Omnibus 4 (equivalent to Voluems 7-8) by Akiko Higashimura. At this point the Princess Jellyfish manga has progressed much further along in the story than the content that was adapted for the anime series (which was my introduction to the work). So far, my love for the series has yet to diminish. In this omnibus the women of the Amamizukan apartments (along with Kuranosuke) somehow manage pull off a successful fashion show which is intended, in a roundabout way, to save their home from being demolished and redeveloped. However, for that to work, their success will have to extend to actually launching the Jelly Fish brand as well, and reality is much more challenging than a dream. Princess Jellyfish is intentionally outrageous and comedic in the telling of its story but the underlying heart of the manga is believable earnest. I find the manga’s style of humor to be immensely entertaining, but probably what I enjoy most about Princess Jellyfish are its characters and their relationships with one another. I especially liked how Shuu and Kuranosuke’s brotherly affections were developed and portrayed in these two volumes.

Twinkle Stars, Omnibuses 1-2 (equivalent to Volumes 1-4) by Natsuki Takaya. Probably like most people, my introduction to Takaya’s work was through the series Fruits Basket, a landmark title in the North American manga industry. It would seem, then, that Takaya’s next major series, Twinkle Stars, would be an obvious license choice, but the manga only began to be released in English relatively recently. Other than the fact that Takaya was the creator, I actually didn’t know much about Twinkle Stars before reading it. The series turns out to be an incredibly compelling and emotionally resonant work even if some of the story developments do seem a little convenient and trope-worn. The lead of Twinkle Stars is Sakyua Shiina, an endearing highschool third-year whose outward cheerfulness goes a long way to hide her inner struggle with depression and self-worth, the result of a troubled family life. Fortunately, she now has people in her life who care for her dearly. Under some rather peculiar circumstance she meets and ultimately falls in love with Chihiro, a young man who likewise is left dealing with the aftermath of past tragedies. At times Twinkle Stars can be absolutely heartbreaking but this countered by the immense kindness that is also exhibited in the series.

Witchlight by Jessi Zabarsky. Before being edited and published in a collected edition with additional content, most of Witchlight had previously been released as a series of individual comic chapters. Described as a shoujo adventure, Witchlight is a delightful fantasy comic about the close bond of friendship and love which slowly develops between two young women as they travel together on a quest. They don’t start out on good terms, though. Sanja is kidnapped by Lelek, a candle witch who demands that she teach her how to use a sword. Lelek is searching for a part of herself that has been lost and magic isn’t always enough to protect her. While being abducted isn’t exactly a promising beginning to a relationship, Sanja is more curious than afraid and her good nature and openness has a positive influence on the untrusting Lelek who has kept her heart closed off from others for so long. Lelek and Sanja’s emotional journeys are the most important aspects of Witchlight, but their physical journey is also wonderful to watch unfold as they encounter other cultures and and types of magic. The characterizations, worldbuilding, artwork in Witchlight are all lovely.

Revenge: Eleven Dark Tales by Yoko Ogawa. I find the cover design and even the title selected for the English-language edition of Ogawa’s Kamoku na shigai, midara no tomurai to be somewhat misleading. Revenge, although it does make a few appearances throughout the volume, is not at all an overarching theme. And while there is death and violence, most of the gruesomeness implied by the cover occurs off-page. That being said, Revenge is a marvelously disconcerting work of subdued horror. Everything in Revenge is told from a first-person perspective, giving the collection a surprisingly quiet and contemplative atmosphere which becomes increasingly dark as the volume progresses. The individual stories can all be read and function well on their own, but what makes Revenge such a phenomenal collection is how they are all entangled with one another. Often the connections are tangential–similar turns of phrases and references are used, main characters and plot points from one story appear and reappear in the backgrounds of others, and so on–but sometimes they have a profound impact on the interpretation of the various narratives. A close, careful reading of Revenge is rewarded with the revelation of a complex, strange, and surreal web of the macabre. 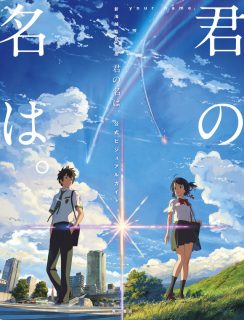 Your Name directed by Makoto Shinkai. Originally I thought I would be waiting to watch a home video release of Your Name but the film actually ended up being shown at one of my local theaters and a friend invited me out to see it over the weekend. Your Name is a beautiful film, both visually and thematically, and not quite what I was expecting. (Granted, I’m not entirely sure exactly what it was that I was expecting.) To me it almost feels like three different films have been merged into one. Initially Your Name is about Mitsuha and Taki, two young people who don’t really know each other but who have started to spontaneously and erratically switch bodies when they fall asleep. But when the switching suddenly and unexpectedly stops, the film changes its focus to Taki as he tries to locate Mitsuha, keenly feeling the absence of the close intimacy that the two understandably developed over time. From there the urgency of Your Name increases even more as Taki uncovers the truth and he and Mitsuha struggle to prevent further disaster and loss. In part a romantic comedy, in part a meditation on love and spirituality, and in part (it would seem) a response to the Fukushima disasters, Your Name largely remains cohesive even while bending and shifting between genres.

Welcome again to Saturday Spotlight, a new weekend feature dedicated to exploring the depths of the Manga Bookshelf archives.

This week’s choice is a fairly recent addition to our archives, but also especially relevant today. In the spirit of our currently-running Manga Moveable Feast, featuring Natsuki Takaya’s shoujo epic Fruits Basket it seems appropriate to shine this week’s Saturday Spotlight on Michelle’s recent review of another Takaya series, Twinkle Stars. Though Twinkle Stars has yet to be licensed in the US, it is available in English from Chuang Yi Publishing in Singapore, distributed by Madman Entertainment (Australia).

From Michelle’s review, “I thought I might be disappointed by this series. There’s no shortage of complaining Takaya fans online, after all, and it’s not like her other series Tsubasa: Those With Wings or Phantom Dream really knocked my socks off, though I did come to like the latter by the end. After having read these two volumes, however, I am left to conclude that the chief complaint of unhappy fans is that Twinkle Stars is nothing like Fruits Basket.”