the way of the househusband

The Way of the Househusband Volume 1 by Kousuke Oono

I was looking forward to The Way of the Househusband very much, because the title, premise, and subtly menacing cover art made it seem like just the type of action and humor manga I would enjoy. The househusband in question is a former yakuza member whose nickname was “The Immortal Dragon.” I think it is easy for a reader to tell if they will like this series from the first few pages, which show the househusband waking up, clothing himself grimly in all black, putting on an apron, and then making an adorable bento box for his wife. The househusband loves coupons, sales, and going to grocery stores while wearing his shibainu apron. Unfortunately his past has a tendency to catch up with him. While the Immortal Dragon still has the skills to administer a severe beatdown, often he disarms situations with his househusband hobbies by breaking through people’s emotional barriers with homemade cookies or a pair of deeply discounted gloves. 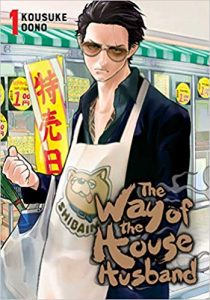 I particularly enjoyed the marriage scenes in this manga. The househusband’s wife is a designer who loves anime, and the lengths to which he will go to make her happy display the same relentless attitude that I’m sure helped helped him ruthlessly dispatch his enemies. It would be hard to pull off this title without solid art, and Oono excels at showing the househusband with epic resting bitch face that basically means that regular people find him terrifying. He seems to always be surrounded by film noir shadow effect lighting that throws his features in stark contrast. The larger format of the Viz Signature line makes it easier to appreciate the fight scenes taking place in mundane locations. I had high expectations for this title and I wasn’t disappointed.