I hadn’t realized before that this was only a two volume series! The second volume of SP Baby does exhibit some typical final second manga volume characteristics of plotlines going kablooie, but overall I enjoyed it as a peak into the possibilities of a slightly more lighthearted Maki Enjoji series.

Story wise, the pacing in this volume is a bit on the frantic side, as each chapter races through events that might have taken an entire volume to play out in a series with a bit more space. Tamaki deals with her infatuation for the florist next door, there’s an incident where she’s suddenly a maid for a short period of time, she continues to demonstrate her unerring bodyguarding instincts, the reader gets a little bit of information about Kagetora’s mysterious past connection to her, and a mysterious random fiancee is quickly disposed of. That’s a crazy amount of stuff to happen in one volume! Still, I liked the more comedic touch Enjoji brought to this series. Everyone’s Getting Married has me much more anxious about what will happen to the characters, but SP Baby was much lighter in tone, so I wasn’t reading every volume with a slight feeling of dread. 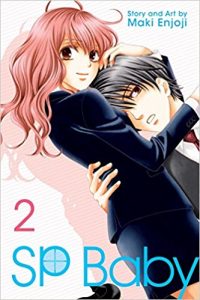 I enjoyed Tamaki’s frequent aggressive kicking and Kagetora’s intrinsic endearing weirdness and disconnection from reality. Enjoji’s art is always solid, easily portraying Tamaki’s swings of emotion from unchecked aggression to more tender feelings towards Kagetora. I really think that with 3 or 4 volumes and more time for the pacing to be more deliberate, SP Baby would have been so much better. As it is, it is a nice brief read that doesn’t quite come together in the end. Still recommended for fans of light and fluffy josei.

I’m a pretty big fan of Enjoji’s series Happy Marriage so I was excited when it was announced that Shojo Beat would be bringing out another series of hers. While Happy Marriage has an undercurrent of tension (spoiler alert! no one is getting married yet), the first volume of SP Baby is more of a comedic workplace romance.

Tamaki Hasegawa is struggling to find a full-time job. She needs to better support both herself and her little brother who is about to enter college. She has an ordinary life where one of the highlights is her helpless pining for her long-time friend Natsu who works in a flower shop. One day she sees one man chasing another on the street and jumps in to help by attempting a kick to the head of the threatening man. He promptly catches her ankle, leaving her at a loss on what to do next. After it becomes clear that the two men in question know each other, Tamaki apologizes for interrupting a lover’s quarrel and runs away. Her adventures are not over because the next day she’s shoved into a car carrying Kagetora Sugou, the man who she attempted to defend. He gives her a suit with a short skirt and announces that he’s going to interview her for the full-time job of being his bodyguard.

Kagetora is a nice contrast from Ryu in Everyone’s Getting Married. Kagetora is of course rich, but there’s an odd open-hearted innocence in his mannerisms and actions, like when he gives the people he works with nicknames that are usually reserved for cats. He alludes to having met Tamaki in the past, which is something that she has no memory of. Tamaki embarks on her new job, which necessitates dealing with some intense training in martial arts as well as finally getting her driver’s license. While it is obvious that her new boss is romantically interested in her, Tamaki keeps reminding herself of her so far one-sided affection for Natsu. 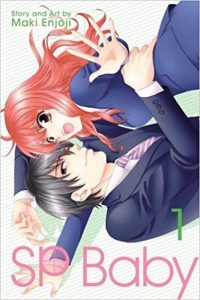 Enjoji’s art is always solid, and she easily captures the extreme emotions that Tamaki deals with as she ends up on an impromptu date with Kagetora or gives in to her lighting-fast violent reflexes. By the end of SP Baby, I was rooting for this very odd couple and wanting to see more of this story unfold. February is a long time to wait for the next volume! I recommend this title if you enjoy josei comedies with heroines who have a tendency to kick people in the head.