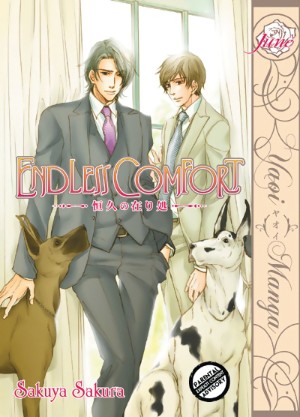 Endless Comfort | By Sakura Sakuya | Published by Juné | Rated Mature (18+) Buy at Akadot – Two years ago, when Masaki Kuzumi’s sickly mother finally succumbed to illness, his primary emotion was relief. Not wanting to confront these feelings, Masaki immersed himself in business in Hong Kong. Now, just shy of the second anniversary of her death, he has returned to the manor home he inherited a changed man. His friends remark that he is no longer as cold as he once was, and he is soon intrigued by Yuu Kanai, a seemingly easy-going dog trainer with some inner darkness of his own.

The path that Masaki and Yuu’s relationship takes is fairly straightforward and predominantly sweet. Yuu is good-natured when awake, but at night suffers terrible nightmares brought on by sexual abuse perpetrated by his stepfather when he was an adolescent. Masaki wants to help Yuu get over this, and very gently puts himself in the position to provide support when necessary, also achieving sufficient closeness to confess his own feelings about his mother’s death. Through the power of Masaki’s love, Yuu is able to overcome the terror of physical closeness, and an absolutely adorable epilogue chapter (featuring the show-stealing dogs) suggests a happy future.

There are definitely good things about Endless Comfort. Masaki is quite secure in his homosexuality and is upfront about it with Yuu, giving him the option to speak up if he ever feels uncomfortable. And, as mentioned, the dogs have a lot of personality. Unfortunately, quite a lot of the middle is pretty dull. The characters initially seem stiff, and some moments that should be dramatic—Yuu freaking out and crying, “Father, no, I don’t want to!”—are so stilted as to almost be comedic. Additionally, a side couple consisting of a pair of Masaki’s coworkers doesn’t add much to the story. The status of their relationship is confusing and I think the story would’ve been better off without them.

If I had to pick one word to decsribe Endless Comfort it would be “nice.” It’s a gentle story and a worthwhile read, but you might want to load up on caffeine first. 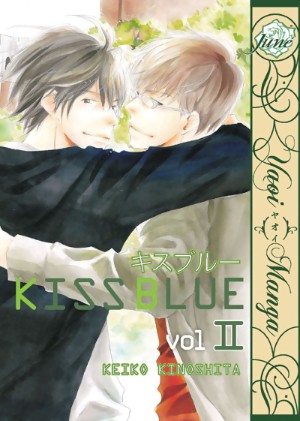 Kiss Blue, Vol. 2 | By Keiko Kinoshita | Published by Juné | Rated YA (16+) | Buy at Akadot – The first volume of this short series introduces us to Tomosaka, a quiet high school student who realizes he’s in love with his womanizing best friend, Noda. Though his eventual confession to Noda lands the two of them in bed, Noda’s inability to take their new romantic relationship seriously makes the encounter a regretful one for Tomosaka. Anxious to salvage the relationship they once had, Tomosaka asks that they return to just being friends.

As volume two opens, it becomes quickly apparent that this new arrangement is a strain for both of them. Struck with the impossibility of returning things to normal and unable to swallow his jealousy over Noda’s female conquests, Tomosaka waffles between repressed anger and forced apathy, leaving Noda confused and frustrated by his passivity. Complicating things further, Tomosaka is faced with romantic attention from both a female classmate and his openly gay boss, neither of whom he’s interested in. Can even accidental lovers ever return to being friends?

This series’ first volume was remarkable for its understated, intimate look into its characters’ emotional world and a sort of quiet ambiguity more characteristic of Bildungsroman than straight-out romance. Though the story’s premise is certainly nothing new, its thoughtful execution set it apart from showier romances. Thankfully, nothing has changed. Now in its second (and final) volume, Kiss Blue remains as intriguingly introverted as its protagonist, Tomosaka, favoring awkward kisses and inner monologue over sex and emotional theatrics–a sensibility enhanced further by Keiko Kinoshita’s sparse, wispy artwork.

“Intimacy” is still the series’ major characteristic, both in its style of storytelling and the relationship between its main characters, whose estrangement from and affection for each other are both driven by their keen awareness of each other’s personalities, for better or worse. Deeply flawed characters are usually the most interesting, and that goes for relationships as well, so it’s no surprise that the series gets its greatest mileage out of its characters’ failures, both as friends and lovers.

It’s taken over two years for this volume of Kiss Blue to appear, thanks to the first volume’s poor sales performance, according to this thread at the DMP user forums. Let’s hope that the release of its second volume will encourage new readers to take a look at this thoughtful little manga. Recommended. 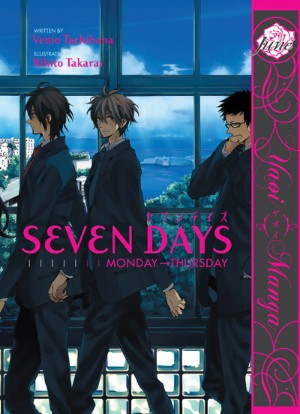 Seven Days: Monday-Thursday | By Rihito Takarai & Venio Tachibana | Published by Juné | Rated YA (16+) | But at Akadot – Each Monday morning, without fail, high school freshman Touji Seryou will agree to date the first girl who asks him, only to break up with her by the week’s end. Despite this unusual reputation, Seryou’s respectful treatment of his endless string of girlfriends keeps them in fresh supply. One Monday morning, curious about Seryou’s motivations, upperclassman Yuzuru Shino jokingly offers himself up as Seryou’s date for the week, only to be surprised when his proposal is accepted. As the volume continues, both carry on with the motions of their arrangement, neither quite sure of the other’s intentions.

Much like Kiss Blue above, what really makes this story work is its characters’ flaws and hangups, and how these affect their ambiguously developing relationship. As it turns out, Seryou’s hung up on his brother’s ex-girlfriend, whose aggressive pursuit of Seryou (both before and after the breakup) keeps him concurrently hooked and wracked with guilt. Given this, it’s unsurprising to discover that Shino’s domineering personality is striking a chord with him as well, awakening within him the first shreds of real attachment he’s felt since he began his bizarre dating ritual.

Meanwhile, Shino finds ways to make light of any burgeoning feelings on his part, while using his new influence over Seryou to make him show up to archery practice, forcing Seryou into displaying commitment for something in his life, while also possibly working through his own ambivalence for a discipline at which he once excelled.

There are a lot of layers to this odd little story, and though it’s unclear at this point how anything might be resolved within (presumably) just three more days, writer Venio Tachibana provides more than enough reason for us to want to find out. And though that reason includes school club drama, at least two love triangles, one wonderfully tough female character, and, of course, attractive archery uniforms, it’s still the story’s idiosyncratic leads who steal the show with a mountain of mixed signals, persistent defensiveness, and awkward moments of affection.

Rihito Takarai’s artwork is a mixed bag of expressive movement, dully similar facial designs, and moments of real beauty. Fortunately, the visual storytelling is strong throughout, making the most of Tachibana’s offbeat tale.

There’s still a lot of story to be told in this two-volume series. I, for one, can hardly wait ’til “Friday,” to see how it plays out. Recommended. 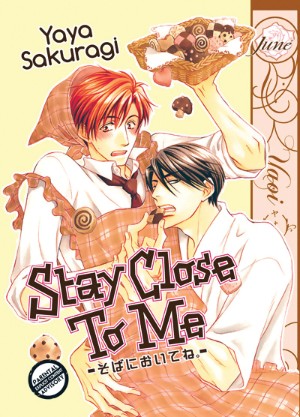 Stay Close to Me | By Yaya Sakuragi | Published by Juné | Rated Mature (18+) | Buy at Akadot – I don’t always fare well with BL comedies, which too often revolve around a bigger guy trying to manhandle a littler one at every opportunity. Happily, Stay Close to Me is not that kind of comedy.

Yuzuru Shibata and Issei Yogi have been close friends since elementary school, when Issei stepped in to save Yuzuru from bullies. Yuzuru has pretty much been in love with “Icchan” since that day, whom he regards as princely, and is “in training to be a homemaker.” Alas, a growth spurt has stymied Yuzuru’s efforts to feel like the proper princess, since at 6’0” he towers over the 5’8” Issei.

The couple stars in a quartet of episodic stories that derive their comedy more from the characters than wacky hijinks (though those do ensue). First, Yuzuru is oblivious to the true reasons the captain of the karate club is pursuing him, even though the guy has some terrifically cheesy lines like, “Today is the day I will seduce you… I mean… convince you to join the karate club!” Then he’s drafted to participate in a school play, receives a love letter from a girl, and finally is prevented from spending quality time with Issei when the latter’s brother moves back home. Each time, blunt but kind Issei ends up saving him in one form or another, though he informs Yuzuru he won’t be treating him like a princess, since he can handle himself.

I can easily see such a storyline irritating me if done poorly, but both Yuzuru and Issei are very likeable, and Sakuragi’s art is quite attractive, as well. The end result is a manga that is often silly—indeed, in her author’s notes Sakuragi writes “Please don’t think too hard while reading it”—but at the same time incorporates scenes of genuine emotion. A pair of similarly lighthearted stories featuring a ronin and a gambler round out the volume, and though our time with them is brief, it’s still enjoyable.

Stay Close to Me balances humor and emotion to become one of the few BL comedies I have genuinely liked.